Drainage Systems Boost the Lifespan and Functionality of Tracks

Facility operators who eschew installation of drainage systems jeopardize the lifespan and functionality of their tracks. 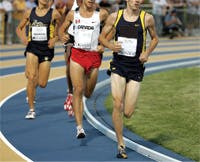 Bruce Lemons compares an outdoor track without a drainage system to a car without tires. Neither can function properly without its supporting components.

"Failing to put in drainage falls under the category of errors and omissions," says Lemons, principal of Foresite Design Inc., a Berkley, Mich.-based landscape architecture and site planning firm specializing in outdoor sports facilities. "It's a huge mistake if you don't have it."

During his three decades in the industry, Ray Wofford has come to the same conclusion. Nevertheless, Wofford, special projects executive with ACO Polymer Products Inc., the parent company of track drainage supplier ACO Sport, has encountered many outdoor sports facility operators who see things differently. "One thing I've noticed is that because the drainage system isn't something that people see every day - it's not a fountain - when the budget gets tight, they take it out."

Acknowledging the daunting installation costs of a new track surface - which can run up to $400,000 - Wofford warns about the hidden costs that can come from long-term repairs to perennially soaked tracks. "You can take drainage out of the system, but you're taking years off the life of that track," he says, citing the phenomenon of ponding, which causes synthetic surfaces to stain and delaminate. "If you don't spend the money on drainage up front, it's going to cost you 10 times that amount later. You're just robbing Peter to pay Paul."

Recognizing that alone won't guarantee salvation from a soggy surface. To preserve and extend the longevity of a track, its drainage system must be properly designed and installed. Wofford strongly recommends consulting the industry's leading outdoor athletic surface design and installation specifications, published separately by the American Sports Builders Association and the International Association of Athletics Federations (according to Wofford, the IAAF's guidebook offers greater detail on track drainage).

"That's my first suggestion to anybody - architect, engineer, landscape architect, or for that matter, contractor," he says. "There are a lot of people in this business who have never dealt with tracks and fields - the actual layout of a track and the tolerances you have to keep. You have to set the drainage at the same elevation all the way around the track - it can't be a half-inch low on one side and three-quarters-of-an-inch high on the other."

Just as track drainage systems deserve the full attention of operators and designers, they also warrant full coverage. Drainage systems circling the entire infield perimeter of a track not only ensure a smooth and safe transition between the track and infield, but also function as a barrier that prevents debris and sediment from running off wet fields onto the adjacent track surface. "When I say `perimeter drainage system,' I mean all 400 meters of the track," says Wofford. "There are some people who think they just need drainage in the radius areas, the `Ds.' But they need it all the way around."

On the other hand, be aware of the different drainage needs of tracks encircling natural-turf fields and those surrounding infill synthetic fields, as the drainage systems installed beneath some types of infill fields can significantly lessen demand for dedicated track drainage. "The aggregate material underneath actually enhances detention and retention capabilities," says Lemons. "Infill systems are beneficial in reducing the amount of runoff."

Lemons recalls advising one client who installed an infill system, but still insisted on trough drainage at the meeting point of his field and track surface. "The field's drain collectors and aggregate material were going to be more than able to handle that runoff," he says. "To me, the trough drainage just added $40,000 to his cost."

Facilities with outstanding field drainage systems may be better served if their operators are instead more attentive to the drainage needs of their tracks' ancillary areas, such as long-jump pits. "If you aren't, you could effectively create quicksand. Even though they're only 18 inches deep, those pits will be rendered unusable," says Lemons. "On our designs, we have a six-inch line that ties into a drainage system somewhere, just so the sand stays relatively dry."

Staying dry should be the aim of all outdoor track operators. With that in mind, Wofford likes to refer to the IAAF standard that requires international competition tracks to be ready for use only 20 minutes after receiving heavy rain. "The IAAF is looking at it in two ways: one, they want to protect your investment in the surface and, two, they want to get the water off the track so that you can get back to business - running races," he says. "A lot of people don't know about that rule. But if you think about it, if there's not a proper drainage system the water could stand and you would have to get 20 people out there with squeegees."