This has been a tremendous year for the youth sports staff at the Joint Base Elmendorf-Richardson (JBER) Youth Sports Program in Alaska. A joint-base merger of armed services and a wealth of updates to programming and facilities have provided both challenges and opportunities, resulting in a high-quality youth sports program for local families.

As a result, JBER Youth Sports is one of five recipients of the 2011 Excellence in Youth Sports Awards presented by the National Alliance for Youth Sports and Athletic Business. The awards recognize five youth sports programs every year for doing superior jobs of conducting diverse activities with a focus on providing safe and positive experiences for all participants - including children, parents and coaches.

"The biggest challenge we faced this year was the merger between Elmendorf Air Force Base and Fort Richardson," says Paul Caron, JBER's youth sports and fitness director, who had to break down the "us versus them" attitude that had been going on between the bases for years. "We deliberately created our teams with both Army and Air Force coaches and mixed the teams with children of parents from both services." Games and practices also are scheduled evenly on both bases in an effort to keep things fair.

Caron reports that, after some initial rough spots, the merger has gone smoothly. "Now, the kids, coaches and parents have built up friendships within both services," he says. "It's not a divided community anymore."

Caron found that by introducing new sports like volleyball and cheerleading for flag football, as well as bringing back Little League All-Stars, program participation has increased by as much as 45 percent. More than 1,500 youngsters currently play on JBER teams, and that may increase in 2012 with plans to add an NFL Punt, Pass and Kick camp and the NFL Play 60 program, plus a possible Olympics-style "sports day" with track and field events.

Another factor in the participation increase may be the effort Caron and his staff have put into providing a better playing environment. They now contract with paid scorekeepers and officials, which has improved the caliber of activities. "It helps to have an experienced official controlling the game," Caron says. "Parents tend to believe an official about a questionable play more than another parent."

Caron also credits recent successes to the recruiting and training of volunteer coaches. JBER Youth Sports abides by the NAYS-affiliated National Youth Sports Coaches Association, which provides a thorough education on topics such as the psychology of coaching youth sports, communication, child abuse, injury prevention, nutrition and hydration, as well as skills and drills specifically applicable to the sport each coach oversees. Since 2010, JBER Youth Sports has trained more than 400 volunteer coaches.

The organization also provides coaches' shirts with three simple adult rules listed on their back: 1. Make it FUN! 2. Set a good example! 3. Cheer for everyone! "I have witnessed coaches deal with parents being a little loud just by pointing to the back of their shirt," Caron says. 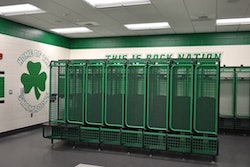 Arslan Guney, a 71-year-old grandfather (also known to friends as the Mayor of Pickleball), was arrested in March after he used a permanent marker to draw small lines on a gymnasium floor to indicate where workers at Denver’s Central Park Recreation Cente
August 8, 2022
Athletic Training

Boise State has finalized plans for an Athletics Master Village that comes with an estimated price tag of $300 million.
August 8, 2022
Facilities

Take a look at three community recreation projects to add a skatepark, double the size of the area rec center plus a brand new ADA-compliant inclusive playground...
August 5, 2022
Stadium & Arena

As preparations are made to tear down RFK Stadium in Washington, D.C., officials in charge of the demolition want to ensure fans have a chance to purchase a piece of history.
August 4, 2022
Rec Center

Parks officials in a California community said they are hoping to promote positive uses of its amenities and facilities after multiple fires in recent years have destroyed public property...
August 4, 2022
Fitness

A man who was working out inside a fitness center in Texas was shot and killed on Monday, and a person related to the incident is in custody, authorities say...
August 3, 2022
Rec Center

Inside Fetzer Hall, a recreation center on the campus at the University of North Carolina at Chapel Hill...
August 3, 2022
Page 1 of 497
Next Page
Buyer's Guide
Information on more than 3,000 companies, sorted by category. Listings are updated daily.
Learn More
AB Show 2022 in Orlando
AB Show is a solution-focused event for athletics, fitness, recreation and military professionals.
Learn More