Ohio University is fielding some debate over the construction of the new Perry & Sandy Sook Academic Center, an academic support space dedicated to the campus’ 425 student-athletes.

Opposition to the project has been vocal about prioritizing the academic needs of the entire university and refraining from segregating student-athletes from the bulk of the student body.

“A designated study space for student-athletes is common on college campuses to assist them in meeting the unique and stringent academic standards required by the NCAA in order to be eligible to compete,” Schaus said.

“The efficient new space provided by the Sook Academic Center, which is entirely funded by intercollegiate athletics, is critical for our students to graduate plus maximize their academic and career potential.”

Student advocates are also weighing in on the subject. Emily Deering, vice president of the Student-Athlete Advisory Committee (SAAC) and representative athlete on the Student Senate, told The Athens News that having a dedicated study space for student-athletes makes it easier to enforce mandatory study hours.

“One of the biggest advantages to having the Sook Center would be to have better capabilities to enforce the study-hall hours and to encourage athletes to have better study habits,” Deering said.

Other students feel that the funds could have been used for a facility to accommodate everyone, while including a dedicated space for student-athletes.

OU junior Blake Milore said, “I think that lots of students feel that in America, for some reason, we value athletes more than other students no matter what. We have all different types of people here at OU, and no students get the same kind of attention that student-athletes do, and I just feel like that’s unfair all around.”

Despite being voted against by the Faculty Senate twice in the past, the facility now has the go-ahead to break ground on campus in August.

Private donations account for $5.7 million of the building’s funding, with $300,000 provided by the OU Athletics reserve fund and $100,000 coming directly from the university. 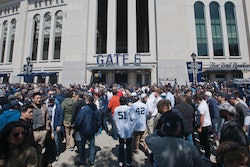 The Denver Parks and Recreation Department is warning pickleball players that they can be ticketed if they shovel snow from public courts.
December 1, 2022
Page 1 of 514
Next Page
AB Show 2022 in Orlando
AB Show is a solution-focused event for athletics, fitness, recreation and military professionals.
Learn More
Buyer's Guide
Information on more than 3,000 companies, sorted by category. Listings are updated daily.
Learn More