The Republicans proposed tax overhaul could affect funding of a new stadium that will be home to the NFL’s Las Vegas Raiders.

The new plan includes a provision that ends tax-exempt status on bonds used to fund stadiums for professional sports teams. That rules would have a significant impact on funds being raised to build the Raiders’ 65,000-seat, $1.9 billion stadium.

A staff adviser to the Las Vegas Stadium Authority and the Southern Nevada Tourism Infrastructure Committee, Jeremy Aguero of Applied Analysis, told SF Gate that he’s been flooded with calls about the new tax plan.

“The stadium, as designed, appears to meet the definition of a project that could not use tax-exempt bonds,” Aguero said Friday. “That could potentially affect the financial models we have been using in estimating the potential cost of the project.”

Aguero said the new tax plan would likely mean an increase in the bond interest rate and either make the project more expensive or decrease the yield. 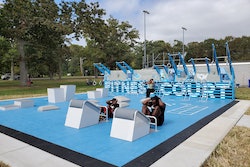 Arslan Guney, a 71-year-old grandfather (also known to friends as the Mayor of Pickleball), was arrested in March after he used a permanent marker to draw small lines on a gymnasium floor to indicate where workers at Denver’s Central Park Recreation Cente
August 8, 2022
Page 1 of 497
Next Page
Buyer's Guide
Information on more than 3,000 companies, sorted by category. Listings are updated daily.
Learn More
AB Show 2022 in Orlando
AB Show is a solution-focused event for athletics, fitness, recreation and military professionals.
Learn More