Arrowhead Field Torn Up Ahead of AFC Championship

The Chiefs are getting their house in order as they prepare to welcome the New England Patriots to Arrowhead Stadium for Sunday’s AFC Championship game.

According to a report from Boston’s Channel 98.5, the Chiefs are doing some major repairs to Arrowhead's notorious natural grass surface.

Video footage taken by 98.5 from high in the stands at Arrowhead shows the grass in one end zone has been completely removed.

The Stadium’s natural grass field has been a matter for discussion this week given the Patriot’s went 1-4 on grass fields this season, and 31-21 on such surfaces since 2007.

Former Patriots linebacker Jared Mayo told NBC Sports that he thinks the field will be a big factor in Sunday’s game. Mayo was a part of the Patriots team that lost to the Chiefs 41-14 at Arrowhead back in 2014. Mayo recalled the field being a big problem in that loss.

"It was a huge problem,” Mayo said, “the grass would just come up all the time. I remember missing a tackle on the sideline, and I really just couldn't stop. It was like having tires with no tread."

The weather Sunday could also be a factor, as the forecast currently calls for below freezing temperatures. 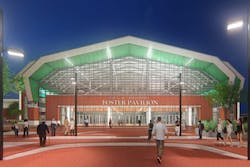 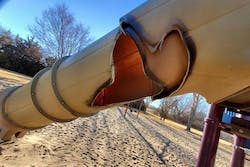