Modular sports flooring has come a long way since its introduction in the 1970s, thanks to the tiles' evolving versatility and portability. 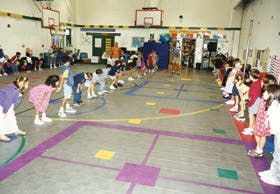 The symmetrical design of the colorful modular-tile gymnasium at Canyon Creek Elementary School in Austin, Texas, helps keep order in classes with up to 60 children.
When the Round Rock (Texas) Independent School District built Canyon Creek Elementary School in the mid-1990s, physical education and wellness instructor Frank Tighe asked district officials if he could select the floor for the school's 60-by-40-foot gymnasium. They agreed, but wood was not an option. So rather than choose a poured synthetic surface, colored carpet or even painted concrete - floor materials then popular in the district - Tighe opted for bright, 10-inch-square, plastic modular tiles.

He created a customized geometric floor design involving multiple lines, squares and circles using three primary colors (blue, red and yellow) and three secondary colors (green, purple and orange) on a gray background accented with black. All of the floor's elements were symmetrically spaced and equally sized, making it easy for Tighe to organize activities for his classes - which can be as large as 60 students each - quickly and effectively.

"When you have a bunch of little kids moving around in a relatively confined space, and you want them engaged in vigorous and dynamic activity, you've got to manage your space well," says the 39-year teaching veteran who used to rely on colored tape, paint or indelible markers to accomplish what modular flooring has allowed him to do quite naturally. "For example, I can ask everybody to jog in place on the color blue. That means they can find a little square that is blue, a segment of a circle that is blue or a bar on the sideline that is blue. So they have the opportunity to do some critical thinking, and since they're doing it on the move, it becomes an even more engaging task." 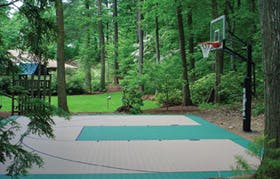 Modular sports flooring's roots lie in outdoor applications, where it initially replaced cracked and weedy tennis and basketball courts.
Engaging" is not a word often associated with modular sports flooring. Although the flexible and interlocking polypropylene tiles were first introduced in the '70s as a high-end outdoor surface most commonly used to replace cracked and weedy tennis and basketball courts, the surface was regarded as a second-tier product when it moved indoors in the late '80s. "When we were trying to sell a gym floor to somebody, it just didn't sound very good to use the word 'plastic,' " says one longtime modular sports surface manufacturer. "It did not have an engaging connotation, so we've had to create credibility for the modular flooring industry."

Slowly but surely, that has happened. Modular sports flooring is now considered an affordable alternative to wood flooring and a more desirable option than vinyl composition tile (a finished flooring material primarily used in commercial or institutional applications). The low-maintenance, shock-absorbent 10-, 12- and 18-inch squares usually cost less than $5 per square foot and fill many niches. Their multipurpose nature allows them to be installed, repaired and replaced quickly and easily over existing surfaces without the use of adhesives. (Most modular floors are pieced together on a two-millimeter-thick recycled-rubber underlayment that lends resiliency and sound absorption.)

The floors boast subtle nuances - for example, surfaces can be perforated or solid, smooth or textured - and have proven particularly effective in facilities with recurring moisture problems or high humidity issues that prohibit the use of wood. Modular installations also can be permanent or temporary, offering owners of rented facilities the option to take their surface with them upon termination of a lease. Additionally, the colorful tiles create numerous programming and marketing options for a variety of facility types. 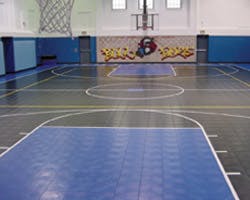 Facilities like this Boys & Girls Club in Champaign, Ill., use carefully selected tile patterns to accent their gymnasiums with attractive color combinations.
Indeed, indoor modular flooring now serves as common ground for health and sports clubs, public recreation centers, schools, YMCAs, Boys & Girls Clubs and other similar facilities. But part of modular flooring's recent popularity should be credited to its high-profile (and portable) presence at one-time-only events such as local and regional indoor and outdoor volleyball, basketball and inline tournaments; championships sponsored by the NCAA and other national governing bodies; and interactive fan experiences at professional sporting events.

The industry's growth has not come easily, though. Significant trial and error marked product development - a modular flooring pioneer recalls spending hours using a putty knife to separate tile pieces after an early promotional event - and, not unlike what's happened within the synthetic turf industry, the market has become overcrowded with competitors carrying varying degrees of credibility. The result, observers say, is misinformation regarding modular flooring's performance characteristics, maintenance requirements and even applications.

"I think everybody outside the industry sees a flat piece of tile and says, 'This is a cakewalk,' " according to another manufacturer. "That creates a lot of confusion for owners and managers who need to be educated about what types of floors are going to work best for their facilities in the long term."

Until recently, many athletic facility operators sought only wood for their athletic flooring needs. As one modular sports surface maker says, "How many times did we hear, 'We went for the cheapest wood floor we could get, because we wanted the look of wood'? So, because the customer wanted something that looked like wood, we made something that looks like wood."

Consequently, manufacturers have added larger-paneled wood-grain patterns - including plank and parquet - to their lines of solid- and mixed-color flooring. Popular in facilities such as churches and law-enforcement centers, where space serves both recreational and professional needs, the realistic wood look also has become more palatable as a surfacing option for dance studios and basketball purists. Some manufacturers even report that the faux hardwood accounts for as much as 30 percent of all their modular sports flooring sales. (Rolled-vinyl flooring manufacturers also have adopted the wood look, making that surface more marketable, too.)

Modular flooring's low-maintenance characteristics often give its operators the false sense that no maintenance is required. But many modular surfaces lose their vibrancy and sheen simply through improper or inconsistent care.

Suppliers recommend facility operators take the same preventive maintenance measures with modular surfaces that they do with hardwood floors. For example, facility owners should prohibit or limit food and drink consumption on the flooring, require proper footwear and lay down rugs or mats outside of the activity area to allow users to remove dirt and other debris from their shoes.

Daily dust mopping, broom sweeping or even vacuuming is recommended, as is heavier-duty cleaning on an as-needed basis - that may mean weekly in some facilities, or every other day in others. The use of automatic floor scrubbers that also are used on other tile and commercial flooring surfaces is acceptable, as is a wet mop with a bucket of water and neutral pH cleaner. The final and most crucial step in the process - and the one most often skipped by maintenance crews - is rinsing the surface with fresh water, rather than letting it dry with a coat of cleaning solution on top of it. Manufacturers liken that approach to someone washing his or her vehicle in the driveway and then going inside to take a nap without rinsing away the residual soap and dirt.

Unlike most weight room and some locker room flooring - not to mention a plethora of everyday plastic products - modular tiles usually are not made of recycled material. Granted, the tiles' underlayment is typically comprised of recycled material, and a modular floor can be recycled at the end of its own life cycle because of the zero-VOC content. But the tiles themselves commonly come from virgin materials.

"People will ask us if we can make flooring out of recycled materials," one manufacturer says. "The answer is yes. So they get excited and start talking about all the colors they want. Then we have to politely tell them that because we would be using recycled materials, which would be a mix of all colors, the only thing we could do is add some black concentrate and make the surface all black. A person who is willing to accept the color limitations of a recycled product can have it. But that person will be in the minority."

Indeed, color options usually trump environmental concerns - although some facility owners have opted for color combinations that include recycled black. Still, debate exists within the industry about whether the use of any recycled materials degrades the tiles' durability.

Another misconception about modular sports floors is that the tile seams become debris collectors. Food service is not a recommended application for the surface, even though simply popping out soiled tiles and cleaning them can remove crumbs and spilled liquid. But what facility operator has time for that? 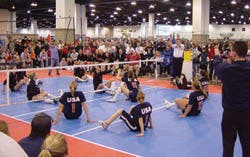 Portable modular tile provides a suitable playing surface for a variety of activities, including a scrimmage involving the USA women's sitting volleyball team at a Colorado tournament.
In environments where food is not served, however, the seams of most modular systems have proven to accumulate little noticeable dirt or other debris. In fact, one manufacturer recalls offering a free annual floor cleaning to his first middle-school customer, during which he took the floor apart piece by piece. "After pulling up a few large 15-by-15-foot sections, we found nothing," he says. "We put the floor sections back, and I went home."

Basketball, volleyball and futsal players, as well as inline skaters, have remained loyal to modular flooring for years - manufacturers in the inline industry even developed a softer wheel exclusively for use on indoor modular rinks. But the newest activity to spur the growth of modular surfaces could be ball hockey. Popular enough in Canada to warrant its own national governing body, the sport (also called "dek hockey" and "street hockey" in the United States) is played with a ball and athletic shoes, not a puck and skates, on rinks similar in size to those for inline or ice. More youth and adult leagues are developing throughout North America, particularly in the Ontario area and along the East Coast of the United States.

In addition to new applications, wood-like finishes and portability popularity, other recent milestones in the modular flooring evolution include the introduction of enhanced interlocking features; thicker, lighter and more flexible tiles; and the transfer of logos into the surface during the manufacturing process. More innovations are on the way, too. Manufacturers are keeping quiet about specifics, but don't be surprised if new product developments surface within the next 18 months.

As one manufacturer concludes, "There's no perfect floor in any segment of our industry. But the gap between wood and modular is closing a little."