When outfitting a locker room, a few simple upgrades can enhance functionality and aesthetics. 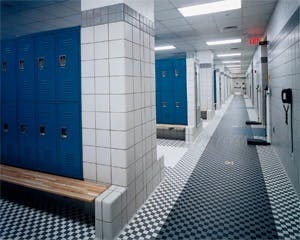 Baseball players at Southern University in Baton Rouge, La., will soon be heading for home - or at least more homey surroundings. In May, state legislators budgeted $1.5 million for the expansion of Southern's on-campus baseball venue to include new locker rooms, coaches' offices and weight-training facilities. "We're dealing with $1.5 million, so we can't get too extravagant," says SU head baseball coach Roger Cador, who personally brokered the deal with lawmakers and expects to have a hand in the expansion's design. "Obviously, we'll have something nice that will last a long time."

For Jaguar players who have grown accustomed to changing their clothes in a parking lot, anything with four walls and a roof will seem posh by comparison. But outfitting locker rooms is not the straightforward exercise it was only 10 years ago, according to interior design experts. And that goes not just for the changing spaces occupied by varsity sports teams, but for recreational locker rooms, too.

"It's not unlike the evolution of bathroom design in homes," says Stephen DeHekker, vice president of St. Louis-based Hastings & Chivetta Architects. "People request and expect locker rooms that are more appealing and have a higher level of finish than traditional austere and utilitarian spaces."

While athletic teams typically take ownership of their locker rooms (indeed, lockers labeled with players' names establish accountability for their condition), changing areas in fitness and recreation centers tend to be underutilized - with patrons choosing to come and go in their workout clothes, then shower at home. The challenge for facility operators is to make locker rooms so appealing that patrons take full advantage of all that is offered them onsite. Says Keith Hayes, a vice president and principal at Barker Rinker Seacat Architecture in Denver, "It has been said that the locker room has to be as nice or even nicer than your home bathroom for you to use it."

Designers have been doing their part to make locker rooms more aesthetically inviting and functional, with as many comforts of home as possible. Whereas private shower areas first saw widespread use in women's locker rooms, they are now replacing gang showers in most men's locker rooms, as well.

Meanwhile, product manufacturers have introduced amenities that rival or surpass anything found in the average residence. In private shower areas, these may include a built-in step for women to facilitate leg shaving, bowed curtain rods that provide all users more elbow room, and wall-mounted body soap, shampoo and lotion dispensers. Other common locker room appliances include wall-mounted automatic hair and hand dryers, as well as swimsuit extractors and state-of-the-art scales. "They all add cost to the project, but not significantly," DeHekker says. "And these generally are amenities that people now expect."

Moreover, grooming counters - featuring a mirror, shelf and outlets for electric razors or personal hairdryers - can be introduced to help the space exceed users' expectations. DeHekker favors vanity lighting along a mirror's sides as a value-added touch. "Placement of light fixtures in grooming areas, in particular, can not only make the space look more upgraded, it also provides users with a more flattering light," he says.

That said, the most well-appointed locker room won't see much use if it isn't well maintained. "No matter what we do as designers, ultimately the staff has to keep it clean," Hayes says. Consideration must be given not only to materials selection - certain locker and toilet partition surfaces are purported to resist graffiti and the spread of bacteria, for example - but to mode of installation. Movable locker benches or fixed benches that cantilever out from moorings at the locker base facilitate floor cleaning, and the same can be said of ceiling-suspended toilet partitions. Sinks that are bracket-mounted beneath the countertop (as opposed to dropped into the cutout from above) provide a clean appearance and easy, squeegee-assisted maintenance.

Some see boldly colored porcelain fixtures as a way to class-up the locker room, while others see only a never-ending maintenance battle against water spots. In addition, "if a fixture needs to be replaced, those colored glazes sometimes come and go, but white is always in," Hayes says. "White goes with anything."

Lockers, partitions and countertops best lend themselves to color, Hayes adds, with materials selection often dictating the range of color available. Moreover, specifying a certain color of flooring tile rarely raises its cost, but can add a lot to the locker room's overall aesthetic. "Just by changing those colors - with a very modest cost increase or without increasing the cost at all - you can significantly alter the appeal of the space," DeHekker says.

Faux marble and granite patterns can also be specified for certain locker room surfaces, and wall paint colors can be updated inexpensively and as frequently as regularly scheduled facility maintenance shutdowns.

In the end, however, a consistent aesthetic should be carried throughout, according to DeHekker, right down to the size and look of trash receptacles and the finish on message-board frames. While nine facility operators out of 10 may prefer the look and feel of a naturally finished maple bench when compared side-by-side to a solid-color phenolic bench, they must consider how the selection will fit within their overall design context. They may ultimately opt for the phenolic bench, not because it's less expensive and potentially less maintenance-intensive, but because it's the ideal complement to their phenolic lockers. Others may see the maple bench as their best opportunity to infuse the locker room with the warmth of natural wood, albeit in a limited way.

"That choice becomes a matter of two things: one is personal preference; the other is how the item fits into the design concept of the locker room," adds DeHekker. "These are decisions that facility operators should make with the overall locker room environment in mind. If they address each item in this context and think those selections through in terms of function and aesthetics, they can really contribute to the overall enhancement of the space."