Facility operators and designers are rethinking the locker room -- bringing lockers to building users, Rather than the other way around.

At many colleges and universities, recreation centers have taken the place of student unions as the premier destination point on campus. Residential and commuter students alike often make them their homes away from home. For proof, look no further than the expanded lounge areas, dining options and audio and video innovations that abound in contemporary facilities. They make working out (and hanging out) as convenient as possible.

Users, however, do not treat every amenity-filled space equally. Locker rooms, although more inviting than a decade ago, receive increasingly short shrift from individuals who opt to shower in their own living quarters. Many of today's college students no doubt grew up with private bedrooms and bathrooms, and consider complete privacy nothing less than a given right. Indeed, this trend away from showering on site is already well established. As early as 1996, The New York Times reported that "among American students these days, one thing is considered way too weird: showering with classmates after gym."

But today, other user groups - including deconditioned individuals - avoid locker rooms because they feel uncomfortable and vulnerable in such an open environment. Consequently, patrons (who often arrive at the recreation center dressed in their workout clothes but burdened with backpacks, duffel bags and other belongings) are searching for other safe places to stow all their stuff. The trend has forced facility operators and designers to rethink the locker-room concept, stretching the boundaries of locker space by installing or retrofitting alternative locker spaces into corridors, lobbies, fitness rooms and other populated areas. The actual number of available lockers remains the same; they are just more widely distributed.

Such a strategy not only encourages use by existing members, it also makes a recreation center more appealing to sedentary individuals who might otherwise avoid working out, allows for the renovation of unused locker-room dry areas and creates new potential revenue streams.

Choices, Choices
When considering which locker styles work best outside of a traditional locker-room environment, there are five major choices:

The most aesthetically pleasing alternative lockers are constructed of wood-grain plastic laminate and installed flush with the wall; bolt-on lockers with either flat or sloped tops are generally the only option in retrofit applications. That said, a variety of locker materials, vent sizes and placement options are available - just as in traditional locker-room environments. Selection should be based in large part on the climate in which a facility exists (extra ventilation may be required in wet locales such as Seattle and Boston, for example) and user demographics (commuters need more personal storage space because they often bring more with them to campus). 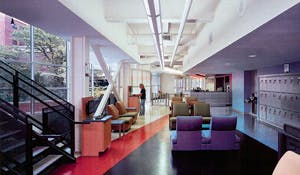 No clear-cut, scientific formula exists to determine how many non-locker-room lockers should be installed throughout a recreation center. But a good rule of thumb is to provide enough lockers to accommodate 10 percent of the school's (not the facility's) student population. More often than not, though, the final determination is made on gut instinct just as much as by following a specific formula.

In retrofit situations, where locker-room usage patterns are known, it's possible to determine the average number of typically unused lockers and install a similar number of alternative lockers elsewhere in an attempt to provide more convenience and encourage additional facility usage. That also clears the way for the conversion of a locker room's unused dry areas into extra office or storage space, or even a small fitness studio, massage-therapy room or study area.

Placement of alternative lockers must reflect the needs of the facility's users, who want easy access and safe storage. With that in mind, among the locations that make the most sense from both accessibility and security standpoints are lobbies, corridors and dance/fitness studios.

Regardless of their location, locker break-ins and damage are all-too-common occurrences. But vandals and thieves will be less prone to act in populated areas where they're likely to be seen. Control desks are intentionally positioned where employees can view other areas of the facility, including nearby banks of lockers. Wallet/key lockers, especially, should be sited in clear view of desk employees - perhaps even adjacent to the desk.

By installing lockers near entrances, lounge areas and even concessions spaces, facility operators also are subtly encouraging patrons to spend more time in their buildings. This approach is particularly effective on commuter campuses in which the recreation center serves as a main thoroughfare to academic buildings and other campus locations. Consider the commuter student who does not typically work out at the facility but makes his or her first stop of the day at the rec center's juice bar while passing through on the way to class. That individual may decide it's more convenient to store many of his or her belongings in a nearby locker than lug them around most of the morning. If he or she follows that routine often enough, passing by the facility's inviting exercise areas, energetic fitness classes and active social environments may eventually convince that person to spend more free time there. The same scenario also applies to deconditioned individuals who otherwise would not enter a recreation center. In other words, strategic placement of alternative lockers can break down barriers to facility usage.

Another popular locker location is in fitness and dance studios - specifically along walls near the doors, where program participants can easily keep an eye on lockers and would-be thieves are deterred by the area's high visibility. Open or closed cubbies (with or without benches) work particularly well in these environments, and because most cubbies are not metal, they are a quiet and welcome option in an instructional environment.

Installing locking cubbies and other types of lockers throughout a building, however, can create the same problem facility operators have encountered for decades in traditional locker rooms: Patrons who use them beyond their day-locker intentions. Recreation center operators who take regular after-hours strolls through their facilities, bolt cutter in hand, now will have even more areas to visit to remove the offending padlocks and deter locker-use abuse.

The Key to Success
Once the type of alternative lockers and their placement have been determined, operational issues come into play. For example, should facilities charge a locker fee via coin-operated units or key rentals, as many of them already do for traditionally located lockers?

The answer depends on a given institution's philosophy. With many college and university administrators viewing the campus recreation center as a vital component of college life, some tend to consider extraneous fees an unnecessary burden - and even a detriment - to patrons. Others try to tap into as many revenue opportunities as possible.

In that case, reserving a few banks of lobby- or corridor-located lockers specifically for extended rental use on a weekly, monthly, quarterly or semester basis can generate considerably more revenue than coin-operated lockers ever would and, again, encourage increased facility usage. Building operators often apply those rental fees to offset some of the costs associated with installing lockers in new locations.

Keep in mind that the average cost of alternative lockers is not based on the lockers' location, but rather on the materials used to construct them. Tiered lockers, say, will typically carry a higher price tag than full or half lockers, because they use more materials and require more labor to build.

In a business that becomes more of a service industry with each passing year - the more opportunities a recreation center provides for its users, the greater the likelihood they'll remain loyal patrons - facility operators should consider the installation of accessible and safe locker alternatives. Giving people choices also gives them reasons to keep coming back.