New technologies can help maximize laundry efficiency by eliminating the human element from the drying process. 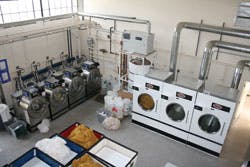 Photo of a facility laundry room

In laundry, it's almost human nature to over-dry. "People don't go into the process saying they want to over-dry, but they do want to make sure that the load is dry," explains Tony Regan, senior vice president of global sales and marketing for American Dryer Corp. "Rather than risking coming back to a load, having to start over again or add more time, they'll always err on the side of more drying versus less. And that costs money."

Lots of it. Consider the going prices of natural gas and electricity, and the sheer volume of towels that are soiled on a daily basis at fitness and athletics facilities. Now consider the fact that, by itself, drying can account for as much as 70 percent of the energy consumption in a laundry. The pocket change that facility operators are losing every time a dryer works overtime adds up fast - to potentially thousands of dollars per year.

Manufacturers realize that, and efficiency is often at the center of their sales pitches. "Everybody is seeking the best possible efficiency to reduce operating costs," says Kim Shady, national sales manager of the UniMac brand of laundry equipment. "We as manufacturers are continually striving to improve designs to meet that need."

Auto-dry options, programmed lint-removal features, and even proper laundry room design all have helped remove the human element from drying, making the process both more efficient and safe. Potentially, that is, as operators of laundries still introduce some human variables. "A lot of laundry operators are still using time-dry features," says Steve Hietpas, national sales manager for Maytag Commercial Laundry. "They're not taking the time to find out how long they actually need to dry the towels or garments to have just a hint of moisture. If the clothes or towels dry in 35 minutes, people get used to that and they go to 45 or 50 minutes on those old manual time dryers just to make sure. That slows down the whole laundry process, as well as over-dries."

The biggest change in drying tumblers in the past decade has actually been occurring one machine over, in the washer/extractor. "The right washer/extractor can reduce dry time by 30 or 40 percent," says Joel Jorgensen, vice president of sales and customer services for Continental-Girbau. "As far as the engineering of the dryer itself, no technology that exists today even closely approaches that percentage." High-speed extraction - a standard feature on virtually all major manufacturers' washing units, to various degrees - translates to less dry time than with older models. "Drying has changed since even 10 or 15 years ago," says Hietpas. "In a health club or fitness center, where you'll see a lot of terry goods, it was not uncommon to see a 25-, 30- or 35-pound washer paired up with a 75-pound dryer, rather than a 50-pound dryer. You needed that extra oomph because the goods were coming out of the washer so wet."

More recently, dryers featuring axial airflow have become viable options for laundries such as those found in fitness and athletics facilities. In such smaller commercial and industrial laundry applications, axial airflow is considered more energy-efficient than radial airflow; specifically, loads can be dried in the same amount of time but with less energy. 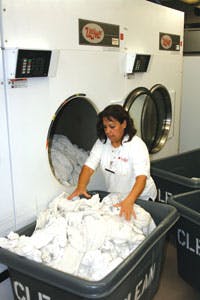 Dryers have traditionally utilized a radial airflow pattern, in which the entire cylinder is heated and garments, towels and linens tumble through the heated air. It's been an effective drying method for decades, but as Regan explains, "with radial, a lot of that hot air will go straight out the stack without actually passing through the load."

With axial airflow, a concentrated stream of air moves from the back of the unit to the front, acting "like a laser," as one manufacturer describes it, with properly tumbled towels and garments absorbing more of the heat energy. As long as a proper balance of that energy can be maintained throughout the rest of the cylinder, then axial airflow is indeed most efficient. However, axial airflow configurations become less desirable as load capacities increase, in part because larger loads make that stream of air insufficient in spanning the diameter of the cylinder, increasing the time required to remove moisture. "When you're dealing with something like a 120-pound dryer or a 170-pound dryer, the manufacturers have found that radial airflow is still the way to go," says Hietpas. "It's really about what option is going to maximize your efficiency."

Auto-dry features - which have become fairly standard on most commercial- and industrial-level dryers - have also helped to improve efficiency, allowing essentially push-button solutions to replace human decision-making related to dry times. In many machines, microprocessors will determine how much time is required to dry a given load considering its size and the temperature within the cylinder. At least one manufacturer now offers a commercial/industrial dryer line that has a sensor that actually detects moisture in items within the load. And with most machines, auto-dry features can be followed by an anti-wrinkle feature, which involves tumbling the towels or garments at a specified time interval, preventing wrinkles and, more important, reducing the potential for spontaneous combustion, the most common cause of laundry fires.

Though these technologies have been utilized in drying for some time, Jorgensen likens auto-dry and other automated features to other user-friendly technologies. "These have been around for 10 or 12 years, but cruise control or broadcasting technology has been around, too," he says. "These things are all being constantly enhanced and enriched in form, function and accuracy."

Terry Satchwell, vice president of strategic accounts for Pellerin Milnor Corporation, notes that even some auto-dry settings may be slightly missing the mark when it comes to dry times. "There is no need to dry towels or linens to a bone-dry condition," he says. "Once they are taken out of the dryer, they will absorb the moisture in the air based on the relative humidity of the location of the laundry. If you were to bone-dry a load of terry towels in Houston or South Florida or any other relatively high-humidity area, there would be a wet pickup rate of approximately 5 to 7 percent moisture in those towels. You'd be wasting energy and time."

Over-drying is particularly costly in health club and other fitness facility settings because of the replacement costs for terry towels. Though linting - the degradation of the towel - actually begins in the wash/extraction process, in which high G-forces are at work, it is finished in the dryer, where the pieces of the towel begin to separate. Naturally, the longer the towel is being dried, the more linting will occur. "By not over-drying, you are extending the life of that material," explains Regan.

Another strategy that can eliminate inefficiency in drying is to have a one-to-one ratio of dryers to washers. Though this may not be a viable option in facilities in which laundries have been pieced together over the years as older machines are put to rest - causing load-capacity variations that don't provide for a proper one-to-one ratio - Jorgensen, for one, reminds facility operators of the relationship of washing to drying. "What you wash, you must also dry; one does not go without the other," he says. "Typically, the way we size any laundry is to have at least two washers and two corresponding dryers to handle the given size load in the desired amount of time." 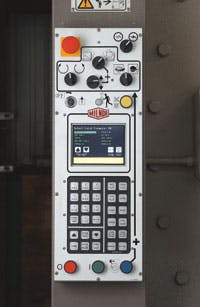 The benefits of this arrangement are twofold. First, if there is a maintenance issue in one machine, a laundry can still operate at 50 percent capacity. Second, it reduces the possibility of human error. "This eliminates the splitting of loads at the discretion of the laundry operator," says Satchwell. "They may try to put one half of the load, for example, in one dryer and the other half in another. Of course, that load variance directly impacts the dry time and creates a tendency to over-dry or under-dry."

The design of a laundry room can affect energy efficiency as much as the performance of the drying tumblers themselves. Unfortunately, poor room design is also a result of human error, usually that of an architect or general contractor who may not fully understand the utilities and venting requirements of today's commercial and industrial equipment. For the dryer, those requirements include ample combustion air, proper ventilation for exhaust air, and ample power, usually in the form of gas (washers and extractors, naturally, have their own utilities requirements including water and power, often requiring three-phase power).

"Sometimes you'll see no consideration for the type and volume of utilities that are required for larger-capacity commercial and industrial washers and dryers," says Jorgensen. "You'll see a laundry room designed right in the middle of the facility. There will be humid vent air that has to go somewhere and nowhere to put it."

As Milnor's Satchwell explains, "proper louver size for fresh air entering the room must be equal to the total amount exhausted in cubic feet per minute from all the dryers." As for that exhaust, Satchwell continues, "ductwork that exceeds 20 or 30 feet in length or with more than two or three 90-degree elbows needs to have the assistance of an inline booster fan to overcome the resistance - or back pressure - from the ductwork design."

While accommodating such complicated venting is costly enough at the outset of a building project, renovating a room that's already been built is exponentially more so. "Sometimes the venting and the mechanical devices used to handle the air cost more than the laundry equipment itself," says Jorgensen. Poor venting can also lead to excessive buildup of lint that has managed to escape the lint filter. "Say the venting runs 45 feet, but because there hasn't been adequate maintenance and the vent pipe is caked with lint, it may only be running at 30 percent capacity," says Jorgensen.

That is why manufacturers suggest that facility owners, architects and others involved in a facility's preliminary designs should be sure to include experienced laundry professionals in the design of the laundry room. "We can look at your plans and say, 'You are exceeding the run limitations of this dryer' or 'I see no ability to supply the necessary airflow for combustion to that dryer,' " says Jorgensen, adding that the service is typically free of charge. "Any number of manufacturers or distributors can lend you their expertise, so consult with them early on a project."