The success of any athletics laundry operation often depends on an outside party - the chemical supplier. 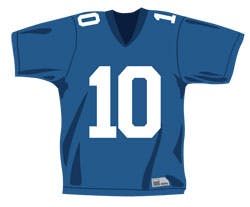 Graphic of a football jersey

After equipment managers at Oklahoma State University took the time to repeatedly prewash a new set of uniforms to prevent the orange and black dyes from bleeding, they were discouraged to later find that the white portions of the uniforms had indeed turned pink. To root out the problem, they called their chemical supplier, who then determined the culprit - dye from heat-pressed numbers that were applied after the prewashing.

That kind of troubleshooting tends to be a big part of the job of any supplier of detergents and other laundry chemicals to a large athletics organization, where an investment in a single team's uniforms can cost $20,000 or more. It is that supplier who is often put in charge of protecting the look, feel and durability of those costly garments.

"We can give you the opportunity to program time, temperatures or a very finite water level, but the laundry is only as good as the third party that does the programming," says Kim Shady, national sales manager of the UniMac brand of laundry equipment, referring to the role of chemical suppliers. "They are the ones that know their chemical products, and they are the ones who are going to be in charge of that."

Aside from regularly scheduled visits that involve stocking laundry chemicals and inspecting the pumps that interface with washing machines to inject those chemicals, the chemical supplier is most often the party called in emergency situations, when washes lead to color changes or stains aren't removed. "We're there to support the laundry managers or equipment managers with all kinds of issues," says John Brick, director of athletic sales for U.N.X. Incorporated, a laundry chemical company with a roster of clients that includes various professional and collegiate sports organizations. "There's not a week that goes by in which I don't get a call about a new stain."

Chemical action is widely regarded as one of the four major components of the wash process. The others are time, water/water temperature and mechanical action. "You cannot properly wash, disinfect or remove stains without the right combination of those four," says Joel Jorgensen, vice president of sales and customer services for the Continental Girbau brand of laundry equipment. "Each of them are interdependent, and they are determined by the conditions and limitations of an installation. You may be limited in one factor, but that means something else will be affected. If you don't have the proper temperature, then you'll need to make it up with more chemicals or with more mechanical action."

Thus, from the perspective of the chemical supplier - or laundry "programmer," to borrow Shady's term - formulating the correct chemistry for any laundry begins with having the correct washing equipment. "What a washer/extractor does, depending on the capability, is provide the mechanical action, time variable and thermal variable for the chemical supplier to create the conditions that are going to remove whatever soil or stain and/or disinfect to whatever level," says Jorgensen. "We basically provide the atmospheric performance they need in order for them to do their job in a reasonable amount of time."

For the chemical supplier, the key is being able to program those variables. Many machines still in use have few options for programming time, water levels or water temperatures (although water temperature is limited by the facility itself, not by the washing equipment). But browse the catalogs of most major laundry machine brands, and you'll find plenty of products that offer wide ranges of programmability on all those fronts.

"What you really want in an athletics laundry is a fully programmable washer," says Brick. "If you buy a nonprogrammable washer, what you're going to do is a three-minute rinse on a heavy-duty cycle, the wash process is going to be eight to 12 minutes max, and then you'll have your three rinses and you return the alkalinity to neutral and that's it. That may be okay for basketball or volleyball, but it's not going to be enough for baseball or football. Those uniforms need more time in the wash process to break down those grass protein stains."

Brick urges those in charge of purchasing laundry equipment to consider the fact that the long-term costs of heat and water usage (which can increase exponentially if washers are too small and more loads are required), as well as the replacement of uniforms due to material degradation or color change, can exponentially exceed the up-front investment in properly sized and programmable laundry machines.

"The clients are on a budget, and they might say, 'I have $5,000. What can I buy?' " says Brick. "You can get something that might get the job done in the very short term, but your expensive new uniforms aren't going to last very long."

Shady says that many people responsible for purchasing laundry equipment at new athletics and fitness facilities wait too long, to a point at which their budgets are too constrained to make the best decision for their laundry operation. "For most people, laundry is a necessary evil and they don't want anything to do with it - their job is getting people into their facility," Shady says. "But would you rather pay $3,000 more in price, or would you rather pay $2,000 in additional operating costs every year you own that machine? Unfortunately, many people make their decisions based on their fear of the $3,000."

Even in those cases, the chemical supplier is the party left trying to salvage the laundry operation. Says Jorgensen, "If a machine has a very dated and archaic control system and the client wants low-cost chemicals, the chemical rep might come in and say, 'Based on the load and soil conditions you're asking me to tackle, along with this low temperature, this hard-water condition and this machine, I can't guarantee I can do what you're asking.'"

In athletics applications, the laundry operation is most taxed on game days, when more chemical action and more mechanical action are required to clean and disinfect garments.

"You're dealing with facemask paint, grass stains, sweat, blood and field paint," says Brick, referring to a typical football laundry. "I'll do a 20-minute digest with a couple different chemicals - one to eat proteins and one to go after paint. The wash process for that can be anything from 15 to 30 minutes. Then I need to dump the water in the machine so everything goes down the drain, and then it's time to wash with my regular chemicals - my detergent, my alkali and my oxygen bleach. I'll do that wash for another 20 minutes, but now I've got a lot of chemicals in there, so I might do some high-level rinses. Then I'll sour it back down in my final rinse to bring the alkalinity back down to neutral."

Brick adds that most laundry operators these days will want to add a disinfectant to the final rinse to provide a residue that will prevent the spread of infections such as staph. What all of this requires, says Brick, is maximum programmability of the washing unit and the willingness of the client to invest in the chemicals required to keep garments looking fresher for longer.

"What you will see - especially at a lot of high schools and small colleges - is someone spending $20,000 on a new set of uniforms and then sending someone out to Wal-Mart or Sam's Club to buy a 40-pound container of detergent for $20," Brick says. "What they're really buying is a bunch of salt; it's a filler. Buying a cheap detergent will always affect the clean-quality of your garments. Your uniforms, which used to be white, will start graying on you. It's so gradual you may not notice it, but by the end of the season, you may look at your jerseys and realize you have to buy another set."