There are few components in any recreation center, aquatics center or health club that nearly every facility user is guaranteed to touch on nearly every visit. One of those components is the locker door lock. And unlike major program spaces or available exercise equipment, locks are unlikely to be one of the amenities that initially draws patrons to a given facility. 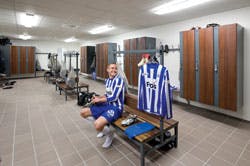 There are few components in any recreation center, aquatics center or health club that nearly every facility user is guaranteed to touch on nearly every visit. One of those components is the locker door lock. And unlike major program spaces or available exercise equipment, locks are unlikely to be one of the amenities that initially draws patrons to a given facility. But over time and upon repeat visits, they can prove to be a key element of a facility user's overall experience.

"Many times, the lock choice is actually made by the locker supplier. They have a tremendous influence on what type of lock will be used, and the facility owners sometimes don't pay enough attention," says John O'Meara, strategic business development manager for HÃ¤fele America Co., a distributor of a wide range of locking solutions. "Locker and lock choice is almost always thought of as an architectural question, but it should also be an operational and security question."

In most health club and recreation center applications - where, for example, 200 lockers may need to accommodate 2,000 members - facility owners opt for what are referred to as day-use or shared-use locking solutions. "Basically, any type of health and fitness facility that has a locker room benefits from the shared-use solution, because it reduces the number of lockers you need," says Julie Advocate, chief financial officer for Digilock. "You don't need to take up as much real estate."

Historically, one of the most common shared-use solutions has been to require users to provide their own padlocks, either combination locks or key locks. Doing so makes locker room management easy, although a dependable bolt-cutter will be required to remove locks that have overstayed their welcome on a given locker. The other, more significant drawback to such a strategy is that it puts a burden on dues-paying patrons to remember to lug around a lock.

"You could have a situation where someone is paying as much as $100,000 for a lifetime membership to a golf club," says Mark Eu, marketing manager for locker manufacturer Salsbury Industries. "When people are spending that kind of money, asking them to carry around their own lock is not desirable."

In addition, many locker room operators may not want their locker doors dotted with a hodgepodge of locks. Says Eu, "When people are paying $30, $40 or $50 a month for a membership, they come to expect a higher-end environment." 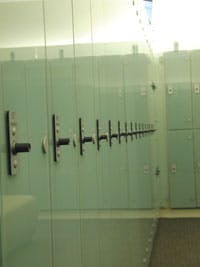 Key-locking solutions built into locker doors can be incorporated for day use, but they entail additional operational requirements. While such options remain affordable, keys need to be issued, either in person or through coin- or card-activated systems. Coin-operated lockers can provide a revenue stream or at least serve as a deposit system for day use, and card-operated lockers can work in conjunction with a magnetic-striped membership card.

However, both solutions typically still require the mechanical action of a key. (When the user deposits the coin or coins, for example, the key is released and the locker is unlocked. When the key is returned, the locker can be opened once more.) The drawback is that, invariably, keys get lost or stolen, meaning locker room managers will need to call on help from master keys, and stocking keys will be an ongoing issue.

"Any time mechanical keys are involved you can run into problems," says O'Meara. "When somebody walks off with a key, you either have a non-functioning component of your facility, or you have to replace the cores. You need extra stock; you have to order the parts."

To avoid such hassles, many locker room operators have turned to day-use digital keypad solutions, which essentially work like personal safes in hotel rooms. Each successive user enters a personal identification number of his or her choosing. Says Advocate, "Instead of the member having to bring a lock or a key, or having someone at the front desk worrying about handing out keys or combinations to locks, the member is able to go straight to any available locker in the room and enter a personal code."

Digital keypad locks tend to be battery operated, although hard-wired solutions are available. While virtually everyone in the locker industry seems in agreement that digital keypad locks represent an easy-to-manage, aesthetically appealing and secure solution, it is also clear that they come with a higher up-front cost. Advocate, however, contends that such locks represent good value in the long run, especially when utilized for shared use.

"Considering the cost of the management time spent in the locker room, compared to a solution where you have to manage codes or keys, it can pay for itself in five years," says Advocate, adding that she's seeing an increasing number of people specifying keypad solutions for college and university athletics locker rooms. "That can be a show-and-tell marketplace," Advocate says. "People are trying to one-up each other. They want the luxurious looks of a high-end facility, right down to the locks."

Though innovations in the world of locks may be few and far between, radio frequency identification technology has been making its way into the locking industry, and O'Meara contends RFID is increasingly sought by high-end clubs. The technology - which first appeared in commercial applications to track and monitor livestock, and which has since gained widespread recognition through highway toll passes and store security systems - is relatively simple. Every RFID tag has a unique identification number (UID), a chip to store data and an antenna to pick up the radio frequency. 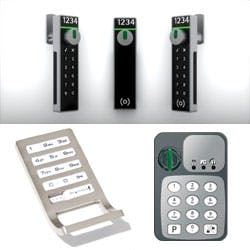 In locker applications, RFID can be used in numerous ways, including for shared-use solutions. Users can swipe their RFID tags - often in the form of cards, wristbands or key tags - past the scanner, which recognizes the UID and permits access to an unoccupied locker. Another swipe of the RFID tag unlocks the locker, and then it is re-locked to await another user.

But RFID technology is beginning to open new doors in the locking industry. The RFID chip can be configured to hold any number of data that can likewise be integrated with other popular software found throughout fitness, recreation and athletics environments. For example, if designed properly, the same RFID tag that can give a health club member locker access can be tied into the club's member-management software or, say, concessions points of sale. The RFID technology, then, not only allows access to amenities such as lockers, it can prevent access, too, based on a user's membership status.

But RFID technology is beginning to open new doors in the locking industry. The RFID chip can be configured to hold any number of data that can likewise be integrated with other popular software found throughout fitness, recreation and athletics environments. For example, if designed properly, the same RFID tag that can give a health club member locker access can be tied into the club's member-management software or, say, concessions points of sale. The RFID technology, then, not only allows access to amenities such as lockers, it can prevent access, too, based on a user's membership status.

O'Meara says RFID lockers can be found throughout European markets, but that they have been slower to catch on in the North American market, in part because the first generations of RFID lockers introduced were low-frequency, which caused frustration and mechanical problems as users would try to operate the locker before the signal could be received to unlock the lock. O'Meara says high-frequency RFID locks now rarely, if ever, malfunction because the data transfers "almost instantaneously."

O'Meara also acknowledges that RFID solutions can cost as much as or more than lockers themselves, and facility owners can struggle to justify the added expense. For that reason, he urges people interested in RFID to seek out integrated software solutions. Says O'Meara, "The idea that there is some value added is important with RFID."

Though specifying an ideal solution from the outset of a given project should be a goal, finding just the right locks and locker types can occasionally be a process of trial and error. Manufacturers will often get calls from locker room managers who are spending too much time managing and maintaining the locks themselves.

Because most lockers conform to standard sizes, to which lock manufacturers have come to adapt, retrofitting locks to existing doors can be a fairly hassle-free process. Says Advocate, "You see that a lot in the health and fitness realm."

But facility operators may simply want to reinvigorate an existing locker room, and replacing entire locker systems or just the doors presents a good opportunity to review the performance and aesthetic appeal of the locks themselves. "Oftentimes, you'll see people replacing locker doors, just to freshen up a room," says O'Meara. "What a lock looks like is also part of the selection process. We have won many jobs because of the ugliness of other solutions, and we've been the victim of that, too. It's a subjective thing."