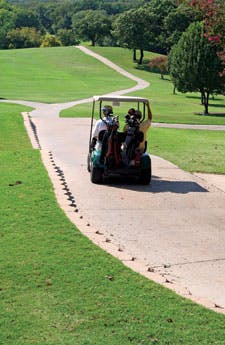 Last November, the City of Duluth, Minn., hired a consultant from National Golf Foundation Consulting Inc. to evaluate its two 27-hole municipal golf courses and suggest improvements. The report recommended tearing down and rebuilding the clubhouse at Enger Park, replacing the irrigation system and adding on-course restrooms and other miscellaneous improvements. The final cost would be about $4.3 million, with an additional $2.9 million in repairs recommended for Lester Park.

"We've known that we've needed to make improvements for years, it's just a matter of how we would finance them," says Kathy Bergen, manager of the city's parks and recreation division. "We were thinking it might be better if we closed nine holes at one of the courses, reduced maintenance and balanced budgets, concentrating on the remaining parts."

Rather than closing any holes, the consultant suggested that the right improvements could turn Enger Park into a tourist attraction. Even so, the decision won't be taken lightly by the city, which will be paying off the remaining debt this year on the previous round of improvements made to the courses 20 years ago. "There are several things we'd have to do differently that have always been in the back of our mind," says Bergen. "What we've decided to do is develop a master plan so that we know exactly what changes are needed and how much they will cost at both courses and then decide which ones we would prioritize and implement. Right now, we're just in the process of obtaining proposals."

For Duluth, the upgrades offer an opportunity to increase use of its municipal courses and draw more tourism, but not all municipal courses are faring so well. There's no doubt that the golf industry as a whole is suffering, with economic and geographic factors making some courses feel the impact more than others. The cost to maintain a municipal golf course is rising, and as many cities and parks departments feel the strain of tighter budgets, everyday expenses represent enough of a burden, let alone the improvements needed to be competitive. "Municipalities are having to make decisions," says Jeff Bollig, senior director of marketing and communications at the Golf Course Superintendents Association of America, who estimates that 2011 saw a net loss of 107 golf courses in the United States. "Do we operate this course at a loss and understand that it is a service we provide, do we break even, or do we try to make money that returns to the general fund?"

Faced with a projected deficit of $850,000 at three of its four municipal courses with an additional $4.7 million already owed to the city's risk management fund, the City of Sacramento, Calif., knew something had to be changed simply to stay in business.

Depending on how a golf program is funded, any operating deficit could be added on to an existing debt service, or it could affect other programs. Such was the concern of Barbara Bonebrake, head of Sacramento's Convention, Culture and Leisure Department, and the motivation behind the city's decision to privatize operations at three golf courses. "The debt would have taken services away from something else because it wasn't budgeted," says Bonebrake. "We're pleased that we're not having additional impact to our parks or police."

The move to private operation was a quiet one for Sacramento's courses, which were already using a private company, Morton Golf, to oversee many of their services. "The new portion is the maintenance," says Bonebrake. "The starter services were included in the privatization about 10 years ago. They were able to be handled by people who were already onsite, so it was really more efficient and offered better service levels."

Many municipal courses already contract out some services, creating a public/private hybrid. Few parks and recreation departments have the same level of expertise in golf course management and marketing that a private company offers, nor can they take advantage of economies of scale achieved when supplies are purchased in bulk. Private companies often also benefit from fewer of the spending constraints a municipal department faces. "Because of the nature of municipalities, improvements go through a lot of checks and balances," says Bollig. "You have to go through golf committees, parks and rec departments, city commissions. The process is a challenge."

Of course, the omnipresent challenge is funding. Many cities are finding themselves at a crossroads, where they must decide whether to invest precious funds into a municipal course and hope for a payoff, or cut their losses and pursue other options. "Unfortunately, because of our financial situation, we haven't been putting money back into the courses for about 10 years," admits Bonebrake, who is looking forward to the improvements that Morton Golf will make.

Even with improvements in management and course quality, a golf program can't be profitable if there isn't enough demand. The golf industry, according to Bollig, is seeing a three percent annual decline in participation, a trend that began with the course-development boom of the late 1990s. Cities like Palo Alto, southwest of Sacramento, are keeping that in mind as they consider whether to invest millions of dollars in renovations. Usage of Palo Alto's course has declined in recent years, and while some city council members feel that a renovation would spur demand, others wonder whether a better investment would be to reduce the course to 12 holes and convert the extra land into athletic fields. The city council in Ft. Worth, Texas, is in a similar situation this month as it considers whether to close Z Boaz Golf Course, turning the land into a park or, possibly, an aquatic center.

Though the economy bears the brunt of the blame for public golf's woes, some in the industry speculate that a strengthened economy won't be enough to pull the game out of its slump. It's not just money keeping players away, Bollig notes. "You may love golf and find it very pleasing, but at the same time, you don't have five hours to play. What we're seeing not only with new golf courses but existing courses, is how operators work to create a less-than-18-hole experience. There's a lot of discussion in the industry about creating alternative playing setups."

There's also a lot of discussion about adding other services to make golf courses more appealing to a broader range of users. The image of golf as the sport of businessmen is quickly dying, replaced by youth teams and programs aimed at couples and families, and operators are making the adjustments needed to accommodate everyone. "People are looking at combinations of services," says Bollig. "I know people who have added fitness facilities and daycare. Golf operators are trying to be inventive in adding different ways to service different clientele. They're looking at any means to increase participation."