A Minor League Baseball team that was earmarked for elimination has instead built a brand new 3,500-seat stadium in Beloit, Wis.

The highly anticipated public unveiling of Beloit’s new $37 million ballpark and community center, ABC Supply Stadium, nestled along the banks of the Rock River in downtown Beloit, marked a new era for the Snappers and the city.

The privately funded, 3,500-person multi-use facility will offer baseball fans and local citizens a state-of-the-art events venue downtown alongside the Rock River for baseball games and community events throughout the year.

A beautiful place to watch a game. Plus, it features the largest bar in Wisconsin!

The new stadium includes amenities such as a 360-degree walk-able concourse, two party decks, a 40-inch by 40-inch high-definition video board, a grass berm and a downtown centerfield entrance to the stadium. There is also an indoor suite-level ballroom and artificial turf. There are 86 beer taps throughout the stadium, 20+ concessions locations, a retail team store and a Kids Zone play area.

The stadium will host youth sports, concerts, and other community events year-round, helping catalyze the continued growth of downtown Beloit.

Just 13 months ago, when the construction of the stadium began, the future of the Snappers seemed bleak. The team was among 40 Minor League franchises set to be eliminated as Major League Baseball reconfigured the MLB/MiLB system.

Instead, thanks to the contributions of Diane Hendricks, new team owner Quint Studer and many others in the community, the city of Beloit now features one of the country’s finest Minor League facilities and the town has gained a year-round community event center in the ballpark. – Minor League Baseball

The City of Norman, Okla., recently held a groundbreaking for the Young Family Athletic Center, named after the family of former Oklahoma and current NBA guard Trae Young.

The center is part of the Norman Forward Quality of Life Projects, a special sales tax initiative passed by voters in 2015. The 122,000-square-foot building has an estimated cost of $36 million, and includes two 25-meter pools, eight basketball and 12 volleyball courts. It received a $4 million donation toward construction cost on June 11 last year from Young and his family.

The Trae Young Family Foundation — created in 2019 — helps “inspire and create a positive impact for children and adults from all walks of life who suffer from mental health problems,” according to its website.

Young spoke to the crowd in the city’s University North Park outside the Embassy Suites near the eventual location, which is expected to be complete in 2023. The city broke ground 18 days after Young and the Atlanta Hawks fell in Game 6 of the Eastern Conference Finals to the Milwaukee Bucks, the eventual NBA Finals champions.

The city will also hold tournaments at the facility, which will benefit the city’s economy, but also create an avenue for college coaches to evaluate local talent as they compete for scholarships. – OUdaily.com 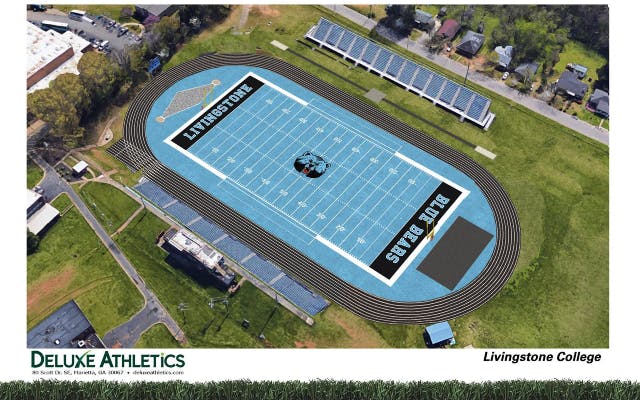 The 6,000-seat stadium will undergo a full remodel of the track and field, which includes the high jump apron, thrower's circle, and track runways.

The stadium project will also feature a video scoreboard added to the southeast corner, and the grass turf will be converted to artificial turf that is dyed Livingstone blue.

Livingstone's partnership with Field Turf, Deluxe Athletics, and Formetco Sports, through the project, has positioned the athletic department to provide a world-class facility and a competitive edge in recruitment efforts to attract elite student-athletes.

A video scoreboard will provide the opportunity to cultivate partnerships with new and current sponsors and ensure an enriching fan experience.

Livingstone Athletics will temporarily relocate home games and practices until the full completion of the project. However, project leaders did not share an anticipated completion date for the renovations. – BlueBearAthletics.com

Woah! Blue Bears Livingstone1879 stepping up the game with a major makeover of the stadium. hbcu https://t.co/JshoKKAMiD