Facility Managers Clamp Down on Fan Movement During the National Anthem 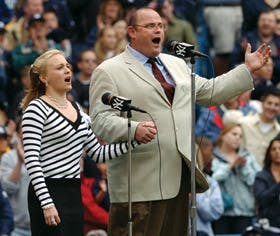 Joe Waters respects his country more than he does concessions sales. The fulltime truck mechanic, who also worked a pizza stand inside the Cumberland County Crown Center in Fayetteville, N.C., proved that in April when he walked off the arena job in protest after being told by management that he couldn't pause from his duties behind the counter during the playing of the national anthem. Soon after, Spinners Pizza & Subs followed suit, announcing that it was ending its relationship with the Crown Center, which hosts minor league hockey and arena football, among other non-sporting events.

Rick Reno, the arena's chief operating officer, told television station WRAL in Raleigh that the expectation of uninterrupted sales applied only to concessions stands located in the arena's concourses. Hawkers in the seating bowl, by contrast, were not allowed to sell food items during "The Star-Spangled Banner." The double standard didn't sit well with Waters, especially considering that Fayetteville is home to the largest U.S. military installation in the world. "We have had people who have died in harm's way, right now - in this town, Fayetteville, Fort Bragg, friends and neighbors," Waters told the station.

Response to WRAL's report was overwhelmingly supportive of Waters' patriotism. "I wish I had been there to stand with you," wrote one individual on the station's web site. "Respect for the flag and the national anthem is always the appropriate action." Another responder pointed out that lines are halted at the Crown Center's turnstiles during the anthem, so why not at concessions stands? A third noted that at Five County Stadium in Zebulon, N.C., home of the Class AA Carolina Mudcats, both concessions and ticket sales cease during the anthem. But others countered that at U.S. military bases, where the anthem is played prior to the screening of movies, theater lobby concessions sales continue unabated. A former service member and current military spouse went so far as to add, "If we force people to demonstrate patriotism, isn't that just as unpatriotic, since we are denying others the freedoms that they are entitled to as Americans?"

A similar debate has played out at New York's Yankee Stadium, where fans have complained of disrespect for the pregame playing of the national anthem and the singing of "God Bless America" before the bottom of the seventh inning. (Major League Baseball requires teams to feature the latter song only on Sundays and holidays, while the Yankees have incorporated it into every home game since 9/11, according to The New York Times.) In response to the complaints, Yankees owner George Steinbrenner instructed security to curtail fan movement during both songs by blocking stadium aisles with chains. While the Yankees are the only team to use chains, the Times found that eight other MLB clubs restrict fan movement during the songs. "We need to be wary of enforced cultural conformity and the use of a ballgame to impose political correctness on a captive audience," Arthur Eisenberg, legal director of the New York Civil Liberties Union, told the paper. However, Columbia University constitutional law professor Michael Dorf countered, "The Yankees are not the government. If they were a municipally owned team, you could have an issue, because the team would be a state actor."

Back in Fayetteville, Crown Center management ultimately called for patron patience, announcing in May that concessions sales in all arena locations would be suspended for the two minutes it takes to play the anthem. "Anytime you are able to demonstrate flexibility," Reno told the Fayetteville Observer, "I believe that is a good thing."