Persistence Pays When Trying to Rid Ballparks of Birds

Persistence pays when trying to rid ballparks of avian invasions. 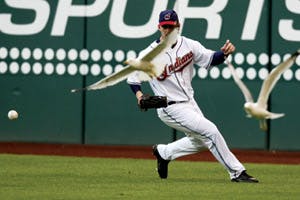 During several Detroit Tigers home games earlier this season, the scene at Comerica Park conjured up Hitchcockian images of Tippi Hedren and Rod Taylor fighting for their lives amid swarms of bloodthirsty birds. As many as 60 herring gulls descended on the field during the peak of their five-day infestation, distracting players and fans alike. Thankfully for the Tigers and their visitors, the birds weren't after human flesh. They were feasting on recently hatched army moths that were drawn to the stadium lights. And when the moths left, so too did the gulls - most of them, anyway.

"When you have a large open-air facility, you're going to have birds that you've got to deal with from time to time, especially with all the food and debris," says Rob Matwick, Tigers vice president of communications. "As long as there's any food source, they're going to be pretty persistent."

Comerica Park's proximity to the Detroit River and several other large bodies of fresh water makes it a particularly popular destination for hungry gulls. Elsewhere around the country, a trio of pesky bird species - starlings, sparrows and pigeons - haunt stadium operators by roosting in the rafters, or wherever else the birds can find an abundant supply of food and protection from the elements and natural predators. And unlike the moth-hungry gulls in Detroit, sparrows, starlings and pigeons generally stay awhile.

"The longer birds entrench themselves, the more stubborn they become," says Mona Zemsky, marketing manager for Bird-X, a Chicago-based company specializing in a wide range of bird control products. "Stadiums have shelter, safety and food - everything that birds love."

While most professional bird control technicians take care not to harm pest birds, Zemsky says many of Bird-X's clients have come to the company frustrated to the point of violence. "Some of our customers joke about using BB guns," she says. "A lot of people say, 'Let's just kill the birds.' " That strategy isn't new. According to Boston Red Sox lore, Ted Williams would bone up for hunting season by bringing his shotgun to Fenway Park and picking off pigeons. Zemsky argues that this type of pest control - done in accordance with all applicable laws, of course - will only exacerbate a bird problem. "Whether or not you agree with that tactic, it's not solving the problem, it's just treating the symptom," she says. "You're not making the stadium undesirable to birds. You're just making the space more open for other birds to fill the void." Zemsky says annoying pest birds into decampment requires perseverance and a zero-tolerance policy from stadium operators.

Cincinnati Reds vice president of ballpark operations Declan Mullin says he and his staff tried "everything" to chase pigeons and starlings from the club's Great American Ball Park, which opened in 2003. The problem was particularly noticeable at the stadium because most of its steel supports are painted white. "We were just getting bombarded with droppings," says Mullin.

The club's bird problem began after Cincinnati and Hamilton County officials waged war on pigeons roosting in highway structures just outside the stadium. The local government won its battle but, in doing so, drove the birds next door to the steel supports of the ballpark's highest seating level. Mullin and his staff tried using fake owls and wrapping the steel beams in textured metal. However, nothing was as effective as special fine-mesh netting the team installed to keep the birds from their favorite roosting spots.

"Our contacts with the zoo here in Cincinnati were continually telling us we had to disrupt the birds' roosting patterns, and then they would leave for good," Mullin says. "Not allowing them a place to land solved our problem." But it wasn't quite that easy. Mullin describes a "domino effect," whereby the club would install more netting, and the stubborn birds would find other spots in the stadium to call home. "You've got to totally interrupt their roosting pattern, or else you're just going to move them from section to section," Mullin says.

There have been some isolated, though infamous, cases of birds disrupting on-field action, including when Dave Winfield killed a seagull while warming up in Toronto in 1983 and when a fastball delivered by Randy Johnson in a 2001 spring training game obliterated a low-flying pigeon. But for the most part, stadium operators are most concerned not with the birds themselves, but with what they leave behind.

Mullin said his staff would have to steam-clean the Great American Ball Park concourses and power-wash its white beams on an near-daily basis. He also says there was constant monitoring to make sure pigeon droppings weren't infiltrating stadium concession areas, potentially leading the club to violate safety codes or causing fans to get sick. Matwick, who ran Houston's Minute Maid Park for six years before moving on to Detroit, says he would have to send staff around to seating areas to wipe away bird droppings before every game. "Occasionally, you would have a bird that had roosted above a seating area and would drop during games," Matwick says. "That would be the biggest issue."

Matwick, who says lingering pest birds are fairly rare at Comerica Park, hopes the gulls' departure means the Tigers organization can wash its collective hands of bird-related issues. "It was a challenge, but hopefully it's one we won't have to deal with anymore," he says. "Time will tell."