It's hard to imagine a worse week for a one-year-old sports venue. Sure, there have been other stadiums and arenas with pyrotechnic setbacks or infestation issues, but Lucas Oil Stadium in Indianapolis had to confront both fire and mice within a seven-day span. 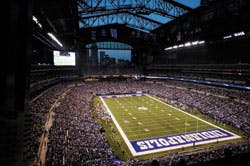 DIRTY 'OIL'Rodent droppings and pyrotechnics fallout have sullied the home of the Indianapolis Colts.On Tuesday, Nov. 10, local NBC affiliate WTHR aired a two-part report of its months-long investigation into food safety violations at the stadium. Critical violations - the kind considered a threat to public health - included the discovery of mouse droppings in storage and food-preparation areas. Droppings were even found inside an oven. Marion County Health Department food safety inspectors also witnessed dead mice, as well as live mice scurrying through a loge-level kitchen

WTHR's Bob Segall reported that more than 1,400 violations, including 500-plus critical violations, had been documented since the stadium opened as home to the Indianapolis Colts in August 2008. (Food temperature and employee hand-washing violations also contributed to these totals.) As of late November, 42 citations for repeat violations (or nearly a third of those meted out to all restaurants in the entire county) and nearly $4,000 in fines had been issued against the stadium's food service provider, Centerplate.

Segall's "13 Investigates" team returned to Lucas Oil three days after the initial findings aired, to take samples of suspicious matter found on the stadium's event level. "They tried to tell us it was just material from the field surface," Segall told AB, hours before airing a follow-up report Nov. 19. "We had the stuff tested, and that's not the case. Some of it is little rubber pieces from the turf, but that's not everything that's in there."

According to Segall, within days Centerplate went from outright denial of an infestation problem to having a team of senior executives, including company president Des Hague, fly in to see food-stand conditions for themselves and assure the public that they were handling the situation with, as Hague put it, "deadly seriousness." The company released a statement Nov. 13 that reads in part, "[In] response to the recent food safety violations, Centerplate has hired additional operations management; more than doubled the internal health safety audit team; created a 24-hour hotline for fans and staff to immediately report any concern or known food service violation; and contracted with Orkin for daily inspections to accelerate efforts to remediate and prevent against pest control issues."

If the food-related public-relations fallout wasn't enough, pyrotechnic material detonated Nov. 15 after the home team scored its first touchdown against rival New England managed to set the stadium's synthetic turf surface on fire. A small blaze near the 50-yard line was quickly extinguished, and representatives of the surface's manufacturer, FieldTurf, were in Indianapolis the following weekend to address several areas of minor damage while the Colts played at Baltimore. Having noticed flames on the field, Al Michaels told his NBC "Sunday Night Football" audience, "Don't get me started on fireworks in indoor stadiums." And Al Michaels not wanting to get started on any topic says something, at least.

Lucas Oil Stadium representatives and Colts officials were likewise tight-lipped. AB's repeated calls to ask about potential changes to pyrotechnics policies went unanswered. "I don't know any answers to that question," WTHR's Segall tells AB. "I've kind of been up to my ankles in mouse feces."

Cleaning up the concessions problem hasn't come easy. By Dec. 14, at least 100 more violations, including dozens of critical violations noted on Dec. 6, had come to light. Says Segall, "During a Dec 13 re-inspection, the health department issued another three citations and $450 more in fines for problems that had not been corrected from the week before."