A glut of multipurpose facilities has created serious supply-and-demand issues during the current recession. 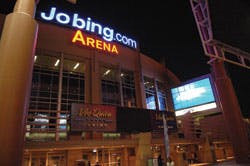 HELP WANTED The bankruptcy of the NHL's Phoenix Coyotes could have dire consequences for Glendale, Ariz.'s Jobing.com Arena.

A group of concerned Columbus, Ohio, citizens calling themselves Forward Together spent much of January and February rallying support at local restaurants and bars for a solution to the financial woes plaguing the NHL's Blue Jackets. A study commissioned by the Columbus Chamber of Commerce estimates that the team is losing $12 million a year, thanks to an unfavorable lease agreement with Nationwide Arena, which opened in 2000 on the former site of a vacant state penitentiary. The Blue Jackets, a team struggling on and off the ice this season, reportedly pay $5 million a year to use the multipurpose facility, plus an additional $4 million to operate and maintain it. As of this writing, a change in Nationwide Arena's ownership structure - perhaps even public ownership - seemed inevitable.

"It's not just about hockey," reads a statement on Forward Together's web site. "Forward Together is a reminder of how far we've come over the past 12 years as a city. It is also a reminder to each of us that, without a solution to the current problems facing Nationwide Arena and the Columbus Blue Jackets, a shadow is being cast on the future of the Arena District and its continued success. Forward Together believes that if nothing happens soon, there is a likelihood we could lose the Blue Jackets and that will be the beginning of . . . problems for the Arena District, Columbus and Franklin County."

Making the situation even more critical is increased regional competition for concerts and other special events from Kentucky's new Louisville Arena, slated to open in November a mere 190 miles to the southwest, and Conseco Fieldhouse, located 175 miles to the west in Indianapolis. Closer to home, there's Ohio State University's Jerome Schottenstein Center and Cincinnati's U.S. Bank Arena. According to The New York Times, concert promoters use some of those facilities as leverage against Nationwide Arena, forcing management there to guarantee as much as $1.1 million for a major band that would command $350,000 less at Conseco.

Increased competition for consumers' discretionary dollars is "crowding some forms of entertainment out" of multipurpose arenas in the current recession, says Mark Rosentraub, a professor of sport management at the University of Michigan. "That creates substantial pressure on whoever financed and owns the facility. People built these arenas at a time when they really thought that discretionary income was going to grow at a sufficient rate. When you build an arena, you're basically adding 150 to 175 inventory days to a market. The question you then have to raise is, given the spending levels and income-growth levels, are you going to sell those days?"

That's a good question. There are only so many monster-truck events, home-remodeling expos and boat shows to go around. So arenas, especially midsize ones, rely on concert tours to generate additional revenue. But Billboard.biz reports a 9 percent decrease in the number of concerts staged in the United States during 2009. Then there was the bankruptcy and dissolution of the Arena Football League and its af2 developmental league last year, potentially leaving as many as 40 facilities without an anchor tenant. In mid-February, the AFL announced plans to return in late April with a restructured business plan and 15 teams. But operators of facilities with former AFL and af2 tenants are still responsible for upkeep and maintenance. "You're going to start seeing the need for some of these facilities to go into bankruptcy," says Rosentraub. "I wish it wasn't the case."

As of this writing no major arena closings or bankruptcies had been reported, but the writing was on the wall in some cities:

Bleak as the arena landscape might seem, communities continue to plan and build new facilities. For example, in January, the $185 million Intrust Bank Arena debuted in downtown Wichita, Kan., with the largest seating capacity (17,500 for concerts, 15,200 for basketball and 13,300 for hockey) of any arena in the state. Home to the Central Hockey League's Wichita Thunder and already slated to host a regional round of the 2011 NCAA Women's Division I basketball tournament, the facility nevertheless failed to attract Wichita State University athletic teams, which still play on campus.

Meanwhile, University of Nebraska officials and Lincoln city leaders hope to open a new 16,000-seat arena by 2013 to replace the aging multipurpose Pershing Center. As a model, they are looking at the University of Virginia's John Paul Jones Arena - one of the country's most popular facilities for both sporting events and concerts, according to Sports Illustrated and Pollstar magazines. Initial plans call for the city to assume ownership of the proposed $344 million arena; Lincoln voters will be asked next month to foot the bill.

"This is not 'Grapes of Wrath,'" Rosentraub says, confident that the United States will rebound from the recession within two to three years - although probably with fewer active arenas. "I'm hoping the lesson learned is that we built too much. It's better to have excess demand than a glut of excess supply. And right now, we've got too many arenas out there."

For developers mulling an arena project, he recommends a careful analysis of the markets a specific facility would serve - including a detailed look at existing and potential inventory, as well as a conservative projection of discretionary income growth. It also wouldn't hurt for operators of existing arenas to conduct revised feasibility studies and determine how to survive another 24 to 36 months in a down economy.

Facilities that lack a plan to weather this storm are going to go under, warns Rosentraub. So don't be surprised to see tennis matches and religious gatherings coming soon to an arena near you. "Anything that covers expenses is good," he says. "You're going to see things in arenas that you didn't think you'd ever see."