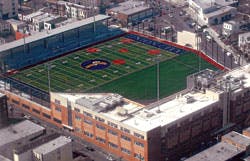 UP ON THE ROOF Roosevelt Stadium is built on top of a three-court gymnasium that seats 2,400 spectators, an auditorium, a cafeteria, a health center and other large spaces.

The news was almost too good to be true. In 2003, the New Jersey School Development Authority - a state agency that authorizes funding to special-needs districts - granted the Union City School District nearly $180 million to consolidate two aging but well-maintained high schools, Emerson and Union Hill, into one shiny new facility.

But then district administrators were faced with the tough decision of where to build the new school. Few options existed in Union City, considered the most densely populated municipality in the United States. The most logical piece of land - a two-block chunk - was home to decrepit Roosevelt Stadium, which opened in 1937, held 7,500 fans, and was where Emerson and Union Hill teams still played and practiced.

Faced with no other option than to demolish the stadium that hosted decades of games between the schools in a bitter uptown/downtown rivalry, representatives from the school district and architectural firms HOK in New York and RSC Architects in Cliffside Park, N.J., came up with a novel plan: build a 2,200-seat synthetic-turf football, soccer and baseball stadium on top of the school.

Today, Union City High School's new Roosevelt Stadium - apparently the only rooftop facility of its kind in the country - stands as a tribute to its predecessor, with a classic grandstand roof, arched entries and the old facility's original signage. And, at three stories up, it may just offer the best seats in all of New Jersey. "The views are incredible," says Jeannette Segal, a senior project manager at HOK. "They probably are the best of any high school stadium in the country. You can look out and see the Empire State Building."

Accessible from the exterior via a series of ramps or an elevator, and from the inside via three flights of stairs, Roosevelt Stadium also features field-level locker rooms and concessions. The sideline grandstand holds 2,200 spectators, and there's room for another 1,800 temporary seats for football games in the baseball outfield. The right field and left field wall hugs the educational wing, an L-shaped, four-story structure that houses classrooms for 1,850 students in grades 10 through 12. A three-court, 2,400-seat gymnasium, an auditorium and black-box theater, a cafeteria, a health center and media labs are located beneath the stadium.

Roosevelt Stadium, which also will meet some of the community's recreation needs, and the high-tech school itself represent an urban success story in one of New Jersey's poorest school districts, according to Union City School District superintendent Stanley Sanger. "These kids were coming from basically having no facilities, or very limited facilities, and now they have state-of-the-art facilities. That improves morale and allows the kids to play in the kind of place they were cheated out of for many years," says Sanger, a 1969 graduate of Emerson High. He adds that all sports teams at Emerson and Union High consolidated for the 2008-09 seasons (one year before the new school opened) so student-athletes could become accustomed to competing with - not against - each other. "It really is a feel-good story." 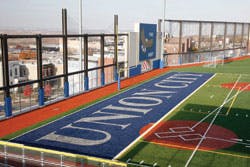 BARRIER GRIEF? School officials might have to add more fencing to keep pop-ups, home runs and field goals from escaping the confines of the third-story stadium.

Forget, for a moment, that the new Roosevelt Stadium is situated 28 feet off the ground. At first glance, it appears similar to other large high school stadiums. But there are unique challenges and obstacles that Union City High officials are still learning to overcome. "Up on the roof, you really are limited in terms of space," says David Clauser, the school's vice principal for athletics, who arrived in April - just in time to oversee the facility's finishing touches. "Typically, at halftime of football games, people walk around the perimeter of the field. You're not able to do that at Roosevelt Stadium. So, generally, people get up and roam the stands, and it becomes that much more difficult when you have nearly a full house."

Full houses were a frequent occurrence last fall, as the Union City Soaring Eagles took to the field for six consecutive home games. Fans were even turned away at the gates. But as the season progressed, and the team sputtered toward a 4-6 record in Group IV, the New Jersey State Interscholastic Athletic Association's largest and most competitive division, game attendance started to dwindle. "I think because we struggled on the field, we weren't as successful at the gate as we could have been," Clauser says. "During the last two games, we didn't get the same kind of turnout. Maybe, had we won two or three more games, we would have been turning people away again. I guess the novelty of the stadium and the success of the team that's playing at the stadium go hand in hand."

Clauser has high hopes for the inaugural baseball season. Last year, playing at a different facility, the Soaring Eagles advanced to the sectional semifinals. And with a strong breeze that blows from Roosevelt Stadium's home plate to right field, he is anticipating a lot of home runs this year. "It's going to be very interesting," he says. "I believe if the baseball team approximates or exceeds the success they enjoyed last season, we're going to do quite well in terms of fan turnout."

But back in early December, as he was in the process of lining up spring baseball scrimmages, Clauser still wasn't feeling completely comfortable promoting his new environs. "I'm a little embarrassed to e-mail other athletic directors and say, 'We have a turf field on the roof; why don't you schedule a scrimmage here? So I try to soft-sell it," he says. "I don't need to make it my trump card. If a school is interested in coming for a scrimmage, then it makes sense for me to throw out there that we'll be playing on the roof. But a lot of people already are aware of our facility, and I don't want to act like a spoiled kid."

Despite its charms, Clauser admits that a third-story multisport stadium brings with it some complications. For example, what if foul balls fly over the edge of the field and smash into the windshields of moving vehicles below on busy Kennedy Boulevard? Horizontal netting likely will be installed above home plate to contain foul balls, and additional fencing rims the outfield, but home runs and pop-ups still might escape the playing area (as did soccer balls and footballs) unless additional netting is added. Union City High has blanket liability insurance coverage, according to Dave Wilcomes, the school's principal, who graduated from Union City and played in the old Roosevelt Stadium. "We've had to adjust to everything in the building as we go along, including the athletic facilities," he says. "We anticipate whatever we can, but I'm sure there are going to be exceptions."

If you look beyond practical issues, though, Sanger claims the hardest part is over. "I think the biggest challenge wasn't the facility itself," he says. "It was really trying to pull everyone together, to chisel down that rivalry mentality - not only for the students, but for the teaching staff, the administration, the parents and the alumni. We had to come together as one, and do it as professionally as possible. That took a lot of work, and it's probably something we're still working on."