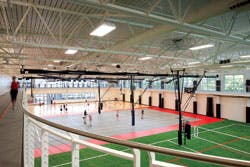 September saw the opening of a 70,000-square-foot addition to the 45-year-old Lake Forest College Sports and Recreation Center. New amenities include a three-court gymnasium with multiple surfaces to support a variety of sports, a two-level lobby and lounge for spectators and student activities, a mezzanine-level running track, new cardio and strength training areas, locker rooms, meeting rooms, a trainers' office with team treatment and hydrotherapy rooms, batting cages and dance studios. The $17 million addition features extensive use of glass, which augments connectivity within the building, while promoting a connection outward to the rest of the campus. . . 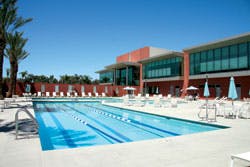 Students at California State University, Long Beach, have been enjoying the new 126,500-square-foot Student Recreation and Wellness Center, which features a landscaped entry plaza with an adjoining cafÃ© that provides an outdoor gathering space linked to the campus' circulation axis. Major components within the $60 million facility include a 20,000-square-foot cardio/fitness center, a three-court gymnasium, a two-court MAC, multipurpose rooms, two racquetball courts, a wellness center, a custom-made climbing wall, a swimming pool and spa, a running track and staff offices. A walled courtyard features a recreational pool and sand volleyball courts. . . 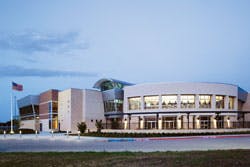 The Burleson (Texas) Recreation Department has opened the 70,000-square-foot, $16 million Burleson Recreation Center, known as the BRiCk. The facility includes a multicourt gymnasium with an elevated jogging track, a 25-yard pool, pool party rooms, a swim team room, locker rooms, weight training rooms, a group exercise studio, a climbing wall, a childcare area and a large meeting room with an outdoor patio. With the construction of a 25-yard outdoor competition pool with a diving board and plunge slide, the project also represents the first phase of an outdoor family aquatic facility. . . 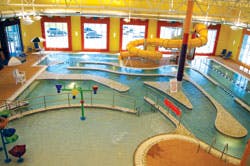 The 35,000-square-foot New Mexico Regional Aquatic Center opened in Las Cruces in October. The center features a water slide, a zero-depth entry, two 25-meter lap lanes, aquatic fitness and play areas, a lazy river and a therapy pool. Located within an existing complex that includes facilities for basketball, soccer, inline skating, skateboarding, baseball and softball, the aquatic center is opening in three phases. Future phases will include a gymnasium, a track, an expansive fitness area, meeting rooms and a 15,000-square-foot outdoor plaza.

The University of Arkansas has announced plans to build a new football center, to be located immediately south of Razorback Stadium. More than $12 million in donations have already been made toward the facility, which will include new locker rooms, meeting rooms, training rooms, a student-athlete lounge, coaches' offices, a recruiting reception area and a football museum. . .

The University of Nebraska board of regents has approved a $56 million plan to add approximately 5,000 seats to Memorial Stadium, increasing its capacity to more than 90,000 spectators. Approximately half of the new seats will be in suite or club areas. The plan also calls for a new grand lobby and an expanded concourse. . .

St. Joseph's College has announced plans to construct an $11 million athletic complex on 24 acres at its Long Island campus. The complex will include a field house, a track and several new athletic fields. . .

The New Mexico Highlands University board of regents has approved spending $645,000 to renovate Brandt Park, the site of the school's baseball and softball fields. . .

Voters in the towns of Mansfield, Ashford and Willington, Conn., have approved spending $2.1 million for a new track and other outdoor athletic facilities at E.O. Smith High School. . .

Melrose, Mass., mayor Rob Dolan has unveiled plans to use $5.5 million in revenue from a local municipal golf course to fund the renovation of the football and baseball fields at Melrose High School and the construction of two new athletic fields at a city park. . .

The Arcadia County (Calif.) board of supervisors has approved an $8.5 million budget and 19-month timeline to construct an outdoor aquatics center that will include a competition pool, a wading pool and a 5,400-square-foot support building with changing rooms, a classroom and staff offices. . .