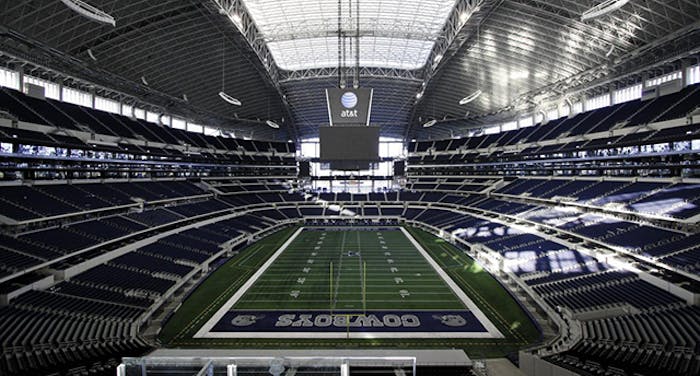 A man was injured when he fell from the first row of AT&T Stadium down to the field-level suites below.

Unfortunately, we're writing about this topic once again.

According to the NBC affiliate in Dallas/Fort Worth, a man fell from the stands at AT&T Stadium during the Texas-UCLA football game Saturday night critically injuring himself. The man, whose identity has not been released, was taken to a nearby hospital in Fort Worth after falling 12 to 15 feet from the first row of the stands to the field-level suites below. The fall occurred during halftime.

The man, described as being in his 40s, was upgraded Monday afternoon from critical to good condition.

"A fall from that height will certainly, if you strike your head, have the potential for sever traumatic brain injuries," Dr. Alex Eastman, interim director of the Trauma Center at Parkland Memorial Hospital in Dallas told NBC.

RELATED: What's it Like to Fall From the Upper Deck? A Fan Explains

An eye-witness sitting next to the fall victim says the he had been leaning over the railing for much of the game.

"At one point I even had my hand — I even grabbed his shirt a little bit and said 'Hey, you need to watch out,' you know?" Matthew Crites told KXAS Channel 5. "He was really getting into the game. He was leaning across the railing, kind of picking his feet up a little bit."

About 10 minutes later, the man fell to the field-level suites below.

According to AT&T Stadium officials, Arlington fire inspectors checked and verified that the railing height at the stadium "exceeds building code requirement."

Which brings up an issue Athletic Business has covered extensively over the years. Just how tall should stadium railings be?

According to this 2009 examination of the issue by my colleague Paul Steinbach:

The International Building Code calls for a minimum height of 42 inches for railings at the base of aisles, and sightline issues here are often unavoidable (though frequently addressed through the specification of Plexiglas or mesh barriers, or flat, angled steel as opposed to tubular railings). In front of fixed seating, the minimum requirement drops to 26 inches, or roughly knee height, regardless of the potential fall distance from the deck. "The reason it's allowed to be lower is you're walking parallel to it, not straight into it," says Greg Sweeney, director of technical design at Rossetti, the architecture firm that designed Ottawa's Scotiabank Place, where last December a man tripped in the aisle and sailed out of the arena's third level.

FULL STORY: Should Building Codes be Changed to Keep Fans from Falling?

There is no word on whether the man in the AT&T Stadium fall was intoxicated. However, as AB has previously reported, intoxication level shouldn't matter:

"No perceptual or motor ability or anything like that should have any bearing on whether that person can successfully be stopped by a railing," public safety expert Jake Pauls told AB in 2012.

Unfortunately, stadium falls are not a new issue in the Dallas area. Just across the parking lot from AT&T Stadium sits Rangers Ballpark in Arlington which has been the site of several high-profile stadium falls. The team eventually raised its stadium railing heights to 42 inches throughout the ballpark.