When there are nine inches of water on your hardwood court, who do you call first?

Tuesday, July 29, 2014: A water main burst under Sunset Boulevard, near the University of California-Los Angeles, spewing an estimated 20 million gallons of water across the campus and flooding numerous buildings, including Pauley Pavilion, the Arthur Ashe Student Health and Wellness Center, J.D. Morgan Center and John Wooden Center. Emergency response was immediate, though it took city workers several hours to contain the leak. 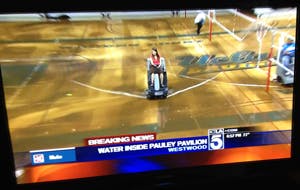 Wednesday, July 30: Portions of the affected buildings began reopening, and a campus-wide cleanup effort was under way. At the historic (and recently renovated to the tune of $136 million) Pauley Pavilion, however, the situation was grim. Eight to 10 inches of water had pooled on the court overnight, and though crews were working as quickly as possible to clear the water, athletic officials were unsure whether it would be salvageable.

"Rest assured that our iconic arena will be ready for the opening of the fall sports seasons," vowed UCLA chancellor Gene Block. "Crews are continuing to dry the arena using large blowers, and we'll assess the damage as soon as we can."

Thursday, Aug. 1: The athletic department had its answer. "The entire wood floor at Pauley Pavilion will be replaced with a new state-of-the-art court," said UCLA athletic director Dan Guerrero in a statement, reiterating Block's promised fall deadline. "Factoring in order, delivery, acclimation and installation time, it is our expectation that the new floor will be ready for play by the end of October. It is also our expectation that no regular-season men's or women's basketball games will be missed as a result of the court replacement."

Monday, Aug. 25, 2014: Four trucks full of new flooring and other materials necessary to install the new 28,000-square-foot floor arrived, and installation of the new court began.

Wednesday, Sept. 24, 2014: Installation of the new hardwood court at Pauley Pavilion was complete. "It was a rush all around," says Todd Goodridge, manager of technical services for Robbins Sports Flooring. Robbins had supplied the new court during the renovations at Pauley Pavilion, and Goodridge had flown out multiple times during the process to oversee the installation. Because of the existing relationship, one of the school's first calls the day after flooding was to Goodridge.

"We heard about it the night it happened," Goodridge recalls. "Then the next morning the school called us and wanted to know what they should do. We said 'Get the water off as fast as you can, and we'll see where it goes from there.' "

While quick action can often make the difference between minimal damage and complete replacement of a hardwood floor, the amount of water was just too much in this case, says Goodridge. "When a floor gets that wet, it expands too much and it will never go back to where it should be."

Once the decision was made to replace the floor, the focus shifted to quick installation. "They called back and asked when we could get someone out there to get started," Goodridge says. The task was quickly handed off to one of Robbins' local installers, HY Floor and Gameline Painting Inc.. "It was torn out in about two weeks, then it sat for two weeks while the concrete dried out, and we had materials there and ready to go the next week."

The materials were ready, but the floor wasn't, and the installation team first had to treat the concrete with a moisture suppressor before they were able to get to work. "They worked six days a week, 10 to 12 hours a day," says Goodridge, finishing a job in less than six weeks that he estimates would have taken 10 weeks under normal circumstances, and well in advance of the Bruins' first men's basketball game against Azusa Pacific on October 31.

This article originally appeared in the November 2014 issue of Athletic Business with the title "Salvaging the Bruins’ Ruins."

What's it like to be the installer in charge of such a high-profile project with a tight deadline? HY Floor and Gameline Painting, Inc. vice president Susan Heller takes us through the process:

We received a call from Pacific Floor Company — Robbins’ installer in the LA area and UCLA’s first choice to reinstall the floor — saying that the general contractor in charge of the Pauley Pavilion restoration, PCL, wanted to use a contractor signatory to the Carpenter’s Union. That meant we were “it” because HY Floor and Gameline Painting, Inc. is the only union installer qualified to install Robbins Sports Surface flooring in California.

By the time I got in the office on Monday morning August 6, the wheels were in motion. The estimator for Pacific Flooring who worked on the project, brought us up to date on what had happened in the previous week since the water main break: UCLA had brought in some moisture restoration experts who had removed most of the water in record time.

On Tuesday, Robbins transferred the material quote into our name and we were off and running.

Amazingly, the Pauley Pavilion floor had not buckled up off the subfloor like the floor in the Wooden Center, but the decision had been made that it was going to be torn out and it had to be done ASAP. Though the floor hadn’t moved (it was anchored to the cement slab,) the wood floorboards were cupped and who knows what sort of mold, mildew and bacteria could brew in the space between the wood floor and cement slab if standing water was allowed to remain? There was still standing water on the slab after they ripped it out, so it was a good thing the floor was removed.

It was a bit daunting to see the AD promising the media to have the floor ready to go before the start of the basketball season on October 31, but we were up for a challenge. Everything about this project was rush, rush, rush — and a leap of faith.  When we began negotiations with PCL, we were told that this job had to be completed by mid-October.  We all thought that was a very tall order for a floor that big, but we were willing to give it a try.

It would normally take us at least a week to tear that floor out, but it took the contractor at UCLA one day — the floor and the budget were big enough to bring in heavy equipment and demo experts.

For the first few weeks of August, we jammed in bid calculations and negotiations for Pauley Pavilion on top of our usual hectic work load. We had a lot of exchanges with the school because they wanted everything the same as before, which was challenging for us because we were not involved in the original installation.  For instance, the school wanted the exact combination of seal and finish that was on the old floor, which were from two different brands. And then we had to match the color of the paint exactly, but we were not going to use the same brand that was used in the original installation   So we had a lot of back and forth with the color-matching team and the school to get the colors right.

PCL wanted us to schedule our crew in shifts in order to make up time, but we don’t even have that many installers! We do have the hardest-working crew around and so we settled on a 58-hour work week. We secured local housing for our 12-member crew (our shop is located six hours away) with the plan that we would start the installation right after the Labor Day holiday and the floor would be completely installed and finished by October 17.

The milling and delivery of the wood gave us a few weeks breathing time to get through our crazy August rush. And while UCLA waited for the wood, the floor continued to dry out. But when the moisture content of the concrete slab was tested, the relative humidity level of the slab was at the top of the chart in many locations. We had to do some moisture mitigation and somehow squeeze it into the already tight schedule, so Robbins recommended we go with an underlayment called Versashield MBX.

Our crew, under the direction of our foreman Jaime Barajas, was amazing and installed the subfloor and floor faster than we ever imagined. After the first few weeks it became obvious that our crew was kicking butt. We completed the job by September 24 with just one call-back.