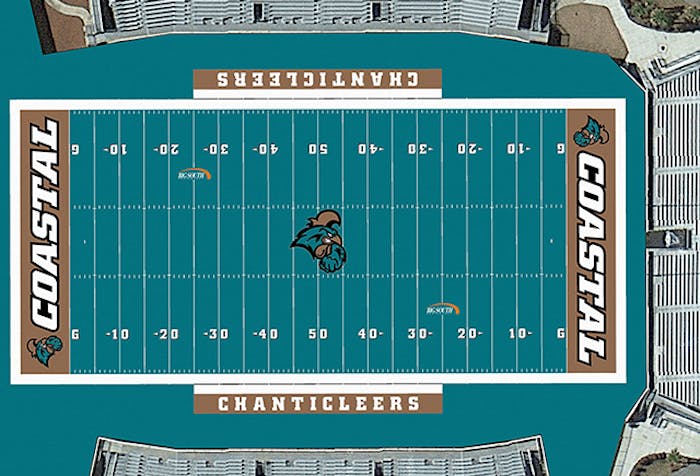 Coastal Carolina University's athletic department's official hashtag is #GoTeal. It appears they've followed their own advice when it came time to select a new playing surface for Brooks Stadium, home to the school's football and women's lacrosse programs.

On Friday, the school announced preparations had begun to install the Chanticleer's new "Teal Turf." The installation will be completed by mid-April and according to the school, will be the first teal field in the nation.

"When the decision to install an artificial turf field was made, it only made sense that the turf be teal," said Coastal Carolina interim director of athletics Matt Hogue. "In addition to our winning tradition, we are known nationally for our distinctive color scheme. And it's not just the color our teams wear, but a campus-wide identity. We felt this would be a great opportunity to further build that brand."

The project has a budget of $1.2 million. The school says the synthetic turf's 10-year lifespan will save money on maintenance, painting and other field upkeep costs.

Medallion Athletic Products of Mooresville, N.C., partnered with Shaw Sports Turf for the project contract after being selected through the State of S.C. procurement process.

Brooks Stadium at the TD Sports Complex opened in 2003, the inaugural season for Coastal Carolina football. It holds approximately 9,400 fans. Coastal Carolina, located in Conway, South Carolina, competes at the NCAA FCS level. The Chanticleers finished the 2014 season with a 12-2 record and advanced to the NCAA Division I Championship Quarterfinals where they lost to eventual National Champion, North Dakota State.

Colored turf is a growing trend at all levels of football. Last year, Eastern Michigan installed gray turf, joining Boise State University as the only other school in the Football Bowl Subdivision with colored turf. In NCAA FCS football, Eastern Washington University features an all-red playing surface, while Central Arkansas sports a purple and gray alternating tone. High schools have gotten in on the action, including this one with black turf.