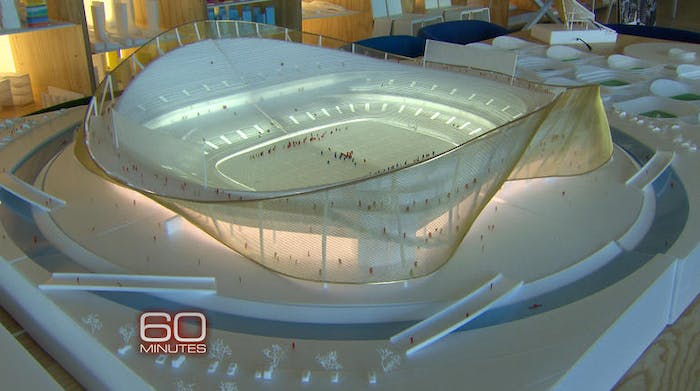 When the Washington Redskins eventually leave FedEx Field for greener pastures (a new stadium), that stadium will reportedly have a feature more familiar to medieval castles than to modern football stadiums: a moat.

The moat around the new stadium, however, is not intended to keep out marauding hoards. The moat is intended for use by kayakers.

Danish architecture firm Bjarke Ingels Group unveiled a model of the proposed stadium project recently on “60 Minutes.” You can view video of the segment below.

“The stadium is designed as much for the tailgating, like the pre-game, as for the game itself,” Bjarke Ingels told “60 Minutes.” “Tailgating literally becomes a picnic in a park. It can actually make the stadium a more lively destination throughout the year without ruining the turf for the football game.

The team’s current lease on FedEx Field goes through 2027, but owner Daniel Snyder has expressed interest in building a new stadium and officials in Maryland and Virginia seem willing to help him. Talks on where a new stadium would be located and how it would be paid for remain in the early stages.

Part of Snyder’s motivation to build a new stadium, according to the Washington Post, is keeping up with the Joneses. Jerry Jones that is. Snyder envisions building a stadium to rival AT&T Stadium, home of Jones’s Dallas Cowboys.

A new stadium might also allow Snyder to host a Super Bowl, something he’s reportedly been eager to do since he became an NFL owner.