Hosting Games In a Stadium Under Renovation

[Photos by Zachary Bland, courtesy of the University of Missouri]

Among the parking attendants, ticket scanners, concessions workers and security professionals working Memorial Stadium at the University of Missouri this fall, one individual holds an atypical football game-day job title: crane operator. As the Tigers and their opponents toil on Faurot Field, a giant boom looming beyond the stadium's south end zone has required someone to sit at the controls every home Saturday and keep it still.

"Normally, whenever they close down the job site at the end of a day, the crane is like a big weather vane. It just blows. It spins around. But you can't let it do that on game day," says Scott Radecic, founder and senior principal at Populous, the sports architecture firm behind the in-progress $99 million overhaul of the stadium's south end zone. "You have two choices: you either have to secure it, or you put an operator in it and he just sits up in the crane the whole game and makes sure that at no point would it ever blow and be over the field of play, and that's what Missouri chose to do."

During most weekdays, the crane is integral to the assembly of a structure that by fall 2019 will serve as the Tigers' football headquarters — featuring updated locker spaces, athletic training facilities and a weight room tucked underneath a variety of premium seating options.

Not that the crane's enormous steel arm is likely to block a punt or a field goal attempt if left unchecked. "It's just the optics of it," Radecic says.

The south end zone stands were gone this season, but much of Mizzou’s pregame ritual remained.

Timeline management
Athletic departments planning a major stadium renovation must take a good look at how best to communicate the future benefits of such a project while controlling the disruption it's going to cause on game day. "We work with the builder and the athletic department on what types of visual information they want to put up and when," says Radecic. "How long before the season starts do they start to communicate the changes that are going to be taking place?"

Usually, he adds, architect renderings depicting what the finished product will look like are completed in time for the athletic department's initial football ticket sales mailers.

Some stadium renovations — remodeling of luxury suites or expansion of guest services within a concourse, for example — can be completed within a single off-season. But a complete tear-down and replacement of entire seating sections, including upgrades to fan and player amenities, is likely to start mere days after a season's final home game and span 20 or more months, with the following year's full playing season landing squarely within that timeline.

That's just the construction part. Initial design begins a year earlier, with months of discussions about project scope and cost. Next comes multiple meetings with university leaders, athletics officials and contractors regarding site logistics. Whatever impact construction will have on stadium entry points, parking availability and stadium traffic routes — auto and pedestrian — needs to be determined and communicated with football ticket-holders as early as possible through a mix of web alerts, email and regular mail. 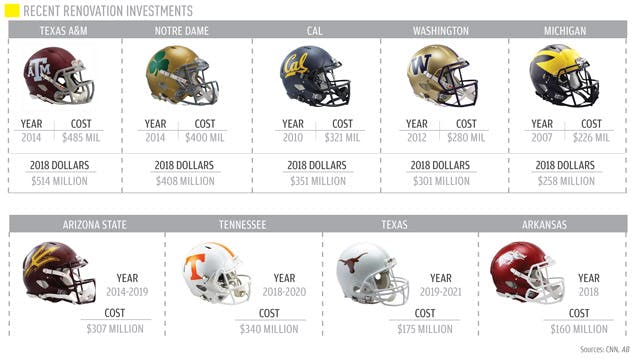 "There's a lot of conversation around how you message this to your fans, how you explain to them what the project is going to be, what the benefit is going to be in the long run and why you need to do the project," Radecic says. "You want to ensure the fans are having the best possible experience, even when they're coming to a game during construction."

Construction trailers and lay-down areas where building materials are placed and replenished as they are depleted can consume a lot of space, but certain game-day protocols can endure amid the chaos. "There are times, given the type of project we're doing, that we still have to keep certain things open, like a field tunnel, or multiple field tunnels, or an entry gate," Radecic says. "We may have to get people — home and visiting players, coaches, cheerleaders, mascots, police and fire, ambulance — on and off the field through the construction site, and that's happening at Missouri right now."

The goal is to preserve as much of the traditional pregame ritual as possible.

Radecic adds that construction is often suspended late on the Thursday of a home football weekend, leaving Friday for site cleanup and the possibility of a safety inspection, depending on where construction progress stands that week. Naturally, the site's dynamics change over the course of the project timeline — from the point of laying underground utilities to later hanging steel high overhead. Says Radecic, "Sometimes there are third-party inspectors who come out to be sure that the site is secure enough that people can pass underneath it, through it, next to it."

"Now with the steel going up, you can see the transformation in front of you," says Tony Wirkus, Mizzou's director of event management, referring to the south end zone project. "One game you have a few pieces sticking out of the ground, and then two games later you're like, 'Wow, we have two levels and it spans almost the entire space.' It's been very interesting to watch it take shape."

In 2019, the new south end zone will serve as the operational hub of the Missouri football program, while offering expanded game-day experience options for fans.

Moving parts
The most jarring result of a construction project like Missouri's is the temporary loss of seating inventory. Memorial Stadium temporarily surrendered approximately 10,000 seats when the old south end zone stands were removed, including general seating, a family section and the visiting team's spectator seats. According to Tim Hickman, Mizzou's deputy athletics director and CFO, patrons who qualified for the promotional family plan (two adults, at least three children) and wished to keep purchasing it were given a few options in other areas of the stadium. Visiting team fans were spread out over upper corners of the lower bowl and the upper deck.

"There are a lot of moving parts with that," Wirkus says. "We actually have a waiver from the SEC. There's a rule that you can't have the student section right behind the visiting team, but due to some of the logistical challenges this year with the teams taking the field, where the locker rooms are, we actually got a temporary waiver that allows us to have the student sections right there for the whole year."

Another major group displaced by the renovation at Missouri was the football team itself. With their game-day locker room gone, the Tigers have taken to a fenced-in compound of modular trailer structures and an air-conditioned banquet-style tent set up on a parking lot just beyond the construction zone. "With the locker room outside the stadium footprint, we actually have our security staff temporarily stop pedestrian traffic so the team can pass through, go into their compound and go back to the stadium when they need to," says Wirkus, adding that player patience will be rewarded next fall in the form of a 7,500-square-foot locker room — more than double the size of this year's makeshift facilities.

New fan amenities will likewise be worth the wait. The old seating section offered a place to sit and not much else, with no restrooms and little in the way of concessions beyond a portable beverage stand. "There were no hard built-in concessions stands and there were no restrooms available there," Wirkus says. "So that's going to be a great improvement for the fans to help with alleviating some congestion on the east and west sides."

For the time being however, fans hoping to get from the east sideline stands to the west side will have to head north, as there is no fan passage through the construction zone. Once work on the south end zone is finished, a circuitous concourse will likewise be completed. Premium experiences in the south end zone will include a ground-level club the team will traverse on its way to the field. "It's something you see a lot of facilities moving toward," Wirkus says. "We want to be able to capitalize on that experience for student-athletes, as well as for the fans down there."

In fact, end zone renovations in general are coming of age, according to Radecic. "It could be that it's just time for replacement. It could be that they have a desire for new hospitality that would be too invasive to incorporate into sidelines when you start thinking about loss of seats," he says. "It gives us standing-room areas where people can stand together socially and see the field, whereas maybe on the sidelines, there's no way to incorporate a place like that. That seems to be what today's spectators are looking for."

As Missouri's 2018 home football schedule nears its Nov. 23 conclusion, the toughest stretch of the athletic department's stadium renovation timeline is winding down with it. "There are a lot of logistical challenges," Wirkus says of hosting major college football games in a stadium under renovation, before offering advice to would-be renovators. "It's easy to say, 'We've always done it this way,' and, 'This isn't going to work.' Instead, approach it with an open mind and say, 'Okay, this is a problem. These are potential solutions, and let's make sure we have all of our options on the table.' You're going to need that positive attitude to make sure you pull off the logistics and make sure that game day happens — and that it happens as smoothly as it possibly can even with the challenges that are there."

This article originally appeared in the November | December 2018 issue of Athletic Business with the title "Hosting games in a stadium under renovation." Athletic Business is a free magazine for professionals in the athletic, fitness and recreation industry. Click here to subscribe.