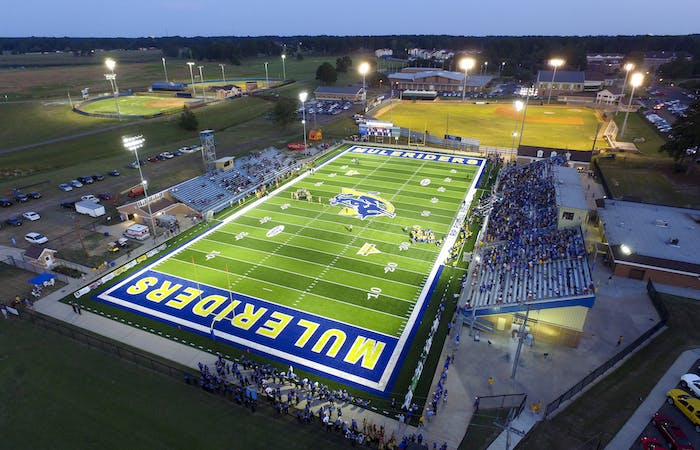 In advance of the 2016 football season, Southern Arkansas University of the Great American Conference installed Eaton’s state-of-the-art Ephesus LED Sports Lighting system at Wilkins Stadium.  Following their 48-9 victory over East Central University on October 20, this season, they ran their home record to 13-0 and completed their third consecutive undefeated season at home.

Although it may be a coincidence, athletic director Steve Browning admits the new lights have changed the atmosphere at the venerable venue which will be celebrating its 70th anniversary next year. “There is no doubt in my mind that the new lights coupled with the new turf separates us from other schools in our conference and the region as we have something they don’t.  It has really changed the atmosphere at Wilkins Stadium by enhancing the game presentation, bringing more fans out to the games and then keeping them engaged and entertained.”

Prior to the 2016 season, the Division II school replaced the 50-year-old light towers and metal halide bulbs at Wilkins Stadium with an Ephesus LED sports lighting solution that includes Ephesus All-Field LED sports lighting fixtures and the innovative AirMesh control system.  Additionally, they installed new green field turf with a vivid blue and yellow Mulerider logo at mid-field and their unique nickname printed in each end zone.

“The dramatic improvement in our lighting combined with the new turf was like going from a standard television to high definition,” admits Browning. “Our old metal halide lights gave off that soft glow whereas the new lights truly create a special environment.”

The improvements to Wilkins Stadium continued in 2017 with a new video scoreboard and then in 2018 with a remote upgrade to the lighting system to add Ephesus’ dynamic lighting scenes—providing the type of special effects typically experienced at professional sports venues.

“Due to the heat early in the season we always play our first few games at night so the ability to enhance the game presentation with light shows during halftime, for scoring celebrations and a post-game light show has been appreciated by our fans,” said Browning. “Obviously our hard-core loyal followers come for the football, but the ability to provide a better atmosphere has been key in bringing casual fans back again and again.”

“The experience at Southern Arkansas University is very common when a facility makes the switch to our LED sports lighting solution," said Mike Quijano, Eaton’s director of business development and product marketing for Ephesus. "For decades most facility operators never thought twice about their lights unless they were changing a lamp, but now that something better has come along, they understand how important sports lighting can be in creating a first-class environment,”

In addition to the enhanced game presentation, behind the scenes, the facility operations team benefits from nearly eliminating maintenance, remote diagnostics and troubleshooting, the ability to program the system remotely and an estimated 70 percent reduction in energy costs.

Head Football Coach Bill Keopple said that during the off-season the new functionality of the lights coupled with the new scoreboard are sure to benefit he and his staff in recruiting battles.  When they bring a recruit into Wilkins Stadium and show them what Muleriders game day looks like, it will clearly be a unique and powerful experience.

Wilkins Stadium is among the hundreds of sports facilities of all sizes, from community skating rinks and ballfield to professional arenas and stadium to make the switch to an Ephesus LED sports Lighting solution.  Some of these prominent venues include: Hard Rock Stadium (Miami Dolphins), Amalie Arena (Tampa Bay Lighting), the United Center (Chicago Bulls & Black Hawk), PNC Park (Pittsburgh Pirates) and Martinsville Speedway, the first NASCAR track to be lit with LED lights. For additional information, visit www.ephesuslighting.com or check out the video below from the 2018 Athletic Business Show:

This article is part of a monthly series on sports lighting. View the entire series here.