It's All About Control 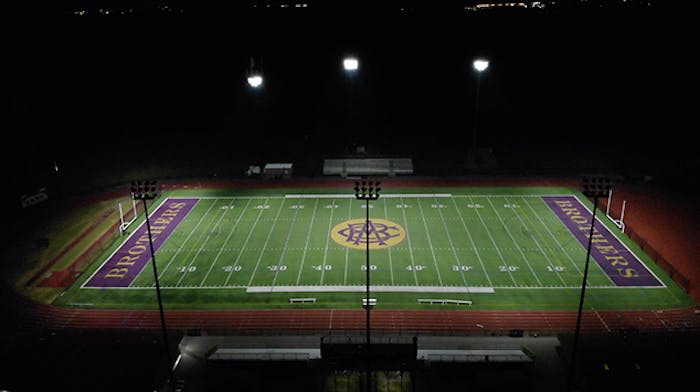 When Christian Brothers Academy (CBA) in Syracuse, New York, began investigating upgrading their existing sports lighting, they had a wish list, according to the Athletic Director, John “Buddy” Wleklinski.

The first wish related to the bottom line. As a small private school, CBA had distinct budget constraints.

It also had an antiquated field lighting system.

“We had lights from 1986, when we first put the stadium in,” recalls Wleklinski. “At different points, we had looked into retrofitting the lights, but we couldn’t afford it.”

Compounding the problem was the fact that games held on the athletic field were the subject of complaints from the adjacent neighborhood because of light spill, which, according to Wleklinski, was “blinding.”

“People used to tell us they could sit out on their front porch while a game was going on and read a book,” he noted with a wry laugh. “It was that bad.”

The system was also cumbersome to operate. As darkness fell during evening games, key personnel had to leave the field to control the lights from a separate electrical box. Even then, the field was not immediately illuminated, and appeared dim and distorted, something that translated badly when games were recorded, photographer and streamed.

“It really wasn’t a good experience for anyone,” said Wleklinski.

The year-over-year cost of illuminating the fields was another problem. Older systems, as a rule, are energy hogs, and CBA’s was no exception. Administrators were reluctant to turn on the lights until the last possible minute.  They even scheduled field use to avoid using the lights.

“Not only did the lights have way too much control over our athletic department, but the performance of the lights was not very good either,” says Wleklinski. “You’re talking about student-athletes not being able to see the ball as well."

As time progressed, the school was looking for a better option -- a system that was both higher-tech and more affordable. When they learned about the opportunity to become the first high school field to install the new Ephesus LUMASPORT sports lighting system this summer, they made the call to switch with support from the CBA Booster Club, which helped underwrite the project. 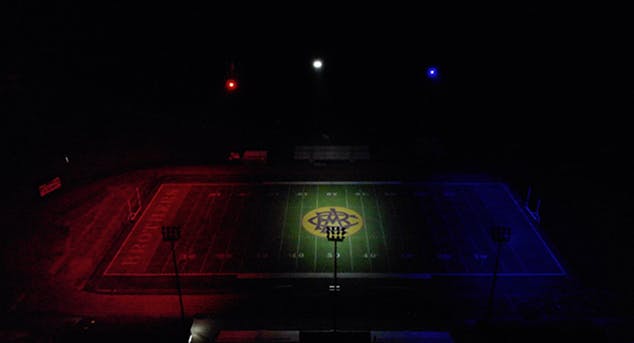 Although LED sports lighting can seem complicated, the decision came down to one simple word: CONTROL.

Enhancing the game experience for both student-athletes and fans is within the school’s control.

The cost for colored fixtures has been prohibitive for smaller facilities on a limited budget; by contrast, the flexibility of their new system allowed CBA to add color with the addition of eight color fixtures among the 72-fixture system.

“I just can’t wait to see the reaction of our fans when they see the colorful lights shows,” says Wleklinski.  It’s going to make our games into events.”

The new lights are also sure to be a hit with CBA’s large alumni base that isn’t always able to attend games but rather stream the action via NFHS Network, the streaming service of the National Federation of State High School Associations. This new technology is the best at enhancing the game presentation on video.

The ability to control energy and maintenance costs is an enormous advantage for CBA. Administrators went from being hesitant to use their lights to feeling absolutely comfortable with full illumination, not simply during the nearly 40 annual football, lacrosse and soccer games, but for practices, scrimmages or any other event.

“With the old system, we were replacing three or four bulbs a year,” notes Wleklinski. “It was really expensive and cumbersome, too; we had to get someone out there on a lift to change bulbs – or we had to play with the bulb out.”

Ability to control the system makes turning on lights an easy switch. LED lights reach full strength immediately, and provide consistent, full-spectrum illumination throughout the time they are in use. And with wireless control, many new systems let authorized operators control the lights from a mobile app – anywhere, any time.

Controlling the direction of the lights eliminate light trespass and sky glow and will win the approval of the neighborhood.

“Now we can just dim them down to 10 to 20 percent once the game ends,” says Wleklinski. “We have less spill and people can get out to their cars easily.”

The fact that lights can be left on at partial power can cost-effectively serve as security lights and lower the risk of after-hours trespassing or vandalism.

Like many people who chafed at the restrictions of their former sports lighting systems, Wleklinski is looking forward to the expanded functionality and ease the new system will offer.  “After many years of the lights controlling us and telling us what we could and couldn’t do, it will be refreshing to take control and make the lights work for us.”