The Kansas City Chiefs' Arrowhead Stadium is set to get millions of dollars of improvements after the venue was one of 11 NFL stadiums chosen as a 2026 FIFA World Cup host.

Kansas City Mayor Quiton Lucas said on Twitter that the improvements to the stadium, which has been home to the Chiefs since 1972, will cost $50 million. Quiton said he expects the upgrades to come from state funds and private fundraising.

“Only actual cost right now is $50M of improvements to Arrowhead Stadium,” Lucas said on Twitter, responding to KCUR-TV reporter Celisa Calacal. “Look for an ask to the state on that in addition to private fundraising to fund that step. That is unless the future of the stadiums chat progresses further.”

And we're here to answer. Only actual cost right now is $50M of improvements to Arrowhead Stadium. Look for an ask to the state on that in addition to private fundraising to fund that step. That is unless the future of the stadiums chat progresses further.

According to Profootballtalk.com, the team’s lease at the Truman Sports Complex runs through 2031, and Chiefs president Mark Donovan said recently the team could leave Kansas City for a new stadium in the suburbs.

Arrowhead Stadium received $13 million in upgrades during the 2021 offseason.

“We’re focused on getting this right, and then, coming out of it, it’s to be part of the discussion about what comes next,” Donovan told Joshua Brisco of 810 Sports. “As you can imagine, a tens-and-tens-of-millions-of-dollar project that we’re going to put in to get ready for (the World Cup), that’s got to factor into those discussions and that decision, and it will.” 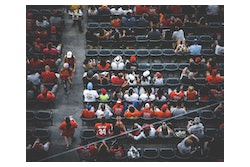 A new report suggests the NFL's Cleveland Browns are actively exploring sites for a new stadium, with the NFL leaning toward building a new stadium versus renovating the existing FirstEnergy Stadium.
June 20, 2022
Stadium & Arena

FIFA announced its selections on Tuesday, also naming three Mexican cities and two in Canada. This will be the first time the World Cup has been held with three co-hosts.
June 17, 2022
Stadium & Arena

The Willamette (Ore.) University baseball facility was built in 1989. In the summer of 2020, the clubhouse at John Lewis Field at Roy S. "Spec" Keene Stadium was renovated to include new lockers, flooring, restrooms...
June 13, 2022
Stadium & Arena

Golfers Set to Tee Off in Cardinals' Busch Stadium

Golfers in the St. Louis area will have a chance to tee off in the Cardinals' Busch Stadium this November as part of a partnership with Upper Deck Golf.
June 10, 2022
Stadium & Arena

The Iowa Soccer Development Foundation announced Monday that the Pro Iowa Stadium and Global Plaza has been delayed due to supply chain and cost challenges.
June 9, 2022
Stadium & Arena

Milwaukee city planners are so enamored with the success of the Milwaukee Bucks' outdoor Deer District, they're hoping they can sway the Brewers' American Family Field to create a similar space of at that venue.
June 7, 2022
Stadium & Arena

The Cleveland City Council is calling on FirstEnergy to relinquish its naming rights to the Cleveland Browns' football stadium. Lawmakers say that FirstEnergy's admitted role in a bribery scheme...
June 7, 2022
Stadium & Arena