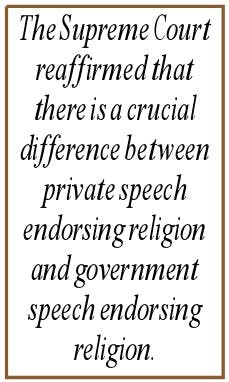 At the heart of last June's U.S. Supreme Court decision in Santa Fe Independent School District v. Doe was a fundamental disagreement over the meaning of the First Amendment of the United States Constitution. "Congress," the First Amendment states, "shall make no law respecting an establishment of religion, or prohibiting the free exercise thereof; or abridging the freedom of speech..."

A high school student in Texas, Melissa Ward, and her supporters argued that freedom of speech and the right of free exercise of religion permitted students to say a prayer over the public address system during pregame ceremonies at public-school football games. The two families who disagreed with the school district's decision to allow student-led prayer relied on the establishment clause of the First Amendment, which disallows the state (in this case the public high school) from establishing or promoting religion.

In declaring the Texas school district's prayer policy unconstitutional, the court reaffirmed that there is a crucial difference between private speech endorsing religion, which the free-speech and free-exercise clauses protect, and government speech endorsing religion, which the establishment clause forbids. A solid 6-3 majority ruled that the constitutional prohibition on state-sponsored prayer applies even to prayers led by students when the facts show that the school is orchestrating such religious expression. And the court made clear that the state may not sponsor elections to decide questions of public prayer.

The majority opinion relied heavily on the principles set forth almost a decade ago in Lee v. Weisman. In that 1992 decision, the court held that a public middle school could not invite a clergyperson to offer a prayer at graduation. In the Santa Fe case, the invocations were "authorized by a government policy and [took] place on government property at government-sponsored school-related events." Quoting from Lee v. Weisman, the court found that prayers under the Santa Fe policy bore "the imprint of the State and thus put schoolage children who objected in an untenable position."

This was not, the court noted, a case involving "equal access" policies, which allow student religious groups to meet on school property on the same basis as secular groups. Here, only one student was elected to speak each football season, and that student's speech was very narrowly restricted. The practical effect was to promote prayer.

While the school district argued that the policy was not coercive because attendance at football games was "voluntary," the court recognized the ambiguity of that term as it applies to the decisions of teenagers. Not only did the court note that some students, such as cheerleaders and football players, obviously were required to attend games, it also observed that attendance at football games was extremely important to many other students. Again referencing Lee v. Weisman, the court wrote that the constitution would not permit the school "'to exact religious conformity from a student as the price' of joining her classmates at varsity football games."

Finally, the court rejected the argument that this facial challenge was premature. The majority emphasized its concern not only with the serious injury that would result when particular students were forced to participate in religious worship at a school event, but with the other constitutional dangers: "One [danger]," John Paul Stevens wrote in the majority opinion, "is the mere passage by the [school district] of a policy that has the purpose and perception of government establishment establishment of religion. Another is the implementation of a governmental electoral process that subjects the issue of prayer to a majoritarian vote."

The school district, the majority opinion continued, "asks us to pretend that we do not recognize what every Santa Fe High School student understands clearly - that this policy is about prayer." And that the majority would not do.

In the wake of Lee v. Weisman, a number of schools devised "student-initiated, student-led" prayer policies that they hoped would survive constitutional review. After Santa Fe, the mere fact that a student leads a prayer will not save a school policy. In this case, the school was heavily involved in establishing and overseeing the policy. Any reasonable observer would perceive that the prayers had the government stamp of approval. The Supreme Court in Santa Fe served notice to these schools that their policies may yet be constitutionally infirm.

The court also put to rest the idea that a school-sponsored vote on prayer cures the constitutional violation. In many ways, a school-supervised election exacerbates the problem. Using the voting process to advance the religious views of the majority against the conscience of the minority violates a primary purpose of the establishment clause: to protect the rights of members of minority religions. Under Santa Fe's voting procedure, it was virtually ensured that members of minority faiths would never have the opportunity to offer a pregame prayer. Moreover, elections, by definition, divide the student body into competing religio-political factions - an issue that deeply troubled the court.

This holding on the impermissibility of elections in the context of school prayer will have significant application to other cases. For example, it would appear to invalidate the policies of some public school districts that use such elections on prayer for other school-sponsored events, such as graduation ceremonies.

At the same time, nothing the court said in Santa Fe means categorically that students cannot pray at public-school football games. Indeed, students may pray at football games in many different ways that are consistent with Santa Fe. Prayers may be offered individually or by groups of fans and students (including team members) before, during or after the game, as long as the religious expression occurs without school involvement.

An appropriate use of the loudspeaker would involve calling for a moment of silence, which could be used for prayer by those who wish to pray. The court's 1985 decision in Wallace v. Jaffree condemns a policy of silent meditation only if the state uses it to encourage prayer.

The next school-prayer challenge could already be on the horizon. The San Antonio Express-News has reported a brewing controversy at Lytle (Texas) High School, whose students this past January approved a practice that, along with a moment of silence, allows the student council president to lead students in prayer before football games. Supporters of this practice argue once again that the issue is about protecting students' free speech. Opponents argue that this is nothing more than a smokescreen for bringing religion into the schools.

Needless to say, the Santa Fe decision does not answer all outstanding questions about religious expression in public schools. But by maintaining consistency with earlier rulings in a firm majority opinion, without qualifying concurrences, this decision has produced more clarity in a very challenging area of the law.