Getting to Know You

With a new national program, NRPA aims to identify, qualify and train all recreation volunteers. 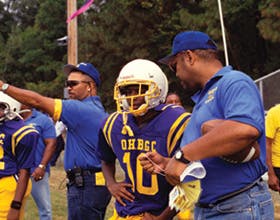 Several years ago, Michael Pfahl was hard at work administering the youth sports coach background screening program he designed for the National Alliance for Youth Sports (see "Past Imperfect," June 2003, p. 50). But one day, after reviewing some screening data, Pfahl had an epiphany.

"We were finding that about 7.5 percent of the would-be coaches had criminal backgrounds and 2.5 percent had criminal records that included sexually violent felonies," he recalls. "There are about 20 million volunteers who support parks and recreation across the country, and without them we obviously would not have quality parks and recreation programs. Of those 20 million volunteers only about 3 million are coaches. It occurred to me that if we were getting such a tremendous hit rate among volunteers with youth sports programs, what about the other 17 million volunteers?"

Before long, Pfahl left his position as NAYS' vice president of outreach to start his own consultancy through which he could devote his full attention to screening all parks and recreation volunteers. Last summer, Pfahl found a willing partner in his crusade - the National Recreation and Park Association. Together, they've developed a comprehensive national volunteer management program called Operation TLC2: Making Communities Safe (nrpa.org/tlc2). Launched at the NRPA Congress in October, 30 communities had signed on as of late December. The goal is to enroll 500 more agencies this year.

The initiative is three-pronged, with a focus on screening, identifying and educating volunteers. "We had been wanting to do more with volunteerism," says Susan Potts, NRPA's community outreach manager. "We found that volunteers in parks and recreation are doing a variety of things, and there aren't consistent practices across the board. That led us to come up with an initiative that would help train all volunteers, not just those in sports, but also those folks working at special events or in facilities as welcome hosts or desk attendants."

Yet, screening and identifying volunteers is just as important as educating them on their duties and roles as agency representatives. Says Potts, "Even if they're just doing clean-up in your park, these folks have access to vulnerable populations, whether that means kids or frail adults."

Adds Pfahl, who spent the first decade of his career as recreation superintendent and later as director of parks and recreation for Vandalia, Ohio, "We haven't done much in the way of qualifying volunteers, and then identifying them so that not only we can tell but the general public can tell that they're the right person for the right job."

To help parks and recreation agencies get better acquainted with their volunteers, Pfahl himself turned to some familiar faces. Not only is Operation TLC2 based on some of the concepts proven successful in the NAYS screening program, Pfahl and NRPA enlisted the aid of two of that program's partners, Southeastern Security Consultants Inc. (SSCI) and TSS Photography.

SSCI's role is on the front end; the company is responsible for subjecting potential volunteers to several background checks, including searches of criminal databases covering more than 75 percent of the country's residents. As recently as 2003, SSCI was unable to screen volunteer coaching candidates on a national basis. Says Pfahl, "We're finding that about 13 percent of the volunteers who sign a consent form for us to do a criminal background check come back with hits as a result of a criminal history occurring in a state other than the one they currently live in."

For that reason, Rodebaugh encourages recreation agencies to seek and review all available background information. "There may be crimes showing up that are not in their policy," he says. "But if those crimes are disturbing to them, they might want to change the policy in the future."

Once a volunteer candidate has passed the scrutiny of SSCI's background checks, he or she is issued an official ID card produced by TSS Photography. Each oversized ID features the volunteer's color photograph, his or her identification number and a color code (which changes from year to year), and can be customized with agency logos or expiration dates. "Parents are sitting on the bleachers sometimes 30 or 40 yards away," says TSS president Joe Lindenmayer. "It's nice for them to be able to see if a coach has his ID on a lanyard and it has the right color code."

A national network of franchises, located in 260 territories within an hour's drive of most metropolitan areas, enables TSS to conduct on-site group photo sessions for volunteers at an agency's convenience. And just like SSCI's background checks, the IDs have a turnaround time of five business days. "It's completely hands-off for organizations, if they want it to be," says Lindenmayer. "But we also have a component so if they want to take the picture, we'll allow them to do that, as long as they transmit it to us digitally. The neat thing is that we have control of the production of the IDs, so there's consistency throughout the country."

Consistency was one of NRPA's primary goals with Operation TLC2, which is chiefly influenced by a set of national recommendations devised last summer by a group of "thought leaders" at the association's headquarters. Those individuals - renowned risk management expert Gil Fried and youth sports psychologist Darnell Burnett among them - produced the program's $995 training kit, which features a 90-page resource manual accompanied by a 38-minute DVD covering volunteering basics: communication skills, customer service, conflict resolution, risk management, and working with youths and disabled populations.

NRPA designed the training program so that individual agencies can apprise their volunteers of specific local practices. "An agency needs the flexibility to go through its own policies and procedures," says Potts. "If customer service is a real issue in your agency, you could just go over the customer service portions of the DVD."

"In each category, we built in workshop drills and problem-solving scenarios that volunteers can do in a group environment," adds Pfahl. "The idea is to get them to interact so that when they're out in our parks and programs as volunteers, they're better acquainted and more comfortable with one another. At the same time, we're learning the various skills that they bring to the table - some of which we might not even know they had. A person might have volunteered for a one-day special event, say a marathon, and that's great. But maybe we didn't take the time to learn the fact that they're also interested in model airplanes or give guitar lessons, too."

Making efforts to better know volunteers goes hand in hand with Pfahl's guiding philosophy on volunteer management. "Let's get the best volunteers possible and wrap our arms around this group because they are advocates of what we do in parks and recreation," he says. "Our whole industry is based on bringing people together for quality recreation programs. But we have to be diligent in our recruitment of volunteers to supervise these people. We have the responsibility to make sure that our volunteers are cleared, qualified, trained and represent us well."