Research suggests that kids still stand to benefit greatly from strength training, but the movement is still in its infancy. 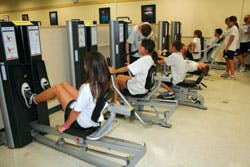 PERFECT FITNESS To maximize the benefits that strength training affords kids, it's recommended that they use equipment designed to accommodate their smaller body size.

Chances are most preadolescents didn't pick up the Aug. 17 issue of Time. If they had, and read John Cloud's cover story titled "Why Exercise Won't Make You Thin," they might have been discouraged from adopting physical fitness as a lifelong pursuit. And that would be a shame.

While Cloud cites recent research - including one study published last year involving 538 children - claiming exercise might actually encourage overeating by inducing hunger or the consumption of caloric "rewards," or both (a phenomenon called compensation), plenty of additional research trumpets the calorie-melting merits of strength training in particular. Last September, the Journal of Strength & Conditioning Research published the findings of Wayne State University's Kyle Hackney and others who suggest strength training significantly increases individuals' resting metabolic rate - a key factor in weight loss. "When you do a hard strength training workout that causes microtrauma to the tissue, whether you're nine years old or 90 years old, that microtrauma elevates your resting metabolic rate for up to three days," says Quincy College exercise science professor Wayne Westcott, who has written 24 books on strength training, as well as a journal article for the Association of YMCA Professionals rebutting Cloud's thesis (Westcott consults for South Shore YMCA in Quincy, Mass.). "And we're not just talking a little bit. We're talking in Hackney's study about an 8 percent average increase in resting metabolic rate 72 hours after a single workout."

Hackney's study involved young men, but strength training makes particular sense for preadolescents and adolescents, according to Westcott, who co-authored guidelines for the President's Council on Physical Fitness and Sports. First, supervised youth strength training is considered safe. The occasional weight plate dropped on a foot or a finger pinched in a weight stack notwithstanding, there has never been a serious injury stemming from supervised youth strength training, according to Westcott - at least none reported in all of the research literature published to date. No risk to skeletal development has been found to result from the activity, he says. In fact, bone density in kids who lift weights is typically four times that of kids who don't.

Second, youths are prewired for strength training success. "Kids are like puppy dogs," Westcott says. "They go hard; they rest. They're perfect for circuit strength training." This type of anaerobic activity is particularly well suited to the 17 percent of all American children and teens who are obese and who thus struggle with endurance sports such as basketball or soccer, if they participate at all. "They don't even like to play tag, because they're always it," Westcott says. "Pound for pound, they're not any stronger, but they can lift weights better than their peers, and it's often the first time they've ever succeeded at anything physical."

Finally, youth strength training is easier to accommodate than one might think. Several manufacturers offer lines of kids' equipment - including butterfly and lateral-raise machines, as well as those facilitating arm and leg curls and extensions - that are sized to allow for proper alignment of the user's joints with the machines' pivot points. Most children under 5 feet tall are too small for adult machines that incorporate rotary cams, according to Westcott, who adds that an easy way to confirm sizing problems is if pads on resistance bars slip against the user's skin during the exercise. Machines that facilitate exercises using a linear motion (bench, military and leg presses, for example) can serve adults and youths equally well, Westcott adds. One advantage of kids' versions of these machines, however, is their smaller weight increments, often down to one pound per plate. "The national governing bodies do recommend that children start with kid-size equipment," Westcott says. "Because it fits them better, they're a little more successful."

Still, research shows that the benefits of youth strength training can be realized using nothing but dumbbells (which lack the entrapment risk of barbells), medicine balls or resistance bands, meaning most health clubs may already have everything they need to start youth strength training programs. "It makes sense for clubs to consider doing that, because there is great interest in the obesity epidemic and the other problems that children are facing - everything from heart disease markers to type-2 diabetes," says Westcott. "How many clubs are almost vacant right after school between 3 and 5 p.m., before the adults get there? Why not have some programs?"

The biggest hurdle might be the attitudes of those who stand to benefit the most. That same issue of Time offered another piece: "Is My Child Overweight? Doctors and parents can't help kids get fit if they don't acknowledge the problem." Westcott has seen this denial firsthand. One study he conducted a few years ago offered free strength training to 40 fifth-grade students identified as having poor body compositions. "Half the parents said, 'No, no. My kid's going to think he's fat. He's going to think he's in a fat kids class,'" Westcott recalls. The 20 kids who completed an eight-week program of two weekly workouts featuring 20 minutes each of strength and endurance training saw, not surprisingly, significantly greater muscle gain and fat loss than those who opted out of the program. By the following fall, parents were calling for the program to be administered school-wide, and strength training became part of the required curriculum - a rarity at the middle school level.

Encouraged by that outcome and the resulting interest, Westcott took his program to a local high school. Only 95 kids out of 190 even agreed to have their body composition tested. Of those, Westcott identified 30 with the highest percentage of body fat. Eight agreed initially to participate in a strength training program, but only three actually followed through. According to Westcott, those who reneged had the common attitude, "I'm a loser. I've always been fat. I'd rather not try hard and be fat than do something else and fail again and still be fat." The experience taught the instructor something. "If you don't get the kids by middle school, the kids who need this, it's going to be very challenging to get them in their high school years," Westcott says.

Letting kids fall through the cracks is costly - not only to their own health, but the financial health of the nation at large. A study published earlier this year in the policy journal Health Affairs examined the effects of childhood obesity on hospital care and costs. It found a near doubling of obesity-related hospitalizations from 1999 to 2005, and an increase in costs from $125.9 million to $237.6 million. If properly emphasized and administered, youth strength training could be among the most potent weapons yet in the battle against childhood obesity. "Strength training is the best approach I know of because not only do kids burn some calories during brief and basic exercise, they're also increasing their resting metabolic rate," Westcott says. "So during those hours spent in school or sitting around watching television, they're still burning more calories than they were before. That's definitely a step in the right direction."