One on One: Angelo State AD Kathleen Brasfield Explains the Importance of Div. II 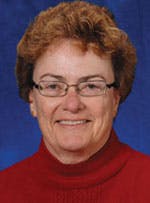 As the middle child in the NCAA family, Division II has long struggled to find its own identity - something between athletics as big business and scholarship-free competition for the love of sport. Earlier this year, the Division II Presidents and Management Councils introduced the branding initiative "Life in the Balance" as a means to emphasize the division's focus on developing well-rounded student-athletes - whether they're receiving $200 in athletics aid or a full ride. In January, Kathleen Brasfield, the longtime volleyball coach and current athletic director at Angelo State University in Texas, will begin a one-year term as chair of the Division II Management Council. Paul Steinbach asked Brasfield about what has endeared her to this level of collegiate competition for 31 years.

Q: Does the challenge begin with the Roman numerals?
A: Certain people have always been bothered by the I, II and III because it implies a numerical ranking or hierarchy, and it isn't really. It's just three different philosophies on where athletics fits into the scheme of things. So I am proud that Division II has found its niche and done a lot to establish itself as a member destination.

Q: What is Division II doing specifically to attract student-athletes and institutional members?
A: One of our branding themes is "I Chose Division II." Student-athletes choose to participate at a Division II institution for a variety of reasons and, of course, each one is unique to that student-athlete. But we believe that we are truly an amateur athletic division where student-athletes have an opportunity to grow as people, as well as compete on a high level and succeed academically. Likewise, we have worked very hard on branding so that schools will look at Division II and think, "Hmm, maybe that fits our philosophy better." And it's a revenue model that is affordable for institutions, because they pick the level at which they want to fund sports.

Q: Separate studies indicate that Division I has the fewest female athletics administrators, yet Division II female ADs are most likely to identify an "old boys network" in their ranks. Are you aware of an old boys network in Division II?
A: Oh, boy. Well, if there is one, it's never been an obstacle. I'll say it that way. I think that there's obviously a network in athletics, and that has more to do with being in the right place at the right time when you have opportunities for positions. I'll tell you this: it took a very brave president to name a female athletic director in west Texas. So I'll be forever thankful for a president who had enough courage to give me a chance.

Q: Do you have any advice for women aspiring to be athletics administrators, regardless of division?
A: Number one, you're going to have to work harder than everybody else. And number two, I think it's very important to never burn bridges. It's about relationships. When I was coaching, I always told my players that in 20 years they might not remember the wins and losses, but they would always remember the people.