Greenhouse Emissions from Urban Parks May Be Undoing Environmental Good

The environmental good done by urban green spaces may be undone by their maintenance. 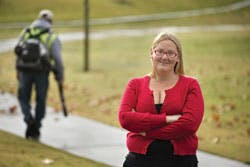 It seems counterintuitive to suggest that urban parks, fields and other green spaces that provide natural places of retreat to city dwellers are actually somehow harmful to the environment. A recent study of four urban parks by researchers at the University of California-Irvine, however, lends some credence to the suggestion - and it may change the way some parks and rec agencies think about their field maintenance practices.

"Carbon Sequestration and Greenhouse Gas Emissions in Urban Turf," recently published in Geophysical Research Letters, a journal of the American Geophysical Union, measures the abilities of park lawns and athletic fields to remove carbon dioxide from the atmosphere against the greenhouse gas emissions created by fertilizer production, mowing, leaf blowing, irrigation and other common practices used to manage the turf. Though the scope of the study was small - measuring just two greenhouse gases in only four parks built at roughly the same time within a limited geographical area - the comparison offers an informative snapshot of the global warming potential of urban green spaces.

"There has been a lot of research on the potential of lawns to store carbon - to essentially take it out of the atmosphere and put it underground," says UCI researcher Amy Townsend-Small, lead author of the study along with Claudia Czimczik. "And there have been other studies on nitrous oxide emissions from lawns because of fertilizer, but I don't know of any studies that have compared the two."

Researchers focused on four parks in and around Irvine, including some popular baseball and soccer fields. "These were heavily used fields," notes Townsend-Small. "Every weekend or evening we went out there, there were people playing."

Carbon sequestration - the result of grass photosynthesizing carbon dioxide, thereby removing it from the atmosphere and storing it in the soil as organic carbon - was, as expected, found in full effect at the parks' "ornamental" lawns (those not used for sports). Measurements at the athletic fields, however, yielded more discouraging results regarding the potential of such fields as "carbon sinks."

"We found the athletic fields in our study didn't store carbon underground," says Townsend-Small. "The soccer players essentially trample the grass so much that it dies every year, then it gets re-sodded and aerated. Aeration exposes the carbon to air, and that makes it available to decomposition."

Townsend-Small likens the two lawn types studied to those often compared in discussions about greenhouse gas sequestration in agricultural applications - tilled soils (most farmland, for example) and no-till soils. "The athletic fields are essentially getting plowed every year, whereas the ornamental lawns look great all the time, so they don't need as much maintenance," she says.

Having established the carbon sequestration potential of the lawn types, researchers also gathered information from parks and recreation staff about maintenance requirements such as the amount and types of fertilizers used, the fuel consumed by field-maintenance vehicles and equipment, and irrigation requirements. Researchers also placed static chambers atop turf throughout the parks to measure nitrous oxide emissions, suspected to result largely from inorganic fertilizers, "although there are still a lot of unanswered questions about what causes nitrous emissions from soils and how to negate them," says Townsend-Small.

Despite a calculation error in the first publication of the study - it overestimated the carbon dioxide emissions caused during maintenance, suggesting that they were as much as four times greater than the emissions stored - Townsend-Small sticks by the study's original warnings.

"I don't want to create the impression that we think lawns are bad," Townsend-Small says. "It's just that because of maintenance, fuel use, fertilizer production and irrigation, they are not necessarily carbon-neutral. All those things use energy."

Townsend-Small is careful to note that the results of the study may not hold true at other parks or athletic fields, as soil composition, grass species and a range of other factors related to geology, geography and maintenance techniques come into play. "This study is just a start, and I think there are many places you could duplicate it," says Townsend-Small, adding that a similar study on urban lawns' relationship to methane emissions could likewise be valuable. "These are lawns in one little part of the world, so these shouldn't be considered worldwide truths."

But Townsend-Small is willing to make at least one generalization, saying, "With less fuel consumption and less or organic fertilization, there certainly is the potential for some of these green spaces to be beneficial to the environment in terms of greenhouse gases."

Granted, urban parks and fields are not created to be carbon sinks; instead, they are created to address any number of recreational or space-planning needs. And the issue of global warming - however one feels about it - is a relatively recent talking point on the timeline of most existing urban parks.

"Even though there is potential for some green spaces to be beneficial to the environment, part of this depends on the purpose of the green space," Townsend-Small says. "Most green spaces have been around a lot longer than the recognition of this problem. But now that greenhouse gases are seen by many people as a critical issue, there's an effort by cities to reduce the carbon footprint. One of the ways cities are hoping to do that is through planting trees and grass."