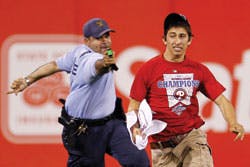 The imagery is almost comical. A slightly overweight police officer with gun drawn and pointed, chasing a towel-waving teen around the centerfield grass. One widely circulated still shot borders on cartoonish, the grimacing boy's eyebrow-raised glance toward his pursuers suggesting the jig was just about up. Certainly, fans at Philadelphia's Citizens Bank Park enjoyed what they saw May 3, cheering one of their own who had crossed over to the other side - the world of players, umpires and coaches.

What began as a lark, though, ended with a shock to Steven Consalvi, who fell face-first to the turf and lay motionless for a full 30 seconds - his muscle function completely incapacitated by a stun gun. The 17-year-old and his parents would later apologize to the Phillies, their fans and the Philadelphia police for their trouble, but the incident has sparked renewed debate on the use of Tasers to control crowds.

The Phillies - whose security officers apprehended a 34-year-old fence-jumper the very next night without the use of a Taser, even as fans chanted "Tase him!" - announced May 6 that team security personnel, not Philadelphia police, would be the first line of defense against future field intruders. "If greater force is necessary, requiring the assistance of Philadelphia police in making the apprehension, such assistance will be employed," the Phillies said in a statement.

Three nights later, a fan ran onto the field at a White Sox game in Chicago, where two frightening on-field attacks occurred within seven months of each other beginning in September 2002. Even so, the latest perpetrator was subdued and handcuffed by six security guards without the use of a Taser. At the following weekend's Players Championship, an intoxicated individual who had heckled golfers and fans alike was tasered by sheriff's deputies after repeated warnings to calm down went unheeded.

The Philadelphia Police Department defended its officer's Taser deployment, as did a number of Major League Baseball players and managers. "The players are obviously in great condition, but they're really defenseless," Minnesota Twins vice president of operations Matt Hoy told Associated Press reporter Patrick Walters. "If somebody wants to come out there and do something to them, they probably could. The hawk side of me says I'd love to have them all have Tasers, but I don't know if that's reality."

No one can dispute the Taser's effectiveness, if only as a deterrent. Matt Anderson, a 17-year-old attending a May 6 Twins game, told Walters that knowledge of security officers packing Tasers "definitely would affect my decision" to run onto the field, adding of the Phillies case, "When I first saw it, it seemed a little over the top and unnecessary for someone who wasn't causing trouble. But then when you think about it, if you let that go, what are you going to let go in the future?"

At least one law-enforcement agency has dialed back its Taser usage. A day removed from the Philadelphia incident, the Royal Canadian Mounted Police announced Taser policy changes for the second time in two years. According to the Calgary Herald, Mounties can now only use stun guns if a suspect is being physically combative or threatening physical harm. The Phillies case "is an extreme but timely example of why poorly crafted Taser policies need to be changed," read a May 9 Herald editorial. "Regulations restricting use of the weapons need to be spelled out, so there is little room for such discretion in the absence of far more aggressive behavior on behalf of a suspect."