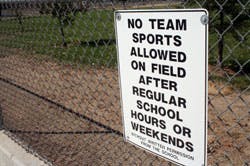 Public school grounds - with their fields, courts, running tracks and play equipment - make great places to get active, but only if people can get on them. A non-issue for kids when school is in session, access to these activity spaces for the community at large is not necessarily guaranteed after-hours. It's a situation that's most unfortunate in communities where alternative activity destinations either don't exist or are out of the economic reach of potential users.

A team of researchers headed by John Spengler from the University of Florida's Department of Tourism, Recreation and Sport Management has found that school administrators often deny after-school facility access for fear of getting sued in the event of an injury. "We've been looking at barriers faced by school administrators in opening their facilities after hours to members of the community for activity and sport," says Spengler, who has been studying childhood obesity for eight years. "And then we started thinking we should also look at the liability protections, because we were finding that liability was coming out as the number-one perceived barrier to opening schools after hours."

Spengler and his co-authors - Daniel Connaughton, Michael Carroll and Kelly Evenson - looked at existing recreational use laws in all 50 states to see not only how applicable they are to schools, but also how specific they are in terms of activities covered. Their study, to be published in the July issue of the American Journal of Preventive Medicine, found 42 states where minor legislative changes could improve liability protection for public schools. Some laws use broad terms such as "winter sports," "athletic competition," "recreational activities," and "sporting events and activities." Five states refer only to "recreation," leaving courts to interpret what that actually means on a case-by-case basis. If a child is injured riding home on his bike across school grounds, is recreation or transportation at issue? "If it's a broad term, it can be open to interpretation," Spengler says. "On the other side, if you list as many things as you can possibly think of, you could miss something."

Among states that get specific, 16 list bicycling, four include roller skating and rollerblading, and three mention skateboarding. Idaho, which Spengler singles out for its comprehensive language, is the only state that identifies "playing on playground equipment" as an activity protected from school liability in the event of a user injury. None has liability language specific to indoor activity spaces.

"The laws really could be much better geared toward the public school setting than they are now," Spengler says. "The legislative purpose could be tweaked some in these statutes to mention public schools and the types of things that people might do on school property - playing on playgrounds, running and jogging. It could also mention the importance of health and physical activity, which has become such a huge issue."

Spengler points to First Lady Michelle Obama's Let's Move campaign and the $500 million that the Robert Wood Foundation has pledged toward combating childhood obesity when he uses words such as "momentous" and "historic" to describe ongoing national anti-obesity efforts. But assuming state legislation is written such that school administrators' fears of getting sued are assuaged, does that necessarily mean they'll feel an urgency to open their facilities to the local community at large? After all, that will mean longer operational hours, extra staffing and additional maintenance. (Indeed, after-hours school access remained unchanged between 2000 and 2006, according to one study cited by Spengler and his colleagues.) "You're not going to solve all the problems by reducing liability, obviously, but it's one step potentially in the right direction," Spengler says. "Then some of these other issues can be addressed through joint-use agreements." Spengler offers as an example schools that benefit from the field maintenance resources of local soccer groups.

Moreover, he doesn't discount the intrinsic motivation among school administrators "to help the families of children in their school, as well as other people in the community, to become healthier."

In many states, though, realizing such altruistic goals may first require the action of state lawmakers. How best to encompass the public school setting in revised statute language is "up to the wisdom of our legislators," Spengler says. "But I think that however they decide to do that, providing better protection for our schools after hours has to be the bottom line."