A Colorado municipality is boldly investing in becoming a rugby mecca. 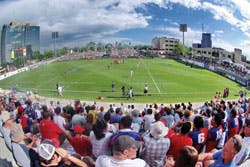 With a population of approximately 4,500 residents and occupying just 355 acres (or 0.6 square miles), Glendale, Colo., is a relatively small place. But it's not short on big ambitions.

In July, the city completed construction on the final phase of a large, $50 million sports and recreation campus called Infinity Park. At the heart of the park is a facility unlike any other in the country: a 4,000-plus-seat, rugby-specific stadium. Since opening three years ago, it's been the centerpiece of Rugbytown USA, the brand name city leaders recently bestowed upon Glendale. And with no precedent for a municipally owned rugby stadium - or for any rugby-specific stadium, for that matter - they're hoping the name catches on.

"We really don't have anything to use as a model, so we're just making our own path here," explains Linda Cassaday, the city's director of finance who oversees all operations of Infinity Park. "We're trying to promote rugby at every level - youth and adult programs, and local, national and international contests. We want to be the center of rugby in this country."

The plan seems to be working. For the past two summers, the Infinity Park stadium has hosted the preliminary rounds of the Churchill Cup, an invitational tournament staged by the United States, Canada and England that is the only large annual international rugby event in North America (the finals for the cup have taken place at Major League Soccer stadiums).

"We want to keep the Churchill Cup here, to establish itself as a home," USA Rugby CEO and president Nigel Melville told the Denver Post during this year's qualifying tournament. "Every year, it would get better and more people would get behind it as it grows. This year, as opposed to last year, people know what's coming. We want to continue that for years to come."

The facility also this year hosted the largest national rugby event, the Men's Club Championships, as well as international test matches and the National Collegiate All-Stars tournament. "We've really been trying to rebrand the city," says Cassaday. "Other cities have stadiums for soccer, football or lacrosse - those things have all been done."

But there's more to rugby than the idea that it hasn't "been done" before. In Glendale, this involves the personal story of now Mayor Pro Tem Mike Dunafon, a former all-conference football player at the University of Northern Colorado, who discovered rugby in 1978 while living in the British Virgin Islands. He went on to manage the United States' U-19 national team and create the nonprofit USA International Youth Rugby Foundation.

As Cassaday explains, Dunafon was one of several new city council members who seven years ago decided to try to whip up a fresh identity for Glendale, to make it into "something more than just this little metropolitan island surrounded by Denver . . . They wanted to bring people into the city and provide some development for our hotels, which were doing most of their business during the week, but not a lot of business on the weekends."

Dunafon came forward with the idea of building a facility to host the sport and attract its many weekend club players and their families. "He was captured by the camaraderie that existed in the rugby community," Cassaday says. "He was one of the leaders who came to the city in the early 2000s and said, 'We should change the city with something that has a community focus.'"

While a rugby stadium certainly has the potential for economic impact, its direct impact on residents' recreational needs is another matter. With that in mind, the larger park complex evolved, and the city created a master plan involving an existing city property next to the main municipal building and an adjacent property that was occupied by an aging apartment complex and parking lots.

In March 2006, the city issued $22 million in bonds to acquire the apartment property and fund the construction of the rugby stadium and the Glendale Sports Center, a community fitness facility. Offering Â­$8 monthly memberships to Glendale residents, the center was a critical component to get community buy-in for the larger park plan. "Obviously with an $8 fee, we're not going to be in a break-even situation," says Cassaday, referring to the center's annual budget. "But we see the operation of that facility as a really good investment of the city's revenues."

While developing the stadium and the fitness center, the city discovered a need in the local metropolitan marketplace for an events center capable of catering to large groups. Thus, following voter approval of a referendum to allow for a separate bond issue, the Infinity Park Event Center - featuring a 750-seat-capacity ballroom - opened in November 2008.

This past June, the city finalized the park complex with the completion of a large outdoor community park, at the center of which is a synthetic turf field surrounded by berm and capable of hosting smaller rugby events.

Now that all of the park components are in place, the question remains whether their operations can be reasonably funded without overburdening taxpayers. "Because this model doesn't exist anywhere else, it's been hard to know what to expect," Cassaday says. "We're not yet to the point where this is breaking even for us operationally, but we didn't think we would be there this quickly."

The city does have an anchor tenant organization for the stadium, the Glendale Raptors, represented by USA Rugby men's Division I and II club teams and a women's club team. The teams are actually part of the city's rugby program, and Glendale serves as the primary sponsor for them, providing uniforms and facilities. Because the stadium was designed with media capabilities, Raptors games are regularly broadcast on FSN Rocky Mountain, providing some helpful revenue to the city, which has also worked with an independent marketing firm to secure rugby-related sponsorships from big-name companies such as Guinness, Coca-Cola and Sports Authority.

"We're in a growth phase, but our sponsors realize that," says Cassaday, adding that Raptors games typically attract about 1,000 fans to the stadium, while larger games may attract 3,000 or 4,000. "Like us, they're excited about the potential for rugby here and in this country, and they want to get in on the ground floor. They want to be involved with Rugbytown USA. Just getting 1,000 people to a club rugby game has been a pretty phenomenal thing."