Awareness among NCAA schools of all things green continues to rise, but so do economic concerns. 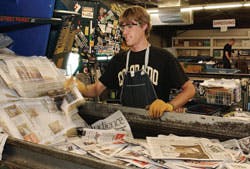 Sustainability awareness is on the rise within NCAA Football Bowl Subdivision athletic departments, but the country's economic state may be hindering the implementation of green initiatives.

These are among the key takeaways from the 2010 College Athletic Department Sustainability Survey, a measurement conducted for the second straight year by Mark McSherry, founder of ProGreenSports, a consultancy offering profit-driven sustainability strategies and services for sports organizations. Last year, as a graduate student in environmental services at Harvard University, McSherry was encouraged that 97 of 119 FBS athletic departments even participated in his inaugural survey. At the time, 15.6 percent of respondents (predominantly associate or assistant athletic directors in charge of facilities) said that the downturn was causing the athletic department to curtail some sustainability plans. By comparison, 26 percent of 73 schools responding to the 2010 survey cited the economy as a sustainability hurdle - a number well outside the survey's margin of error.

McSherry doesn't read the decline in survey participation as an indication of disinterest in sustainability, necessarily, noting instead the novelty of last year's survey, the credibility that came with his affiliation with Harvard and a lack this year of his own personal cajoling of schools to participate. In fact, he was heartened by several of this year's findings.

Like last year, recycling emerged as the number-one green initiative within athletic departments, a result that mirrors McSherry's research into the practices of professional teams. "I'm no longer surprised by both pro teams and colleges emphasizing recycling, because it's fan-facing, and it's easier to do than some of the other initiatives," he says.

However, McSherry was pleasantly surprised to see roughly 35 percent of his sample indicate that the athletic department was planning to measure the overall diversion rate (the proportion of the waste stream that is recycled, reused or composted) or the recycle rate for some or all of the department's operations. Moreover, nearly as many respondents (46.5 percent) indicated their department places high emphasis on events recycling as did those who likewise characterized as high their department's emphasis on office recycling (52.9 percent).

Composting appears to be an area with massive growth potential in terms of event waste management. According to survey participants, discarded food makes up the largest portion of the athletic department waste stream currently not being diverted from landfills. Says McSherry, "I was trying to get at opportunity - what do they see as the greatest opportunity to improve their diversion rate? - and it was food waste that was three to four times higher than any other: plastic cups, plastic bottles, food trays, containers."

McSherry adds that composting opportunities may hinge on whether a given campus or its surrounding community has the infrastructure to support a comprehensive effort. "I know Harvard is big on composting, and athletic department waste is just a portion of what they compost at Harvard," he says. "It's all dependent on whether a school has a cost-effective solution. I might have a New England perspective, but I think composting is past the early adopter stage. I think it's really getting purchase, because food waste is heavy, heavy stuff and you pay for weight. It's the greatest volume, the thing that athletic departments see they can focus on most."

Composting may have a reputation as the dirtiest of diversion endeavors, but the process is getting increasingly streamlined, thanks to the continued introduction of utensils, cups, trays and packaging made of organic polymers. Such items, which break down in a few months when subject to high-temperature composting, can be tossed right along with half-eaten food into compost receptacles - simplifying disposal efforts at the stadium and waste sorting at the compost site.

"You can't tell the difference," McSherry says, when asked about the performance of a fork made from corn. "It looks just like a plastic fork, and it works fine." Moreover, such environmentally friendly products can be purchased at negligible cost. According to Dave Newport, director of the Environmental Center at the University of Colorado at Boulder, introducing compostable products to the football concessions operation at Folsom Field three years ago added $7,000 to the entire season's budget over what had been spent on non-compostable plastics - and prices have been coming down ever since.

Despite these positive trends, the perceived impact of environmental programs on an athletic department's bottom line remains a key concern. Twenty-one respondents, or 29.2 percent of the sample, indicated that key decision makers in their department think green programs will have a slight negative effect on the bottom line. By comparison, 12 respondents (16.7 percent) report a departmental attitude of slight bottom-line improvement. A full third of the sample admitted to not knowing how to characterize the economic impact envisioned by their department's decision makers.

This no doubt explains the conservative approach to sustainability evident in McSherry's latest survey results. Most respondents indicated that their departments are paying at least moderate attention within their facilities to green lighting technologies - more so than solar, wind, geothermal and biomass systems, or the purchasing of green energy and carbon offsets. "Changes to lighting are right in front of their face and easy to understand, so it's not surprising at all that it's something that they're focusing on," McSherry says. "If you put in solar panels, it's high-visibility stuff and kind of sexy to talk about it, but compared one to one with the fossil fuel alternatives, it doesn't make economic sense unless you have great state or federal incentives."

With this approach, college athletic departments are no different than most commercial enterprises. McSherry points to an Ipsos Public Affairs survey, released in August, that found that recycling and using energy-efficient light bulbs are the "two primary measures implemented by businesses to become environmentally responsible."

Additional mainstream research has found that a gap often exists within U.S. companies between their sustainability vision and actual program implementation. McSherry, a mathematician, takes the discussion one step further, to measurement. In his latest survey, between 71 and 74 percent of respondents indicated that their athletic departments do nothing to measure greenhouse gas emissions in any of the following categories: fossil fuel and electricity use, employee commute, team and employee travel, fan travel to games, or vendor and food supplies. "People know what their electricity use is from their electricity bill, but are they taking the additional step of measuring greenhouse gas emissions? It is surprising that that's still lagging behind, but that's going to have to change," McSherry says, referring to mandates inherent in the American College & University Presidents Climate Commitment, to which 674 presidents have signed their names as a pledge toward campus-wide carbon neutrality (the number of presidents from FBS institutions who have signed the agreement remains unchanged from last year at 61). "My guess is the schools are doing university-wide measurements of greenhouse gas, and the athletic departments don't even know."

That's not all athletics decision makers don't know. According to the latest survey, more than half of the respondents note that the reason behind their department's reluctance to fully embrace sustainability is what they see as an unclear return on investment. "It always turns up at number one," McSherry says. "The pro teams and the athletic departments are really businesses, and so they all have accountability."

That said, there seemingly is nothing holding athletic departments back philosophically. Clear pluralities of respondents indicated that they are not concerned with green programs being a passing fad, generating negative reaction by at least some fans, generating negative reaction by the press, or interfering with game enjoyment. "I pay attention to the passing fad question as a leading indicator," McSherry says. "Just like positive trends, there can be a tipping point on the negative trends. Fifteen, 20, 30 percent saying green is a passing fad, that might be a sign that this green wave is lessening in intensity."

That's not the case - this time. How much impact the U.S. economy has on trend data in future surveys remains to be seen. But for now, at least, the fact that athletic departments aren't treating sustainability as yesterday's news pleases McSherry. "It's encouraging," he says.