One on One: Environmentalist Allen Hershkowitz Says Sports Can Aid Climate Change

How Can Sports Help Environmentalists Win the Climate Change Battle? 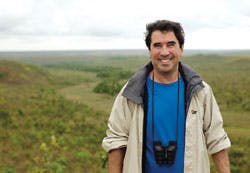 It's hard to miss 28 thermal solar panels mounted to a ballpark that will turn 100 years old in 2012. And that visual may be more powerful than the 37 percent reduction in water-heating energy that those panels - affixed along the first-base side of Boston's Fenway Park - make possible. "Sports is culturally iconic," says scientist Allen Hershkowitz, a 22-year veteran of the National Resources Defense Council, a nonprofit environmental action group. "It's not the biggest polluter in our economy, but it is one of our biggest cultural influences." In 2003, Hershkowitz was asked to help green Lincoln Financial Field in Philadelphia, and he's been harnessing the power of sports to change public perception and behavior related to environmentalism ever since. He helped design software put in use this season by Major League Baseball that monitors the ecological footprint of all 30 clubs, and the NFL, NHL and NBA are lining up to adopt similar programs. Paul Steinbach asked Hershkowitz how sports can help environmentalists win the climate change battle, or if there's even enough time left on the clock.

Q: What impact do you envision for your data-gathering software?
A: I've been doing environmental work for 30 years, and never once have I encountered a situation where measurement did not lead to improvement. You can't improve what you don't measure. Because the St. Louis Cardinals started to measure their energy use, they identified opportunities to reduce it. In the last two years, they reduced their energy use at Busch Stadium by 23.9 percent.

Q: Is that enough?
A: There is no one silver bullet that's going to address the global warming crisis. Every day, we pump 90 million tons of global warming pollution into the atmosphere. It's not coming from one source. It's not just the United States; it's not just China; it's not just General Motors. It's coming from literally millions and millions of sources, and the way we're going to get out of this situation is by making millions and millions of environmentally intelligent decisions. Civilization has its costs. But what sports is doing that is enormously valuable is using its visibility to educate people. It's telling people that it's okay to do something small. Actually, that's all we can do. It's just that we have to get millions of people to do a lot of small things. Sports is not going to solve the climate crisis, but it is going to help move our economy and our society in the right direction.

Q: How is sports environmentalism redirecting the economy?
A: It's really affecting the supply chain. All industries meet on a football field - auto, steel, plastics, textiles, food and beverage, water, energy. If they start to see that the teams and events they are supporting are embracing environmentalism, they start to think about their own behavior. Through subsidies and regulatory exemptions, we have made it very cheap to use coal and oil in this country. The dilemma is scientists are telling us we don't have a lot of time to continue to rely on fossil fuels.

Q: Do you ever allow yourself to consider that it may be too late?
A: I work every day to reduce the problem of global warming. Am I going to clean up the world singlehandedly? No. Is the problem solvable? I don't know. Do we need to try to solve it? Definitely.