The Formula for Energy Efficiency in Windows

Shedding some light on windows that adjust to outdoor conditions 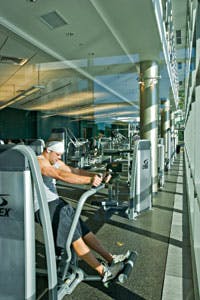 A view through the window of a recreation center

The formula for energy efficiency is not easy to figure. A primary way to cut down on the electricity costs associated with artificial lighting, for example, is to include more daylighting in the plan. More windows, however, means more solar heat gain and less insulative value, even in this era of triple-paned units and low-E coatings. (Also confusing: Solar heat gain is, sometimes, desirable.)

"The building envelope has the greatest impact on energy performance," says Mark Gelfo, a sustainability consultant with TLC Engineering for Architecture in Jacksonville, Fla. "Everything else being equal, if you have better glass and better insulation, it's going to drive your energy costs down quite a bit. And certainly there is the impact of daylighting, too - you're always trying to find that balance. You want more glass for daylighting and views of the outside, but does it impact the energy performance of the building?"

The state of the art in glass is probably dynamic glazing, in which the pane's light-transmission properties change depending on available sunlight (photochromic), temperature (thermochromic) or even on command (electrochromic) using an electric current applied to a coating on the glass. While the cost remains high compared to static forms of glazing, this is somewhat offset since it does away with the shading devices now considered a standard aspect of energy-efficient building design.

"I haven't seen auto-tinting glass used in a building yet; that's really newfangled stuff," says Gelfo. "We use fairly standard glass; we find there's a diminishing return on some of the more cutting-edge units. And also, there's another trade-off: Tinting is good, but then the more you tint the glass, the less light actually is coming in, leading to more reliance on artificial lighting."