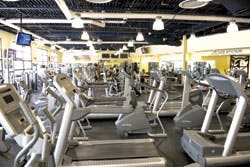 The fitness center is free to registered full-time students and faculty, though to generate enough income to partially subsidize the fitness center, a membership fee is charged to part-time students and others wishing to join. The college does have $100,000 available this budget year, so it decides to move ahead with the upgrade by pursuing a municipal lease approval. The college will finance the entire $275,000 upgrade by agreeing to pay three annual advance lease payments of $97,204.37 at a 6 percent annual percentage rate. The first payment is not payable until all items have been delivered and installed and the updated fitness center is operational. At the end of the lease term, the college owns the equipment for a $1 buyout.

This example illustrates how an entity wishing to make capital improvement purchases can do so while having just a portion of the capital available in its current budget. The college benefits because its fitness center is now state of the art. The students, faculty and members all benefit because they now have use of the latest fitness equipment. The vendors benefit because they are able to consummate a sale now rather than waiting until the entire $275,000 becomes available in a future budget - if it does at all. Finally, the leasing company benefits because it will earn a 6 percent return on its investment in an entity with an excellent credit and bond rating. The students, college, vendors and leasing company are all winners - and the play that led them to paydirt is municipal leasing.

WHAT IS A LEASE?

A tax-exempt municipal lease is a financial instrument that allows qualifying government entities to acquire essential, new equipment. The lease is a financing transaction of the installment sale type, with extremely attractive terms and streamlined documentation in which the lessee, or borrower, is part of a state or local government.

In order to qualify for a tax-exempt interest rate, the "municipal" entity must have one of three powers: 1) police, 2) eminent domain or 3) tax. Virtually any state, county, city or municipal government agency qualifies for municipal leases under IRS Section 103. Consequently, law enforcement, public safety, fire, rescue, EMS, water and port authorities, school districts, community colleges, state universities and hospitals can all use municipal leases to purchase nearly all types of essential-use equipment, vehicles, land and/or buildings. There may be exceptions, when a not-for-profit corporation also can qualify for tax-exempt financing.

"Essential use" becomes the primary factor when the leasing company, or lessor, is making its credit decision. If the equipment is of high essential use, the lessee credit can be marginal. As the essential use lessens, the financial strength of the lessee becomes more important. For example, even a nearly bankrupt school district would continue to make lease payments for a phone system since it could not possibly operate without telephones. However, in a case in which a city wants to lease purchase a water slide for a local park, the water slide serves no essential purpose for the city and thus the motivation to pay for the slide is significantly less if funds become tight.

The overriding reason why government entities, municipalities, colleges and universities lease is to spread the costs of capital acquisitions over several fiscal periods. The entity may lack the revenues to make outright cash purchases or face a backlog of capital replacement needs too large to finance in a single year's budget. By spreading the cost of acquiring expensive equipment over several years, the entity can more easily match the revenue earned from user fees or other funding sources. Moreover, the approval process for a lease is often simpler and quicker than alternative means of financing. Funding for each yearly payment is accomplished through the normal budget process and is often simpler to allocate within a capital budget.

In addition, municipal lease rates are lower than conventional loans or standard commercial leases. Typical municipal lease applications are one page, so the application process is easy. Most funding sources give same- or next-day approvals, so the process is also very fast. Non-appropriation language is typically automatically included in the lease document, and there are minimal documentation and underwriting costs at the closing of the lease. Finally, you can lease-to-own. At the end of the financing term, the lessee may take full ownership of the asset being financed for a nominal purchase option.

And the capital improvement purchases that can be included in a lease are virtually limitless. Organized, formal lease programs can be set up with any company that sells products used by an entity in the normal course of conducting its business. Companies wishing to establish lease programs must demonstrate financial strength, as well as the ability to manufacture, deliver and arrange for the repair of their products. Once a formal lease program is established, a vendor enhances its ability to make sales, since financing the purchase now becomes an option that did not previously exist.

There are laws in all 50 states that generally make it impossible for state, county and municipal governments to incur new debt requiring payments that extend over multiyear budget periods. Of primary concern is that until those future budgets are formally approved and voted into law, there is no legal authority to bind the government entity to make future payments. Bond issues are very complicated legal documents, and because they can have a direct impact on every taxpayer, bonds typically require voter approval. Consequently, bonds are generally used only for the most substantial infrastructure projects such as sewers, roads and large building projects.

However, because municipal leases automatically include non-appropriation language, they will be readily approved by the municipality's legal counsel. Most government entities would not be allowed to sign a municipal lease without non-appropriation language included in the legal document, and most entities treat their lease obligations as current expenses and do not characterize them as long-term debt obligations on their balance sheets. Non-appropriation language effectively relieves the government entity of the obligation to pay in the event funds are not appropriated in any subsequent budget period, for any legal reason. This is why municipal leasing is a risk for the leasing company, which relies heavily on a municipality's bond rating (measuring financial strength) and its Dunn & Bradstreet report (showing payment history) in making the underwriting decision.

As in all financial transactions, there is an order of events that dictates the timeliness of the entire process. Since all leases involve the participation of at least three different entities - the lessee, the vendor(s) and the leasing company - the speed of the process hinges on by the timeliness of the entities involved in any given transaction. Lease acceptance may be delayed pending an approval at the next board of directors meeting, for example, or funding of a lease may be delayed by lengthy manufacturing or installation processes.

Still, the leasing process typically unfolds in the following way: The lease application is completed and submitted to underwriting. Once the application is received by the underwriter, there may be a request for additional vendor information from the invoice submitted and/or for more current financial information from the lessee. In the best case, the lease is approved. The approval will include contingencies; the maximum term of the lease; the monthly, quarterly and/or annual lease payments; the approval expiration date and the date by which the offer needs to be accepted by the lessee. If accepted, an original signed lease document is returned to the funding source with the deposit, if any is required. Also, all contingencies, which invariably include insurance on the leased items, must be met. Once the original lease document is received and reviewed so that all contingencies are met, the purchase order is issued from the funding sources to the vendor. All deliveries and installations must be completed prior to that expiration date. If more time is needed for manufacturing and for delivery and installation, a lease approval extension must be granted by the underwriter. Once delivery and installation are complete, a site inspection is scheduled to ensure that all items have been delivered and are in good working condition. Once the site inspection is complete and the lessee acknowledges its satisfaction, the vendor is paid and the lease is funded.

If approached properly, municipal leases offer government entities the opportunity to improve their facilities and services in any number of ways now, even if the cash needed for an outright purchase isn't available until later.