A newspaper series prompts Ohio's State Athletic Association to offer itself as a guide in regulating youth sports. 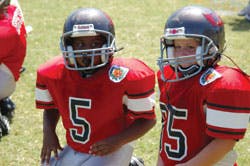 TEAMWORK The OHSAA is willing to be a player in developing regulations and oversight for youth sports leagues.

Last spring, Lucy Gonzalez, a 16-year-old junior at Dublin (Ohio) Jerome High School, staggered off the soccer field after a soccer ball slammed into her head. Her vision was blurred and she could barely understand what her coaches and teammates were saying. The signs were obvious. She had just suffered a serious concussion - her third in 10 months. After years of pushing herself to excel in several youth sports leagues, her soccer career was over in an instant. Lucy's story was just one of several featured in a Columbus Dispatch five-day series, "Little Leagues, Big Costs," which exposed the potential health risks to participants within Ohio's $60 million youth sports industry. The articles uncovered coaches and parents pushing young children to their limits, resulting in great financial, emotional and physical costs.

In response to the series, the Ohio High School Athletic Association offered to provide its support in regulating the state's youth sports leagues. This move potentially represents an unprecedented relationship between scholastic athletics and private youth sports leagues. While no formal action has been taken, the Dispatch reported that Ohio Gov. Ted Strickland and the state's high-ranking sports officials agree that there's a need to look into the regulation of youth sports.

The Dispatch series, while praising the positive impact that coaches and volunteers have on young athletes, also uncovered a system fraught with problems. The state's many youth sports leagues are run by a variety of entities including municipalities, nonprofit organizations, for-profit groups and individuals, making it difficult to create a single governing body to develop standards and provide oversight of coaches, players and parents. Hoping to create a star athlete, parents will spend thousands of dollars on coaching, equipment and travel, while packing as many games as possible into their kids' grueling, year-round schedules. This leaves still-growing kids susceptible to burnout and chronic injuries. Last year, R. Dawn Comstock, an epidemiologist at Nationwide Children's Hospital began tracking injury rates among high-school athletes who played youth sports. The rates among girls who played youth basketball or softball were double those of their high-school counterparts and triple among boys who played youth baseball and basketball.

"There are people in the schools who will tell you that by the time the youngsters are sophomores or juniors in high school, or maybe even freshmen, they don't go out for anything because they are absolutely fried," says Daniel Ross, commissioner of the OHSAA.

And the ones who do play are increasingly specializing in one sport in the hope of attaining an athletic scholarship. Ross has heard from OHSAA-member schools that the number of three-sport athletes is in decline. "If they're going to play that sport in college they tend to specialize, but the chances of them playing that sport in college are slim," Ross asserts. The focus of some of the youth leagues is to groom young athletes from an early age to be good enough to earn an athletic scholarship in college, when the reality is that for most kids, high school will be the last time they put on a uniform as part of a team. Says Ross, "They are nine times more likely to get an academic dollar before they get an athletic dollar."

Oftentimes, youth sports leads to skewed expectations by the time the young athlete reaches the high school level. "There are a lot of habits that are created and situations that occur in youth sports that may not be appropriate," Ross says, "and if they are not appropriate we certainly do not want those habits carried on into high school sports."

The burgeoning numbers of youth leagues has in part been caused by many school districts' loss of funding for athletic programs, and elite club teams are luring star athletes away from their high school. Some worry that with deeper budget cuts, high school sports programs could eventually be run by the private sector. Educators run sports programs differently than do for-profit organizations. Ross sees importance in that distinction, and feels that OHSAA could use its existing resources to assist private organizations in youth sports oversight.

As with most state athletic associations, the OHSAA already has a system in place for training and certifying coaches, enforcing rules, performing background checks and providing athletic training.

A standardized system could also help track youth sports injuries. Some Ohio youth sports organizations have expressed interest in meeting with the OHSAA and state legislators to formulate ways to create regulations and standards within their industry. However, the question of how much manpower the OHSAA can devote to youth sports regulation remains unanswered. "We would certainly be willing to be a player in helping youth sports move in the right direction," Ross says.

Not everyone feels that state association oversight is necessary. John Engh, chief operating officer of the National Alliance for Youth Sports, points out that his organization already offers numerous resources to help communities regulate and provide oversight on the local level. "We have worked with many communities in Ohio that have taken steps to ensure that the youth sports programs running in their communities are safe and positive and put the interests of the children first," Engh says, adding that he questions the ability of a high school organization to provide such regulations. "I am not sure that an organization that oversees competitive sports on school-owned properties can offer the same perspective as organizations that are focused on recreational opportunities for children, as NAYS has done for 30 years."

Whatever the outcome, Engh and Ross agree that it is up to community leaders to demand that rules and regulations are enforced to provide a safer and more rewarding experience for young athletes. "We would be willing to sit down and have a conversation with legislators," Ross says, adding that, "if we didn't, we wouldn't be serving our people well."