One on One: Editor Andrew Cohen Reflects on 20 Years with Athletic Business

He's not sure what's more personally significant, reaching 50 years of age or 20 years of employment at Athletic Business, but Andrew Cohen passes both anniversaries in 2011. 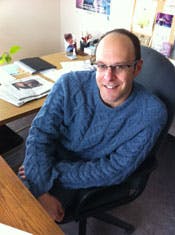 He's not sure what's more personally significant, reaching 50 years of age or 20 years of employment at Athletic Business, but Andrew Cohen passes both anniversaries in 2011. His first day with the magazine, as associate editor, was Jan. 2, 1991, and before he could begin writing anything, he needed involved instructions on how to use his newfangled desktop computer, which required the insertion of seven different floppy disks, in the proper order, to work on AB, and a different set of seven numbered floppies to work on sister magazine Hardwood Floors. He survived such austere beginnings to become senior editor of AB in 1995, and took over as editor in early 1998. Paul Steinbach, himself an 11-year veteran of the magazine, asked Cohen about a time for which there are no written records.

Q: How did you get here?
A: I moved to Madison from New York City basically blind; I came for a weeklong visit in June - definitely the time of year to get smitten with Wisconsin - and by August, I'd quit my job, packed up a U-Haul and moved here. I freelanced a little and shot a lot of pool waiting out a recession, and landed the associate editor job in late December.

Q: Had you been aware of Athletic Business before coming to Madison?
A: By the time I settled on Madison as my destination, I knew it was published here, since I sent resumes to pretty much every magazine and newspaper in the city in the months prior to moving. But I actually was aware of it earlier - I recall flipping through copies of AB while waiting my turn to play squash in a round robin with friends at a club in Woodstock, Vt., in about 1987. Now it amazes me to think that the magazine was only 10 years old at that time.

Q: Do you think playing sports is a prerequisite to writing about them?
A: With what we do, maybe experience running a business would be better, but it's a specialized enough field that I think hands-on experience helps. Fortunately, I've played a lot of different sports; I'm not that much of an athlete, but I can fake my way through pretty much anything except basketball. My current obsession is soccer, which I only took up about three years ago.

Q: If you had to counsel someone on how to become an editor, what steps would you suggest?
A: There's really only one step - interest in the subject matter. I mean, I never took a journalism class. I was a literature major; I wrote my master's thesis on how Edith Wharton's torrid midlife affair informed The Age of Innocence. My first big success was a feature in The Village Voice about amputee golfers. Nobody who follows that path will get anywhere.

Q: How easy was it for you to become immersed in the athletic, fitness and recreation industries?
A: I had written a few stories on the business of sports, but coming to AB meant a pretty intensive learning curve. During my first week on the job, I wrote a marketing column about a guy named "Mr. Trash" who roamed the aisles of a minor-league ballpark, and then I was given all of three days to write a feature on opening up commercial pools after the winter season. Scorsese's sequel to "The Hustler" was recent enough so I could call my story "The Color of Algae" without confusing too many people.

Q: Riffs on movie titles are kind of an AB standard.
A: That was probably my doing; I love movies. But the headline I'm proudest of was for a really small item on the back page on the emergence of Power Yoga; I called it "Mantra-Diction." I wish more people had seen that one.