Sara Beth Gideon took an unusual approach with her senior thesis at Middle Tennessee State University Honors College. Instead of simply putting her research into words, she created a dramatic exhibit, "Communities, Competitions and the University Campus, 1926-2010." 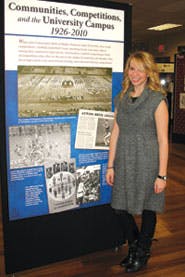 Photo of Sara Beth Gideon with her exhibit, Communities, Competitions and the University Campus, 1926-2010

Sara Beth Gideon took an unusual approach with her senior thesis at Middle Tennessee State University Honors College. Instead of simply putting her research into words, she created a dramatic exhibit, "Communities, Competitions and the University Campus, 1926-2010." Gideon's thesis, which was the first of its kind presented as a history exhibit, combined her passions for sports and museums. The exhibit is on display at the Heritage Center of Murfreesboro and Rutherford County and features great moments in MTSU athletic history, including appearances by legends Terry Bradshaw at the Grantland Rice Bowl in 1969 and Magic Johnson at the NCAA Tournament in 1979. The campus has also hosted state high school football and basketball tournaments since the 1920s. AB Creative Director Catherine Liewen asked Gideon about her year spent working on the exhibit, which runs through May.

Q: What was the inspiration for your project?
A: I've been interested in athletics ever since I was little. Part of my project is focused on the Tennessee Secondary School Athletic Association, and my grandfather used to be the head, so I had good contacts with them. In addition, the MTSU centennial is this year, and I wanted to do something that would celebrate the centennial but wouldn't necessarily be something that everyone knew about.

Q: Were there any surprises with the project?
A: As I did my research, the project revealed itself to me. I originally had no clue about the 1979 NCAA Tournament. Also, I didn't know how long the tournaments have been going on at MTSU. I also didn't realize that the first girls' basketball state championship in Tennessee was held here in 1926.

Q: What's in the exhibit?
A: There are a lot of pictures and artifacts. The highlight is a 15-mm promotional film from the 1967 Grantland Rice Bowl donated by Wayne Belt, who used to chair the bowl. It highlights the year that Tennessee A & I (now TSU) and Ball State played. It was the first time that an all-black team played an all-white team in Tennessee. It features Monte Hale, MTSU announcer, calling the game. We were really excited when we got it.

Q: Are you happy with the result?
A: I successfully defended my thesis to the Honors College a couple of weeks before the opening. I was impressed that I was able to get this done, because there were several points where I felt like I bit off more than I could chew. It's definitely the biggest achievement so far in my life. I'm very happy with the way it turned out.

Q: What are your plans for the future?
A: I graduate in May, and I go on to MTSU Grad School after that. They have a history program with a concentration in public history, and that is museum work, so I'll be going on to do that and hopefully continue on to work at the Heritage Center.