Former Harvard University football player Chris Nowinski estimates that he suffered at least five concussions by the time an opponent's boot to the chin knocked him out of professional wrestling in June 2003. 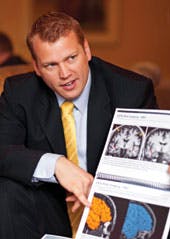 Nowinski has since overcome (with the aid of a daily stimulant) persistent issues with memory and focus to author the 2006 book Head Games: Football's Concussion Crisis. A year later, he co-founded the Sports Legacy Institute in partnership with Boston University, where he is pursuing his doctorate in behavioral neuroscience. With Nowinski making the calls for donations, SLI has secured and studied the brains of 85 deceased athletes and military personnel for evidence of chronic traumatic encephalopathy, a neurodegenerative disease brought on by repeated blows to the head. Paul Steinbach asked the 33-year-old Nowinski, who sat on the committee that led to a change this season in the way Ivy League schools conduct football practices, about his own current state of mind.

Q: What do you think about former players suing the NFL, alleging the league withheld intelligence about head injuries for decades?
A: I know there are a lot of former football players out there suffering from symptoms of CTE. When I wrote my book, I talked about the fact that I thought the NFL at that time was preventing the truth about the issue from getting to the players. The courts will work out what that all means, but I think it's a shame that there are so many guys out there suffering, and a lot of them don't have the ability to get medical coverage. They don't have the ability to hold down jobs anymore.

Q: Is legislation an effective vehicle for changing the way sports are conducted?
A: Legislation has been a fantastic avenue for mandating education, no-return-to-play-same-day policies, and visits to healthcare professionals for clearance. It has been incredibly powerful for what we've asked it to do, but it's also going to be limited in terms of actually reforming individual sports, changing practice habits and changing mind-sets.

Q: Do those who argue that youth and even high school football should be abolished altogether have a point?
A: There should be a discussion about what the appropriate age is to start exposing children to systematic brain trauma, and there should be a discussion about how much is too much. Maybe playing at six is twice as bad as playing at 12, and that's twice as bad as playing at 18. Who knows? It's going to be some of the hardest information to quantify. What are 1,000 hits to the head of a 10-year-old really doing to his brain? If evidence is gathered and people grow to understand this, maybe we switch early exposure to football to flag football, where you learn the rules without the brain trauma. I think people's minds will be open to that in the future.

Q: Are you at all fearful for your own future mental health?
A: I realize that I'm in a high-risk bracket, based on the work that we've done at BU. Most of the guys in our population who played college or pro football have had CTE. But I also know that it's not going to be everybody, so I keep my fingers crossed and use any concerns as motivation to do the research.