In 2011, the City of Boise (Idaho) Recreation Department spent $128,000 cleaning up and repairing damage from vandalism in its parks. 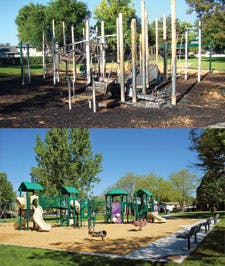 In 2011, the City of Boise (Idaho) Recreation Department spent $128,000 cleaning up and repairing damage from vandalism in its parks. Graffiti made up the majority of the 161 incidents, but amounted to six percent of the total cost, while arson, specifically one catastrophic playground fire, accounted for 88 percent. Prior to 2011, the cost of park vandalism had been steadily decreasing to a low of $31,500 in 2010, despite 249 individual incidents having been recorded that year.

"Our numbers on vandalism and crime are actually low," says Eden Belanger, infrastructure manager for the city's parks and recreation department. "It's because of the city's commitment to a 24-hour response. We're very aggressive, trying to catch and respond to vandalism immediately."

At best, vandalism places a financial burden on parks departments, one that many can ill afford to bear. At worst, vandalism can shut down facilities or entire parks, an action no department wants to take. Summer is a busy time for parks and recreation departments, their facilities and programs teeming with activity, but it is also when most communities typically see the combination of nicer weather and idle youth lead to a spike in vandalism.

While focusing on programs to keep youths occupied helps alleviate the problem, it's not a cure-all. The illumination of the costs helps drive awareness and prevention in Boise and other communities, highlighting the importance of preventive measures - lighting, fencing and camera surveillance - that keep vandalism from happening in the first place. However, many communities are finding that these are no substitutes for dedicated security patrols.

Belanger cites the department's good working relationship with local police as a factor in the city's low vandalism rates, as well as involved community and educational programs. The department's yearly vandalism report is published on its website, partially to raise awareness of the issue. "I like to think that by educating, by putting it out there, it's saying to the taxpayer, 'You're giving me this much a year, and this is how much I'm spending on vandalism. Help me not spend,' " says Belanger, also noting the annual report's value in deterring potential youth vandals. "When we see a spike, we'll get an officer to go to the school in that area with this report and say, 'You know, if we didn't spend this $3,000 repairing a restroom, we could put in a soccer goal.' "

While police departments often work closely with parks and recreation departments to provide extra attention to problem areas - police in Peoria, Ariz., are asked to sit in parks while completing paperwork, for example - more serious issues often call officers elsewhere. Realizing the need for a more reliable security force, the Shawnee (Kan.) County Parks and Recreation Department commissioned its own parks patrol in April. "Both the Topeka city police and Shawnee County sheriffs are pulled in so many different directions," says parks and recreation supervisor John Knight. "I'll be able to send our guys right where they're needed within the parks."

Previously, a team of officers were employed by and took orders from the sheriff's department but reported to the parks and recreation supervisor, a less-than-ideal arrangement. "We had kind of been operating as a deputized unit under the sheriff's office," says Knight. "The biggest benefit to me is that now I get to set that priority as opposed to the sheriff, who has a plethora of priorities."

The officers maintain their full police powers and are able to issue citations and make arrests, but their workload also encompasses more specific park duties. "Our park police officers enforce the boating regulations, especially on weekends and holidays," says Knight. "They run the campground we have out here, which is 24 hours. They perform walkthroughs at our baseball complex. They're right there and on-site if any issues come up."

In evaluating his department's needs, director Seve Ghose decided on a different course for the City of Davenport, Iowa's parks and recreation department. While the department did not have any serious vandalism issues, little incidents were still taking their toll on the department's image. Says Ghose, "By the time staff got around to fixing something or noticing it - graffiti, vandalism, and things like that - the damage was already done in the public eye."

Similar to Boise's goal of addressing vandalism issues within 24 hours, both to deter other vandals and protect the parks' image, Ghose felt that the city needed a way to respond more quickly. "Initially, we wanted to have park rangers, but we toned it down from ranger to ambassador. We wanted to send a more positive message and be more educational than punitive," he says. "Instead of a confrontational approach, it's more of a neighborly approach."

Unlike Shawnee's park police, Davenport's ambassadors - seasonal employees who patrol the parks from 8 a.m. to midnight - lack the power to issue citations or make arrests, but they have found they don't need to. "In the month and a half that we've been tracking, calls for vandalism have gone down dramatically," says Ghose. "The car our ambassadors drive has a light and a big sign that says 'ambassadors' on the side, and people notice."

Though connected to the police department via radio, the ambassadors didn't have to make any calls during the program's first six weeks. Recognizing the value of a physical presence in deterring vandals, the Boise police department operates a similar program utilizing a citizen force. "In our larger community parks, the police have implemented a volunteer police program," says Belanger. "That force is out there in our parks. They're visible - they wear uniforms, they drive carts that are marked. They make it challenging to get away."

Quantifying the cost savings of a park security program is difficult, especially considering the secondary benefits such programs offer. In Davenport, the parks ambassadors are also responsible for picking up incidental litter, as well as serving as a resource for visitors. "If someone has a question about facilities, parks or programs, they're able to dispense that information," Ghose says.

Even in Shawnee, it's only natural that the park officers fulfill additional roles. "They're here at the times when most people are here, so they also turn into ambassadors," says Knight. "It's hard to find people with both law enforcement and public relations training."

Ghose is happy with the effect Davenport's parks ambassadors have had. "It's a way to keep your parks a friendly place," he says. "Being forward thinking results in a huge savings on equipment, resources, time, effort - everything."