Plans For Rec Center Threaten the Peace in One Ohio County

Plans for a new rec center threaten the peace in one Ohio county. 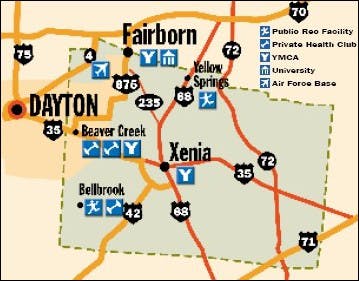 In the long campaign between nonprofit and for-profit fitness centers, Ohio remains at the center of the debate.

The Ohio Parks & Recreation Association is leading the effort to reach some kind of understanding with local for-profits and their national organization, the International Health, Racquet and Sportsclub Association. Yet it is here, more specifically in the booming southwestern corner of the state, that nonprofit and for-profit forces are poised for the next big battle.

Greene County does not appear, at first glance, to offer many fitness options to its residents. A roughly rectangular county of 415 square miles, it is a primarily rural landscape that is becoming increasingly suburban as Dayton, located in adjacent Montgomery County, continues its creep toward Xenia, Greene's county seat. Most of the county's population, 73 percent, resides in or west of Xenia.

And so do its fitness options. The list of for-profit health clubs runs to three: two in Beaver Creek, on the Greene-Montgomery line, and one in Bellbrook. There are just two public facilities: one in Bellbrook that features mainly meetingroom space, and a converted school building in Yellow Springs that has offices, a gym and meeting space, but no fitness equipment. There are also three YMCAs, in Beaver Creek, Xenia and Fairborn. The Y fitness centers are small and limited in scope, although Moore argues that size is relative. "They might seem small when compared to the new $25 million Ys," he says.

Moore also believes he has two other, larger Greene County competitors. Wright State University, which has a Dayton address but is actually located in Fairborn, has two fitness facilities, which Moore charges are open to the public. "You can join the alumni association whether you went to school there or not, and then you're able to use the facility," Moore says.

Not so, says Jean Denney, Wright State's recreation director. One facility's access is so restrictive that even faculty and staff can't use it without purchasing a fitness center membership; the other allows students, faculty and staff to bring a limited number of guests with them.

Moore's other nemesis is Wright-Patterson AFB, which has several fitness facilities that are open to its 7,000 or so active military personnel, 13,000 civilian employees and (in a few limited cases) their guests. A Wright-Patterson spokesperson, Sue Baker, denies its facilities are open to the public (there is also some evidence suggesting that many civilian employees prefer to pursue recreational options off the base), but Moore is not appeased. "I've been competing against them for years, and I know how the system really works as opposed to how the rules are supposed to work," he says.

Whatever the truth of these claims and counterclaims, the fact that Greene County's fitness options hug its far western perimeter has led the Greene County Recreation, Parks & Cultural Arts Department to consider two competing philosophies when scouting out locations for its hoped-for recreation center, according to Tim Leiwig, the department's executive director.

Moore characterizes the situation a little differently. "It's supposed to be a county facility," he says. "When they first started, the idea was for it to be centrally located, near Xenia or a little to the east of Xenia. But they redefined 'geographic center,' saying then that it was going to be in the center of the population. My prediction is that since they're trying to compete with me, they'll try to build it as close to my club as possible."

Debates over where to put a new rec center are already one step ahead of the debate that Moore wants to take to the public: Why build a rec center at all? Moore believes building and operating fitness centers is not a legitimate governmental function, and that for-profit clubs can meet people's fitness needs.

"We're an exercise facility, not a place where you'd see children's programming," Moore concedes, "but we take people from about 12 to 13 years of age and older, and we have day care." At the same time, Moore volunteers at a Dayton rec center, teaching self-defense to children. "That's a legitimate rec center that services poor children," he says. That's what they're for; they're not supposed to be welfare for yuppies."

With Moore primed for a fight-he's already halted the construction of a hospital fitness center in nearby Springfield, helped kill a publicrec-center referendum in Miamisburg (a Dayton suburb) and inserted himself into referendum battles in two other nearby communities-the recreation department may be forced to alter its fitness center plans or abandon the western part of the county to avoid war.

Michelle Park, OPRA's executive director, says that reducing or eliminating the rec center's fitness component would be a way to neutralize dissent. Another would be to choose a central location and stress to voters the ways in which a public recreation center differs from a for-profit health club-its accessibility to everyone, its lack of initiation and monthly fees and its focus on family.

Of cutting out the fitness component, Leiwig says, "I think it would be a consideration, except that information we've received from school-age kids is that they don't have access to fitness equipment in the schools outside of their sports' seasons. If there's strong demand from youth and teens, we probably have to address that in some capacity."

Could health clubs pick up the slack? "If somebody came forward and said they could take care of that age group, we'd look at it," says Leiwig. "I guess it's possible that health clubs could pick up the slack, but if you look at the clubs that are here, it's not their market, nor has it been a consideration for them. Kids are not the group that a typical club is designed for."