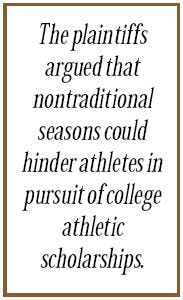 What if someone told you that you had to choose between your two favorite sports-that you could only play one of them? This was the dilemma faced by 11 young women from Suffolk, Va., who sued the Virginia High School League for requiring girls to compete in nontraditional seasons.

The young women's suit, Alston et al. v. Virginia High School League invoked both Title IX and the Constitutional argument of equal protection. While the case's outcome-in favor of the young women-overturned earlier case precedent, the favorable decision is not surprising given the direction of recent court decisions involving Title IX. This case shows not only the steadily increasing strength of Title IX, but its ever-widening scope.

Title IX of the Educational Amendments of 1972 is one of the most widely debated policy issues in interscholastic and intercollegiate athletics-even though, interestingly, athletic programs are not specifically mentioned. Enacted to prohibit sex discrimination, the legislation states that "no person in the United States shall, on the basis of sex, be excluded from participation in, be denied the benefits of, or be subjected to discrimination under any educational program or activity receiving federal financial assistance."

The history of Title IX has seen a host of different policy interpretations. Although the legislation was passed in 1972, it was not until 1979 that the Office for Civil Rights offered a policy interpretation that attempted to clarify any ambiguities that existed in the law. However, during the 1980s the strength of Title IX, as well as the women's athletic movement, suffered a number of legal setbacks-most notably, when the U.S.

Supreme Court decided in Grove City College v. Bell 465 U.S. 555 in 1984 that Title IX did not apply to private athletic departments that did not receive any direct federal financial assistance. Nevertheless, Title IX has gained momentum since the passage of the Civil Rights Restoration Act in 1988. That piece of legislation counteracted the Grove City case by deciding that Title IX applied on an institutional level, not on a programmatic level. This basically means that if an institution, rather than simply an athletic program, receives any kind of federal financial assistance, whether it is direct or indirect, administrators must abide by the principles of Title IX or face sanctions from the Office for Civil Rights.

Equal-protection arguments, which are based on the 5th and 14th Constitutional amendments, declare that "no state shall deny to any person within its jurisdiction the equal protection of the laws." When dealing with equal-protection cases concerning gender discrimination, legal precedent dictates that the defendant must show that the rule being challenged serves an important, yet not necessarily compelling state interest. This situation makes it difficult to overturn rules that are viewed by the plaintiffs as discriminatory. The defendants are only compelled to prove that there exists a rational reason for the rule.

With the strength of these laws on their side, 11 young women decided to challenge what they saw as the discriminatory practices of the VHSL. High schools in Virginia are categorized based upon enrollment, anywhere from Group A to AAA, and schools in the different categories hold certain girls' sports in different seasons. Were a school to change classification, by increasing or reducing enrollment, girls would be forced to choose between sports that they may have previously played in separate seasons.

Specifically, Group AA girls who played field hockey, volleyball and tennis had to make a difficult choice when they were moved to Group AAA, because these three sports all were scheduled during the fall season. The key element to this lawsuit was that sports seasons for boys were the same across all school classifications. This was the basic premise for the 11 young women: Why should they have to choose between sports they enjoyed while their male counterparts did not have to make that same tough decision? Another issue was that the nontraditional seasons could hinder athletes in pursuit of college athletic scholarships. Generally, college recruiters can only budget enough money to make recruiting trips during one season, leaving girls playing in nontraditional seasons at a huge disadvantage when attempting to gain recognition from college coaches.

As an entity that receives federal assistance, the VHSL clearly fell within the boundaries of Title IX, and it only took a jury three hours to find the governing body to be in violation of Title IX and the equal-protection clause of the U.S. Constitution.

The VHSL insisted that the majority of female high school athletes did not want the nontraditional-season policy changed. The league cited a statewide survey, conducted in 1998, that found that 76 percent of female basketball players in Group AAA (large schools), 65 percent in Group AA (mid-size) and 73 percent in Group A (small) preferred to keep the seasons as they were. The VHSL maintained that it was not discriminating against the young women because the majority of the female athletes did not want to change seasons.

Another argument that the opponents of changing seasons used was that it would wreak havoc upon the organization of high school athletic departments. Ed Allen, the athletic director at New Kent High School, said switching seasons would make scheduling practice time for both the boys' and girls' programs problematic. "The girls really liked having their own season," Allen said.

"They liked having their own gym, a special place to practice, so they could practice whenever they wanted and nobody could kick them out." (Proponents of the decision view these logistical problems as only temporary.)

The majority of Title IX litigation involving female participation in sports has centered on the lack of participation opportunities or scholarships for women; nontraditional seasons have not been the target of many lawsuits.

In 1982, a young woman brought action against the Minnesota State High School League because boys' and girls' swimming took place in different seasons. The court in Striebel v. Minnesota State High School League [321 N.W. 2d 400 (Minn. Sup. Ct. 1982)] decided for the athletic association, determining that there was a reasonable motive for separating the seasons-there was not enough pool time for boys and girls to share. To show reasonable motive, the MSHSL only had to show that there was a logical reason for separating the seasons and to prove that facilities for males and females were equal.

In 1986, a Montana court refused to change the policy of conducting girls' basketball in the fall and girls' volleyball in the winter, even though this was uncommon in the rest of the country and did not apply to the boys' programs. The court, in Ridgeway v. Montana High School Association [633 F. Supp. 1564 (D. Mont. 1986)], believed that changing the seasons would not "accomplish the goal of maximizing participation."

It is interesting to note that the defendants in both of these cases were successful in using cost and space issues as legitimate reasons for separating seasons. This defense, however, was not successful in the VHSL case. The issue presently facing the Virginia courts, pending a possible appeal of the decision by the defendants, is how the VHSL will realign its sports seasons. The 11 women-most of whom graduated during the course of the three-year trial-are requesting that the sports be held in traditional seasons across all enrollment groups: volleyball in the fall, basketball in the winter and tennis in the spring. This plan would alter the seasons of the 175 high schools in Groups A and AA. Parties on both sides are attempting to negotiate a plan that would gradually change the scheduling over a four-year period so everyone involved in girls' sports would be able to plan accordingly.

Given the case precedent in this area, the Alston decision is quite significant. Antiquated practices of gender inequality are being challenged with increasing frequency and success; there are now only five states, including Virginia, that conduct girls' sports in nontraditional seasons, and all but one of these states are facing legal action to change their seasons. This case decision reinforces the arguments of plaintiffs in pending cases across the country.

It is imperative for athletic administrators at all levels to be aware of federal legislation when reviewing and revising athletic rules. Gender-equity issues involving scheduling, facilities, funding, recruitment, publicity and coaching are among the areas that an athletic administrator must make sure are not in violation of Title IX and equal protection.