The Importance of Youth Commissions

The Importance of Youth Commissions 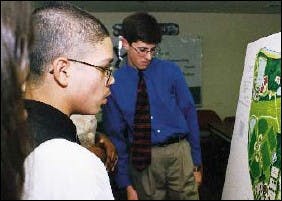 The construction vehicles will start rolling into Santa Clara, Calif., this month. Spurred by a request from the city's young adults, a new teen center is being created to address needs not met by the youth center across the street, which offers a gymnasium and two large activity rooms. Featuring a patio overlooking the skateboard park, plans for the new center also call for a coffee bar, study rooms, computer labs and other social spaces.

As concerns about school violence and antisocial behavior escalate, community leaders increasingly view parks and recreation as a solution. But while many communities have built teen centers or added programming alternatives, not all have been successful in reaching the target group.

In the wake of the shootings at Columbine High School, government and community agencies in Littleton, Colo., created a teen center to offer young adults a place to play pool or table tennis, dance or just hang out. A year later, organizers remain disappointed by the center's lack of use. Meanwhile, community members in Jacksonville, Fla., are banking on just such a teen center to answer youth needs in their area. Current plans would convert a former school into a community center with areas for teens to gather and play a variety of games. When Sandpoint, Wash., was plagued by a rash of bomb threats following the Columbine shootings, the city held a series of town meetings, all of which pointed to the need for a safe place for kids to congregate. After watching a similar plan get nixed in a community just 45 miles south of Sandpoint, however, city officials are keeping ideas broad, ranging from an ice rink or classrooms to a counseling center or climbing wall.

How can park and recreation departments know what will succeed and what will fail in their own particular communities. One theory states that violence and antisocial behavior stem from teens' isolation from one another, implying that facilities and programming should be created to unite teens. Some scholars are taking this a step further, claiming that teenagers have been increasingly isolated from their communities, that the regular interaction with adults that was once a part of everyday culture has dwindled to a trickle. These claims imply a need to integrate young people with the broader community. The answer some cities have found combines the two ideas by creating teen boards and commissions to advise the municipal government. Some officials have even hired young people for positions in governmental departments. Not only does this allow teens to interact with adults in an environment in which their opinions are valued, but it allows young people to offer their input on projects designed for their age group, as well as on overall community planning and design. Teens gain not only community respect by pointing out inadequacies in city planning or programming, but also the opportunity to organize and manage both teen- and community-oriented activities.

Santa Clara's future teen center is the product of recommendations and planning by the city's 15-member Youth Commission. Members of the commission specifically targeted needs not addressed by the current center. The group, formed about five years ago, is also responsible for the creation of a skate park and two high school scholarships, as well as a wealth of teen-oriented programs. Appointed by the city council through an interview process, members handle most of the work themselves. All that is needed from the parks and recreation department is a staff person to facilitate meetings and activities, and to guide young people through planning processes.

"It's not hard, but you have to really want to do it," says Larry Wolfe, parks and recreation director for Santa Clara. "You need to have the support of the city council, and we did. Then it just takes organizational skills to put the commission together and get it going."

The city of Tustin, Calif., realized it needed a more active youth voice nearly three years ago, and decided to organize the Youth Action Team. Aided by a startup grant, teens were able to make a difference almost immediately. They have volunteered at soup kitchens, landscaped city parks and conducted teen dances, among other activities. Recently, they facilitated a teen forum on zero tolerance, drug use and sexual relations.

The team also allows the city to target youth needs much more effectively. By listening to young people on the Youth Action Team, the city discovered teens did not want a traditional teen center. Instead, Tustin teens felt that the city should build activity-specific facilities, such as a computer room, a skate park or a sports facility exclusively for teens. Young people in Tustin, says parks and recreation director Patrick Sanchez, felt they would be bored in a typical teen center.

"We found that the best people to design programs for teens are teens themselves," says Sanchez. "We put together a group of teens who could tell us what they wanted to do, and then they would find dollars to do it and go from there."

The team even manages recruitment of new members, accepting applications and interviewing candidates. They look for teens who are willing to lead and make time commitments, and who also might have the sway to draw groups to various activities. As in Santa Clara, the only thing required of the Tustin parks and recreation department is a staff member to supervise the team, guiding them through the planning process and identifying potential pitfalls such as security, parking, tickets, cost and other items the teens may not have addressed.

Despite these impressive developments, perhaps the most ambitious youth-driven efforts have taken place in Hampton, Va. As part of a citywide movement over the last decade, young people have been granted a wealth of opportunities and responsibilities. The city's planning department, for example, employs two youth planners as part of its part-time staff.

"We set out to change the mind-set of people in Hampton to view young people as people with a voice, not as kids with nothing to contribute," says Laurine Press, the city's parks and recreation director. "In four or five years' time, the young people I'm working with today will be young parents. I need to listen to them now because in a few years' time, I'm going to see them on another level."

The city is currently placing bicycle racks in locations across town, based on the recommendations of the youth planners, as well as the city's Youth Commission. The commission, appointed by the city council, has an annual budget of about $40,000, which teens distribute to programs and projects designed by young people. Teens also hold seats on the neighborhood commission and two seats on the Parks and Recreation Advisory Board. As full voting members of the advisory board, appointed by the city council, they address a variety of policy-related issues, including participation in a recent discussion regarding the installation of lights at a BMX track. The parks and recreation department also has a Teen Advisory Group, through which young people work on programming issues for their age group.

"We've given young people an opportunity to develop and grow and interact with adults that's way beyond what normally would happen at their age," says Press. "They leave Hampton very well prepared to work and to learn at school. They're not afraid of speaking for themselves."

That confidence is gained through the enormous influence the teens have. When they suggested that meetings were inaccessible to young people, the city's inquiries resulted in a storefront donated by the local mall, to be used for teen meetings, youth speak-out sessions, focus groups and public city meetings. It was young people who, expressing a need for more racial harmony, organized an annual unity march and helped form the city's Unity Commission. Teens have been instrumental in the planning of a 72-acre park, constituting half of the study group for the park and working with the parks and recreation department and professional consultants to create a master plan. They are also key to the development of a teen center, which they hope will offer multipurpose spaces for larger social functions, study rooms, computer labs and artistic space. As in Santa Clara, the teens are satisfied with the recreational facilities already available but wanted a space where they could gather socially.

"You don't have to worry about whether anybody will come because the teens will work with you, and more than likely they will help you provide the program," says Press. "It's a whole different service approach. We used to try to do something for teens. Now we do it with them."