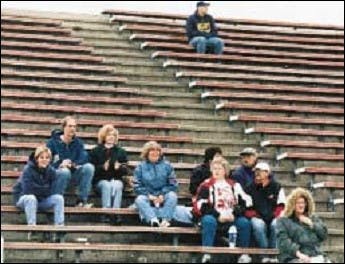 Last season, the Haines City (Fla.) High School football team went 10-2 and advanced to the Class 3A state semifinals before losing to Glades Central of Belle Glade. But during most of the Hornets' successful run, only an average of about 1,000 faithful fans filed into the school's 5,000seat Joe Stangry Stadium each game. In fact, Glades Central supporters who traveled almost halfway across the state to Joe Stangry Stadium for the 3A semifinal practically outnumbered Haines City fans.

That fact does not sit well with the school's athletic director, Jim Pope, especially considering that Haines City fields a quality team. "We had some support, but not like it used to be or should be," he says, adding that the school's athletic program has been losing money for the past several years. "It used to be a given that students and the community were at every Friday night football game. People just have too many choices these days."

Haines City is not suffering attendance woes alone, by any means. Across the country, high school athletic directors bemoan the low turnout at sporting events - especially football - citing a lack of both parental support and community loyalty.

"I can't say we don't get community support; we do," Pope says. "But I don't see any of our alumni football players coming out to even the Homecoming game anymore. There are kids who were star players here, who didn't go to college and still live in town, and they don't come out to the games. People's priorities are different nowadays."

But if priorities are no longer what they once were, that also means those priorities are capable of being changed. At least that's the philosophy of an increasing number of administrators from facilities as diverse as an inner-city Memphis school with a 99.7 percent African-American population and a middle-class, suburban Tampa school with primarily Caucasian students. Their success stories range from staging an eagerly awaited traditional weekend of community activities that kicks off the football season to sprucing up a stadium and making it more inviting to students, their families and the general public.

"People will come to where they feel comfortable," says Patricia Fussell, drillteam instructor at Brandon (Fla.) High School and coordinator of what has become an ongoing, seven-year odyssey of converting the school's 4,800-seat McLane Stadium into what she calls a "pleasure dome." The rejuvenation process began in 1993 when the drill team decided to plant flowerbeds and shrubs at each end of the football field. Successive teams have continued to enhance the area with more foliage donated by local nurseries. Parents and other students got involved, too. Members of the school's woodcraft class contributed picnic tables they built, drill-team fathers constructed rooms beneath the bleachers for storage space, football players renovated their locker and conference rooms, the technology class designed and constructed 5-foot-high "BHS" letters out of concrete to mark the stadium's entrance, and other community volunteers helped create a mural featuring the school's eagle mascot that is painted on one of the concessions stands. All told, local businesses, civic leaders, alumni, booster clubs and students contributed more than $43,000 in renovations and improvements, and 22,000 hours of work. This year's 33-member drill team even received the Hillsborough County School District's EDDIE award for demonstrating group perseverance in achieving goals.

McLane Stadium's park-like setting has become not only a fun and pleasant place to watch games, Fussell says, but it's also somewhere community members go to picnic, jog around the field's track or just relax. "Once you draw the community in like that, people will follow you in other things," Fussell says, adding that local businesses now call her and volunteer to donate building materials, trees and other items.

Despite the football team's lack of a winning record in recent years, attendance has not gone down at Brandon games, Fussell says, because the stadium's ever-evolving amenities keep fans coming back.

But schools need not take on multiyear tasks to help fill the stands. Special events, particularly annual ones that create a sense of community anticipation, go a long way toward building a fan base. The annual Back-to-School Bowl, featuring Melrose High School in Memphis and Dunbar High School in Chicago, isn't just a football game, says Frances Barnes, a Melrose teacher, coach and bowl coordinator. It's a weekend-long event in both cities, where the first game of each school's season is played in alternate years. Past Back-to-School Bowl activities at Melrose have included a battle of the bands, a parade, barbecue contests, face-painting and three-on-three basketball tournaments.

The history of the game can be traced back more than 30 years, when the principals at both Melrose and Dunbar were teammates at another Memphis high school. The two men later became gridiron rivals in college, and renewed that rivalry in 1991, when they were named high school principals at their respective schools. The Back-to-School Bowl has become among the most anticipated contests of the season for students and fans at both schools, Barnes says - even though Melrose always wins. This fall, Melrose will have a new Back-to-School Bowl opponent, Atlanta's Douglass High School, which will travel to Memphis for the inaugural game.

"The community now looks forward to the Back-to-School Bowl," Barnes says. "They expect it; it's become part of their lives." In fact, 7,000-seat Melrose Stadium is packed for the bowl game, as well as for every subsequent game of the season, she says. She attributes that success, at least in part, to the popularity of Back-to-School Bowl events. "Rain, hail, sleet or snow - it doesn't matter what the weather is. We have among the top three largest crowds for high school football in the state."

Football isn't the only sport that sometimes needs an attendance boost, though. That's why officials of the Lafayette Parish (La.) School District invite local personalities - usually elected officials and public service officers - to compete at area track and field meets. Meets often turn off spectators because there are so many activities vying for their attention, followed by long periods of downtime, says James Simmons, district athletic director. But celebrity races run between the high school events give residents a chance to support their local schools and congressional representatives at the same time, while also helping keep the meets from "boring people to death," Simmons says.

The district also keeps a database of its former high school athletes in the hopes of finding new volunteers who live nearby to help organize, promote and run various athletic events. And once a year, several of the district's former players who went on to college or professional careers gather for a basketball showdown before one of the district's middle school basketball games. Last season, New England Patriots running back Kevin Faulk and San Francisco 49ers kicker Wade Richey, both Louisiana State University alumni, showed up. Participating players sign autographs, raffle off the game ball and hang out with the many fans who attend the event.

Granted, some of these activities may not be feasible for all schools in all communities, but they provide valuable proof that attendance at high school (and even middle school) athletic events can be boosted with some creative planning and programming.

Already, Haines City is gearing up for the 2000 football season, which Pope hopes is the one that finally brings the school back into the black. A more aggressive series of fall fund-raising activities is planned (with proceeds going toward the purchase of uniforms, equipment and other needed items), and most of the school's home games happen to be matchups with big rivals. Doubling last season's attendance is within reach, Pope says.

Meanwhile, Haines City continues to field 30 or so varsity and junior varsity athletic teams - most of which bring in little to no revenue or spectators, although the fan base for at least one sport remains strong. "Baseball has tremendous support," Pope says. "That's not your moneymaker, though. Smaller sports aren't going to make a dime, but you can't deny these kids the right to play."