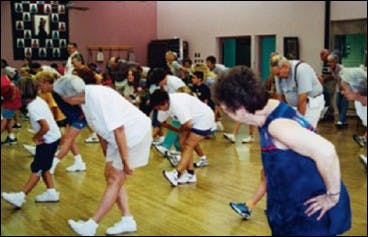 As the number of senior citizens increases, so does their desire for diversified recreation opportunities. Although bridge, bowling and bingo may have defined senior recreation in the past, those activities are no longer enough; the senior population is turning out in huge numbers not just for social interaction, but for exercise. Witness a recently passed $14 million bond issue for a new senior center in Rochester, Mich. Not only is the existing center too small to accommodate its burgeoning participation numbers, it also lacks adequate fitness opportunities to meet senior demand.

"What I've found, not only in our community, but in communities all over the state of Michigan and even the country, is that there is little accessibility for seniors to participate in physical fitness activities," says Marye Miller, director of Rochester's senior center, as well as a board member of both the National Senior Games Association and the Michigan Senior Olympics. "They love to do it, but they don't have facilities available to them."

That's starting to change. The retirement of the baby boomers has spurred many recreation departments across the country to re-evaluate their senior programming. According to the American Dietetic Association, there are currently three million Americans over the age of 85. By 2040, experts predict that number will quadruple to more than 12 million. Seniors will live longer, with a better quality of life, and they will be looking for fulfilling activities to fill their time. Many recreation departments and senior programmers are already seeing this shift, and they're making changes to accommodate current and future demands.

Rochester senior citizens and members of the city's Older Persons' Commission used a personal approach to create community awareness of seniors' changing needs. They hand-wrote 21,000 letters and addressed them to younger community members, explaining why they needed a larger, more diversified facility. The existing 25,000-square-foot senior center can no longer accommodate the participation numbers, which have grown to about 400 people a day, according to Miller. Although the existing center offers aerobics, personal training and exercise equipment, the Older Persons' Commission has to provide seniors with free transportation to city recreation facilities for fitness and sports activities such as basketball, volleyball and swimming. The new center would allow seniors to participate in sports and fitness activities onsite. "We did our homework for a year-and-a-half," says Miller. "We let people know what we wanted, and we did it through personal contact. That really was the key to get people saying, 'Oh, we hadn't thought about that, but it's a good idea.' "

The handwritten letters paid off when Rochester and neighboring Rochester Hills passed the bond proposal for the new senior center, 1,051-381. Plans for the new 84,000-square-foot facility include a wellness center, a gymnasium, a walking track, and therapeutic and exercise pools. Funds from the sale of the existing center will be put toward the new facility, which is expected to open in fall 2002.

Not only did the bond proposal pass by a large margin, it also brought attention to Rochester's senior programs, creating interest among an even greater number of area senior citizens. In the six weeks after the bond passed, 340 new people registered for senior programs. And whereas Miller had always experienced difficulty in recruiting members for the senior advisory council (which includes 15 senior citizens), she received 20 applications for five open positions. "Even though we think we get the word out to people and that everyone knows who we are, the bond issue was a big plus," says Miller. "If we're in the new center after a month and a half and haven't doubled the number of people who take exercise classes, I'll be shocked."

Also anticipating senior population growth is the St. Paul (Minn.) Parks and Recreation Division, which two years ago began re-evaluating its senior programs. "We're trying to get ready for 2005, 2010 and 2030," says Ron Hauth, special programs supervisor for the division. "We realized that we wouldn't be ready because our resources couldn't do everything for everyone."

The recreation division also put together sever al focus groups made up of senior participants. The object is to get input directly from seniors on what recreational activities they're currently participating in and what other activities they'd like to do, as well as determine the average age of participating seniors in St. Paul. "We found out that the average age is 74 years, and that surprised us," says Hauth. "Why aren't younger seniors involved, and if they are involved, what are they doing? I'm guessing that younger seniors, those with discretionary dollars, are spending them in health clubs, where they won't be classified as seniors." The advisory council is still in its early stages, and Hauth points out that its current purpose is to build a foundation from which to begin answering these types of questions and restructuring programs to meet the changing needs of seniors.

Although the advisory group is relatively new, changes in programming have already been implemented. In addition to traditional programming such as bowling, darts and cards, St. Paul offers walking activities, a hiking group, golf leagues and "Swimnastics" classes - all sought-after activities among seniors, according to Hauth.

Senior activities in St. Paul take place at 16 of the city's 41 recreation centers. But unlike Rochester, there is no existing center dedicated exclusively to seniors, nor is one planned. "I thought a centralized health club for seniors would be a perfect fit," says Hauth. "But when we asked our focus groups, they wanted it right in their own neighborhood for easy access, so it just wasn't a good fit for them. Maybe it's something that will occur down the road, but it won't be anytime soon."

Even cities with existing senior centers are recognizing the need for additional physical fitness programming. Albuquerque, N.M., has seven senior centers and 10 satellite senior centers that offer education, recreation, socialization and wellness activities. Hour-long fitness classes are offered at each center, as well as gentle exercise classes for seniors with physical limitations. Regular fitness classes include low-impact aerobics, calisthenics and floor exercises. Also offered are yoga, tai chi and meditation classes. The regular exercise classes are by far the most popular activity, according to Lydia Succi, director for the Department of Senior Affairs for the City of Albuquerque. Succi adds that some of the centers have as many as 150 people participating in an exercise class at one time. Although none of the centers have swimming pools, the department of senior affairs transports seniors to the University of New Mexico's therapy pool, where certified aquatics instructors conduct adapted aquatics classes.

In addition, Albuquerque was recently awarded money from the State Legislature to build a fitness center for seniors. The city is currently in the process of awarding a contract to an architect, and plans call for the center to be completed within the next two years. "The fitness center will focus on strengthening, because that's not something that we do with the exercise classes," says Succi. "We want to help seniors strengthen their muscles, so we'll have lots of cardiovascular and weight-lifting equipment." The city plans to continue its partnership with the university for aquatics activities.

Regardless of how recreation departments grapple with the rapidly growing senior population, most departments realize that they must do it in such a way that seniors keep active, both in mind and body. "We know that colleges and universities have hooked into the senior citizen population, offering classes that seniors can participate in," says Hauth. "The numbers in that area are growing, so we know that seniors want to stay educated. We're trying to figure out how we can catch that fire."