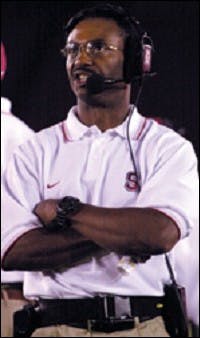 In the past, the Rev. Jesse Jackson and representatives of his Rainbow/PUSH Wall Street Project have waited until the end of the college football season - with its spate of firings and hirings - to rattle the NCAA's cage regarding the lack of racial diversity among Division I-A coaches. Not this year.

"We believe now that this has got to be an ongoing thing," says Charles Farrell, director of Rainbow Sports, who joined Jackson in a July 26 discussion of the issue with NCAA President Cedric Dempsey. "The pressure has got to be constant. We decided this year to address the situation before the college football season even began."

Why the sudden urgency? Of the 115 teams currently playing football at the Division I-A level, only five are led onto the field by African-American head coaches. That's down from seven last season and an all-time high of nine in 1994. According to Farrell, 156 Division I-A football coaching positions have opened since 1992, and only 12 have been filled by African-Americans. Considering that more than half of all Division I-A football players are black, it's not surprising that the promotion of black football coaches is a popular talking point among black leaders in and out of athletics.

"We've all got to do a better job," says Bob Minnix, an associate athletic director at Florida State University and president of the Black Coaches Association. "What we're doing now isn't working. The numbers are going backward."

So far, efforts to promote racial diversity among Division I-A football coaches have amounted to little more than the circulation of lists touting the coaching qualifications of available black candidates. A San Francisco-based firm called The Level Playing Field has taken the idea a step further by building a database on the Web (www.tlpf.com) of qualified black football coaches and their credentials. While even the NCAA will circulate names on request, Rainbow Sports is taking a more proactive approach with its list of "at least 50 African-American coaches that we think could step into Division I-A football positions tomorrow and achieve great success," according to Farrell.

"We'll essentially know six, seven weeks into the football season who's not going to be at a given school next year," he says. "We don't want to hang around like vultures, waiting for coaches to sort of drop dead, but once you lose six games, you're not going to a bowl. We'll know, and we'll be prepared to send those athletic directors our list with our expectations that we will see some of those names appearing on a list of interviewees for that job."

Not meeting that expectation will at least bring the institution under suspicion of being biased and discriminatory, Farrell says. "I can definitely see Rev. Jackson going to a recruit's house to say, 'Look, here's the reason you don't want to go to this school.' Once you see two or three blue-chippers turn their backs on certain schools, you will see a lot of schools change in a hurry."

As further means of holding schools accountable for their hiring practices, Rainbow Sports is currently drafting what it calls "Articles of Principle," which it hopes the NCAA will adopt. Among them is a decree that institutions with a coaching vacancy call on a certain percentage of qualified minority candidates for legitimate interviews (as opposed to cursory exchanges over the phone). "We're asking for credible interviews, because we have found that once African-Americans can get into the interview room and present themselves, there's a good chance that they can level the playing field," Farrell says.

Brent Benner, for one, isn't convinced that's always the case. Founder of Benner & Aló, a Chicago-based career consultancy for professional athletes and coaches, Benner faxed Dempsey a two-page letter July 25 outlining the six things he feels can help separate black college coaches from other job candidates - and most deal directly with the applicants themselves.

According to Benner, many established and aspiring coaches of all races are plagued by weak résumés, a failure to make persuasive arguments on their own behalf to employers, a concern about confidentiality and protecting their current job, a lack of knowledge regarding how to find job openings, poor interviewing skills and, particularly in the case of black coaches, an absence of mentors.

Coaches' résumés too often focus on win-loss records, Benner says. Lacking is reference to what he calls "the behavioral skill sets" and "intangibles" that the coach brings to the job. Coaches also take too little credit for off-field achievements such as solid student-athlete graduation rates and attendance increases. Says Benner, "They need to translate what they're doing in concrete terms and spell it out on their résumés."

While persuasion is critical to good on-field coaching, many in the profession don't present a persuasive case during interviews as to why they're the right man for the job, according to Brenner. "It's a sales presentation," he says. "You've got to make that strong argument as to why you should be hired based on the characteristics you possess, and specifically to that job, what your plan is and what you can do. Being humble and modest, in my eyes, is a virtue, but get rid of that in an employment interview. It's no time to be humble and modest."

Concern about confidentiality often limits a coach's ability to pursue opportunities for fear of losing his current job. Consequently, Benner says, lists of black candidates circulated by the NCAA and Rainbow Sports are going to "rule out a lot of really good people who are concerned about confidentiality." Benner suggests coaches hire an agent or other individual who can scout potential coaching vacancies on their behalf.

Just finding out if job openings exist can be tricky, especially for busy coaches. "These are guys who hardly have time for their family or to sleep, but there are a lot of available resources that they can use to dig up jobs," says Benner, pointing to college and university web sites and to national publications such as USA Today. "The transaction column in the newspaper is one of the first things I read every day."

The final two items on Benner's list are intricately linked to each other and to his own expertise. Coaches can't be expected to be experts on interviewing, he says, but they can certainly benefit from expert opinion on interviewing. Without an abundance of mentors, black football coaches suffer from a shortage of honest feedback about their personality and style, and how these relate to an employer's perception of them. On this subject, Benner pulls no punches. "I don't candy-coat this for my clients: The big business of sports is a good ol' boys network," he says. "It's a white man's world they're entering, and some white people stereotype black people. That's the way it is."

It's a delicate matter, but Benner, who is white, doesn't hesitate to advise black coaching candidates to be conscious of how "street" they talk in an interview setting. For instance, he has coached individuals to not say "wiff" in place of "with." "I'd be remiss if I didn't," Benner says. "I've got clients who are Canadian hockey players who talk too 'Canadian.' I've got to address that, too."

As evidenced by his fax on the eve of the Jackson-Dempsey meeting, Benner feels the NCAA has been remiss in providing black coaches with the kind of concrete assistance that will help them ascend through the Division I-A ranks. "Just trying to get a guy an interview isn't going to cut it. That's the easy way out," he says. "The hard thing to do is to start at the grassroots level - spend some money, take some risks and try some different programs that can really enhance people's skills."

Minnix, who admits the BCA likewise has been behind on this issue during a year in which the association changed both its executive director and home office location (from Somerset, N.J., to Indianapolis), says his organization must explore ways to improve contact between top black coaches and athletic directors at prominent schools. One idea is to block out time at the annual conventions of the NCAA and National Association of Collegiate Directors of Athletics for BCA-sponsored receptions, breakout sessions or golf outings. Athletic directors can then call upon these informal meetings if and when a coaching position opens and they need to establish a pool of job interview candidates.

"We've got to be prepared to do our end of it, because if we are to carry out our mission statement, which is to develop our minority coaches, then we have to spend the money to do just that," says Minnix, who favors face-to-face encounters over lists of names. "That's the only way it's going to get done. There's got to be a comfort level. You know automatically there's a discomfort level just by the color alone. The color alone makes for a barrier. We have to break through that, and that can only be done once I get to know who you are. Then the color has a tendency to fade away."